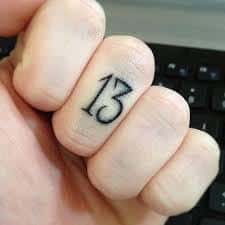 The number thirteen has long been viewed as an omen of misfortune and bad luck. Superstitiously, 13 is associated with death and the fear of dying and is often avoided when possible like the absence of a thirteenth floor in many hotels and skyscrapers.

Some companies even avoid the use of 13, written with letters or numbers, because of its association with bad luck. When the thirteenth day of the month lands on a Friday, that day is seen as a signifier of malevolence for the upcoming weekend and extra precaution is taken by some people. The fear of the number is so common that it necessitates its own term, triskaidekaphobia. This fear is found in different cultures around the world and the number has been recorded in history for centuries as a symbol of bad luck.

There are many different reasons, majorly religious, that this is so. For example; there were thirteen attendees at the Last Supper before Jesus Christ was condemned, some scholars have aligned the crucifixion of Jesus to the thirteenth month of the Jewish calendar, it was believed that a coven of witches contained thirteen members, and Loki, a Norse god of destruction, was numbered the thirteenth god in the pantheon. Contrarily, 13 is considered lucky in some countries such as Italy. While there are many popular ideas about the number 13 and its connection to misfortune, thirteen is open to interpretation and can be used by any individual in countless ways.

Aside from all of its unfortunate associations, the number 13 can signify a special date or sequence. In this way, a “13” tattoo serves as a tribute to a specific memory that may be dear to the individual. The absence of any other symbols, words, numbers, or images ensures that the significance of the design is kept private, divulged to others only by the discretion of whomever received the tattoo.

Many number 13 tattoo designs feature embellishments like line work in the background to add more detail or an interesting font style. Banners are sometimes added as well for those who choose to add phrases or words to the design to help clarify its significance. “Friday” is sometimes tattooed along with “13” to indicate Friday the thirteenth and the negative connotations that are associated with that day. Or, the word “lucky” is integrated in some designs to counter the popular idea of thirteen as an unlucky number, creating a sense of counterculture. Horseshoes, four-leaf clovers, or other lucky symbols are integrated into the design as well. For a traditional, “Sailor Jerry”-style of tattoo, classic tattoo symbols are added like nautical stars, anchors, roses, etc.

Depending on the font chosen for the number, 13 can be filled in with colors or patterns that help individualize a relatively simple design. Often, the “1” is tattooed as a lightning bolt, giving the design a “flash tattoo” style. The number thirteen can be rendered in roman numerals, where the number is written as “XIII”.

No matter what the reasoning is you have decided to get the number 13 tattoo, one thing is certain, you all have the same love for the world of superstition. Down below are further examples of this particular tattoo that has the number most people prohibit from being mentioned.

The classic 13 symbol is the number by itself. The only difference between your 13 tattoo and someone else’s 13 tattoo is the way that the 13 is written. Choosing the best font for yourself is the most important aspect when getting the 13 tattoo. Since 13 is a superstitious number that is associated with bad luck, many people will get the 13 in a font that is more dark or has a Gothic style to it. Depending on how big or small you want this tattoo, you can virtually get this tattooed anywhere on your body that you would like. Also depending on how big or small it is, the bigger you get the tattoo the more likely you will be charged extra money for the ink the artist is providing. You could even get this tattoo as small as your thumb, a neat place to get it is the webbing between your finger and your thumb. The wrist is another great place to have this tattoo placed.

The Lucky 13 tattoo design and image is different than the normal 13 tattoo in the sense that it is kind of a mock to the superstition of the number. 13 is always associated to the public as being a number that is unlucky or can cause harm to you in one way or the other. As mentioned before, the 13th floor on some hotels will be completely absent, instead of going to the 13th floor in the elevator, it skips a number and will just say the 14th floor. Getting a ‘Lucky 13’ tattoo kind of says that instead of the number being evil, why not say it is a lucky number? To those who actually believe in having a lucky number, commonly a gambler will have a lucky number, that number may very well be the number 13. Examples of a ‘Lucky 13’ tattoo would be a hand of cards spread out in a fan with the words ‘Lucky 13’ perhaps even having 13 on the top of the cards with skulls instead of the regular spades.

The 4 leaf clover number 13 tattoo is another popular tattoo to get that also has a fun play with numbers and images. It is also great if you have a love for St. Patrick’s Day or if you have some Irish in your blood. The 4 leaf clover image itself is a symbol of good luck and fortune. The number 13 however as we all know is a number that is associated with bad luck. This concept is just like the lucky 13 image in the sense that it kind of mocks the superstition of 13 being an evil number. Maybe your lucky number really is 13, this is a great way express that. Typically, this is a tattoo that is done somewhere such as the wrist or maybe even the upper arm, as big or small as you want the tattoo, adding color is another option. A green shading or tint on the clover could really bring the tattoo out.

This is another one of the lucky 13 tattoo concepts. A horseshoe is another symbol that is associated with good luck. Most often, those who have this tattoo either have a love for horses, they enjoy gambling on horse races, or both, this is a cool tattoo to get if you are one to be seen walking around the tracks or the stables. This tattoo could be displayed as the horseshoe with the 13 engraved in the design of the horse shoe itself. You could even have the horseshoe with a banner over the top that says ‘Lucky 13’ on top.

One of the more popular tattoos among the tattoo community is the Friday the 13th Jason Mask tattoo. This is a basic tattoo that can sometimes be seen as a special Friday the 13th tattoo for 13 dollars at a tattoo shop. This is more of a cartoonish play on the 13 tattoo in the sense that it is just the basic hockey mask from the horror movie Friday the 13th, along with the number 13 etched at the top of the mask. If you want to get more intricate with this image however, that can also be done. Many people that are super fans of the horror movie Friday the 13th will get a tattoo of Jason wearing his hockey mask with grim detail. 13 is always involved when it comes to these types of tattoos for the pure reason that 13 is the number that is associated with evil and bad luck. Jason strikes on Friday the 13th which makes this a perfect add on to your number 13 tattoo.

With any tattoo, placement is perhaps one of the most crucial parts of starting the process of getting a tattoo. With this being said, it is important to choose a spot on your body where you will have enough room to be able to add more tattoos or have room to do what you want with it. You also want to have a place on your skin where it will not look disproportionate. If you ask your tattoo artist where a good place for the tattoo you have decided on to get placed, they will be sure to let you know what looks good and what areas to hold off on.