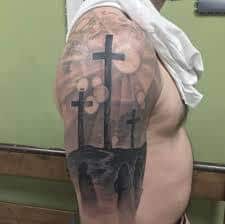 The symbol of a cross is one that we see very often. Usually, the particular person sporting this tattoo has a bit of a religious side. The cross, being the device that Jesus Christ was crucified on, is an essential and most famous piece of Christianity history. The cross is tattooed and displayed as a way of keeping your faith and a reminder of the creator and son of the creator. What is the difference between just one cross, and multiple crosses? Below we will go over this and give other creative ideas to go along with the ‘three cross’ tattoo graphic.

Before we look into this tattoo, it is good to know a little history behind it as well. In the year 1653, a Dutch artist by the name of Rembrandt Van Rijn, decided to etch, or engrave, the scene in which Jesus Christ and the two thieves who were crucified alongside of him. In this drypoint, etched piece of art, the Virgin Mary is seen weeping with the Evangelist supporting her. Roman soldiers on horseback are watching the crucifixion along with grieving citizens, all circling around Jesus and the two thieves. A beam of light shines down through the dark skies on Jesus and the thieves, representing the light from Heaven. This portrait was, and still is, considered one of the most dynamic prints ever made.

The ‘Three Crosses’ print is a pretty intricate piece. Just because it is such a great graphic, it does not necessarily mean you have to get the image tattooed exactly as it is done. Most people with the three crosses tattoo simply get just three crosses and that’s that. There really is no need to go the extra mile of having the entire scene tattooed unless that is what you want, if so then by all means you do that! Just a friendly piece of advice, make sure your tattoo artist is able to sketch this graphic out, and choose a spot big enough for the entire scene to be shown. If you just want three crosses however, that is perfectly fine as well. The three crosses can represent much more than just this old etching.

The Three Crosses Designs and Placement

This tattoo of three crosses can be done in a number of different ways, and to the individual getting the tattoo, it can mean multiple things. No matter what way you look at it, like most tattoos, this one is very dear and is one that has special meaning to said person. As mentioned above, the three crosses are a religious tattoo. The three crosses represent Jesus and the two thieves that were crucified on the hill top, with everybody watching. Although this is true, the three crosses can represent much more than that. Some people get these three crosses to show their faith in their religion, one cross being the father, the other being the son, and the third being the holy ghost. These crosses are left blank, meaning they are indeed just the crosses, nobody upon them if you have lost a loved one at some point in your life, maybe even a couple of people that you were close with, the three crosses are great ways of remembering and paying tribute to the fallen individual. Each cross could represent the one who has passed on, maybe with their names above each cross. Down below are examples of how others have gotten this three-cross tattoo, and ways you can even come up with your own creative take on it.

The typical three cross tattoo always starts out with three crosses designed in whichever way the tattoo connoisseur decides on. These crosses are usually bold and slender, some sitting upon a simple hill, and some just as the crosses by themselves. Whichever way you decide on getting this image, a bible verse is a nice quick add on if you want to give your tattoo more meaning. An inspirational quote from the bible is easy to find and when written by your three crosses, it gives the viewer something to not only read, but something for you to think about and remind yourself of every day to live a more righteous life. Simply putting for example, Isaiah 53, is a way to display this with your three crosses. Whatever your favorite bible verse is, this is a simple add on that will give your tattoo more depth. Tattoos such as this are normally placed in a spot where others can see, to spread the message of the Lord. the forearms are great places, as long as the upper arm. Some even get them on their necks and backs.

Since the three cross tattoo is a simple graphic, because a cross itself is a basic design, some people depending on how much money or how skilled their tattoo artist is, will get some background imagery to have displayed behind the three crosses themselves. This imagery can be something peaceful, such as the three crosses sitting upon the hills, with the display of the sunset going down behind the mountains. Color could also be added to this piece to give a more scenic effect. A background is a nice touch to this tattoo, you could even write down your favorite bible verse to go along with it. Yet again, when adding details to the tattoo such as these, it is a good idea to pick a spot on your body where you will be able to have enough room to fit everything in.

With all this in mind, the three cross tattoo is always a respectable way to pay tribute to loved ones that you were close to who may have passed, it is also a sure way of showing your faith to your religion. Most tattoo artists are aware of this type of tattoo and if you end up having any questions concerning the placement, the artist will help you sketch out an idea of how your tattoo will look and the scale as which it should be placed. 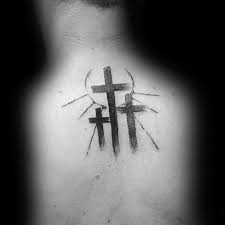 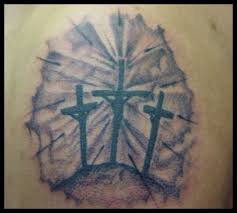 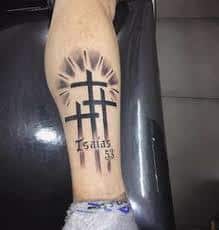 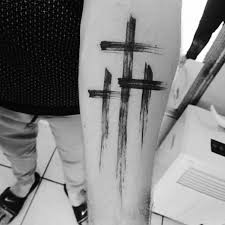 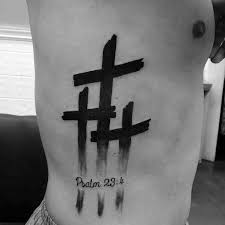 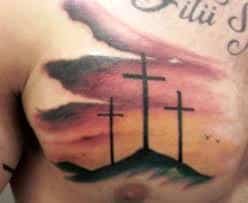 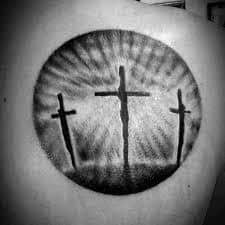 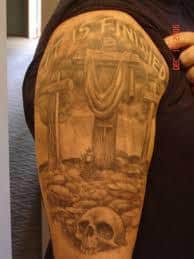 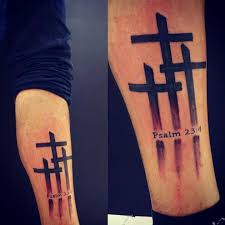 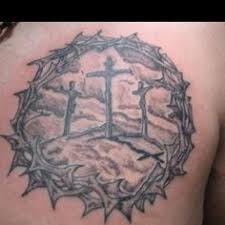 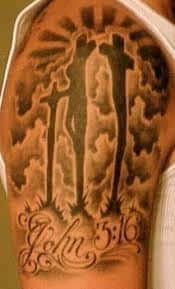 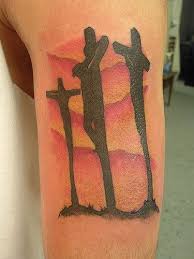 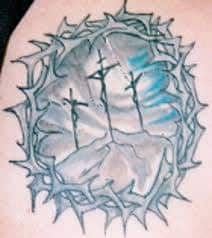 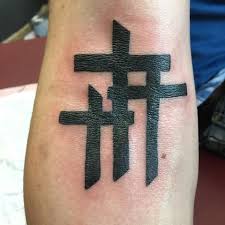 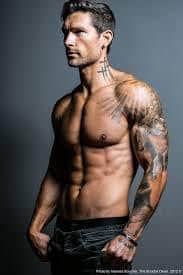 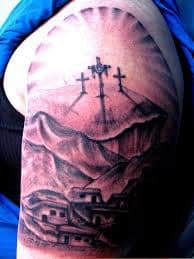 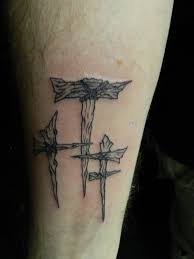 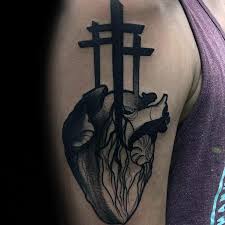 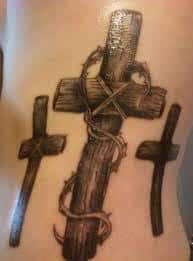 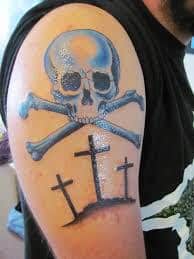 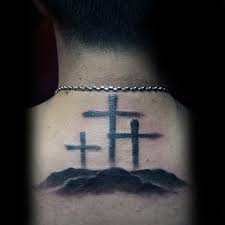