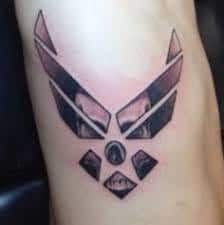 If you are a lover of tattoos but are also serious about defending our country and you are in a branch of the military or you would like to join one of Americas great armed forces, you are in luck!

In recent years, the military has decided to be more lenient with recruits having and getting tattoos. The Marines do not allow full arm sleeves that could be shown while wearing their short-sleeved PT uniforms.

The Army on the other hand allows tattoos wherever they would like as long as they don’t have tattoos on their neck, face, or hands. The Navy has always been known to have sailors that sport tattoos, and much of the American tattoo culture derives from this.

The Navy is by far the most lenient with tattoos allowing the sailors to recently have tattoos on their necks, full arm sleeves, and even behind the ears.

As of 2017 however, they are now allowing the recruits to have full sleeve tattoos as a way to open the gate to others who are passionate about defending the country. As long as the tattoos on an individuals body does not represent gang status, or racial and derogative symbols or words, you should be good to enlist!

The Air Force as of February 1st, 2017 changed its tattoo policy. This new policy states that an individual is allowed to have full sleeve tattoos, chest, back, legs, and will not be restricted to size. Tattoos on the face, neck, or scalp are still not allowed. Branding and other body markings such as piercings on the tongue and anywhere else are also still prohibited. The tattoos on the arms must stop at the wrist, no hand tattoos. You are now allowed to have one finger out of all 10 of your fingers, inked up, more than one finger is not allowed.

With all of this said, now is the time for you to start thinking up a sketch for your new Air Force piece! Depending on if you are in the Air Force or not, it would be a wise decision not to jump the boat and get an Air Force tat before you are even accepted. There are many different designs and variations, symbols and badges dedicated to the aviation branch of the military.

The Air Force controls what goes on in the air and are always ready to take action in the sky, for they are the ones who dominate the airways. A popular tattoo amongst members of the Air Force is the nations mascot, flying high with wings at full spread, the bald eagle draped in the American flag with the classic Air Force pendant usually seen on the uniforms, being held up by the talons of the eagle right underneath. This tattoo looks great on the chest and mid to upper arm.

‘Freedom is not free’ is a popular saying in the military world. It expresses that the freedom we have in America did not come overnight. We had to fight for our freedom and continue to do every day. This quote is another tattoo that is seen written upon the body, usually next to an image regarding the Air Force.

Maybe you have been to war or have seen combat and live for the fight! Perhaps you fly a fighter jet in the Air Force and you want your favorite plane soaring through cloudy skies firing off bullets. Realistic and cartoony versions of this tattoo have both been executed. Depending on your style and how you have the image in your mind set up, talking it over with your tattoo artist if you can not draw a graphic up yourself, is the next best step after deciding what you want done. For the more realistic graphic of the fighter jet in action, this tattoo is usually done with just black ink. Cartoony versions of this fighter jet chomping through the air spitting out bullets as if it were a living, flying creature are normally done with bright and loud colors.

Getting an Air Force tattoo however does not mean you have to be in the military branch. Some people who are related to or married to loved ones in this division of armed forces have also been seen with Air Force tattoos. Since the Air Force like every branch of the military puts its soldiers at high risk of death, accidents during combat or just by mistake happen. If a loved one has passed, and you want something to remember them by, a tattoo of a heart with the Air Force symbol within it, the birth and death date of the individual is a simple and genuine tattoo that sends a message of not forgetting our fallen soldiers.

The Air Force like every branch of the military has its own badges. These badges signify special skills, qualifications, and served as a form of identification of ranking. Getting a tattoo of a particular badge you are proud of receiving not only shows your accomplishments outside the uniform but is a solid reminder to yourself who you are and what you have done. Aviation badges for example have many different designs but the primary similarities in all of them are the two wings spread open with a symbol of the skill or occupation in the middle. The navigator symbol for the Air Force badge is a compass embodied by the wings.

Showing your patriotism is always a proud way of standing for your country. If you are going to get ink in honor of your years in service or the many years you have ahead of you, take these few tips into consideration before you go under the needle!