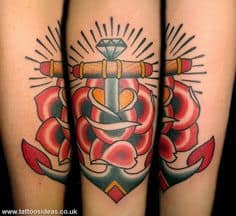 The anchor tattoo has been around longer than most designs, but that doesn’t mean it isn’t a cool tattoo to get right now. The reason why this design continues to be so popular is because there are so many great anchor tattoo meanings out there and a whole bunch of great designs to choose from.

While the anchor is usually associated with those who work at sea, it has been around for a very long time and has been used for a variety of reasons. Some people have gotten the anchor because they have family members who are on the sea, while others simply love the overall symbolism of the anchor. Regardless of why someone gets an anchor tattoo, it is usually extremely meaningful to them and they are proud to have this tattoo.

Initially used during the early days of Christianity, the anchor was used to disguise one’s religious beliefs to prevent them from being persecuted. It is said that the anchor also represented Jesus’ connection with the sea as many of his disciples were fishermen. People still get anchor tattoos for this reason, though they will usually add in a few more designs if they are using it as part of a religious tattoo. In fact, those who are creative can easily turn their anchor into a cross simply by manipulating the anchor just a little bit.

Some scholars believe that the anchor symbolized the feminine and masculine; the bottom half of the anchor representing the female and the rod representing the male counterpart. This was a popular belief in Egypt where the anchor is similar to the Anhk, which is the Egyptian symbol for life. Those who want to get a tattoo to represent quality might love this anchor tattoo meaning. It’s not necessarily a meaning that will be clear to everyone, though, so more design elements might be necessary to make the meaning clearer.

In the 1500s the British Navy adopted the anchor after a victory over the Spanish naval fleet. Anchor tattoos were used in the early 1900s to identity generations of servicemen within a family; it was not uncommon to see a grandfather, father and son all equipped with an anchor tattoo. This is actually still the case as many people will get an anchor tattoo if one of their parents or siblings have one.

Because an anchor is what secures a ship to the sea floor, it has been used to symbolize strength and stability. Those who pride themselves on being good family men or women can find a lot of great meaning in the anchor tattoo. It shows that they are proud to have settled down with the family that they have and are content in their lives. It also shows that they have accepted the role of being the one to take care of their families when times are good and bad.

The anchor tattoo can also represent loyalty, honor, hope, protection, salvation and enlightenment; all of which are the ideal characteristics of a noble serviceman. This is why the anchor tattoo is one of the most popular military tattoos in the world. Most people will see the anchor and recognize right away that the owner is in the service and that the tat represents all that they love of being in the military.

As with any symbol used for tattoos there are several different variations one can incorporate into a design:

USN anchor: The USN or US Navy anchor is popular among servicemen and women. It represents their loyalty and devotion to the US Navy. They typically will include the letters U.S.N or the red, white and blue of the American flag. Many of these anchor tattoos look similar to others, but it is not uncommon for a member of the Navy to incorporate other images into the tat, such as additional text.

Fouled anchor: a “fouled” anchor is one that is wrapped with a chain or rope. At sea these types of anchors are highly unstable and not ideal. However, many navies worldwide have adopted this symbol. The reason why many people like to get the fouled anchor is because it represents hope in troubled times. Obviously this is a powerful meaning to people both inside and outside of the military, and it is one of the more popular anchor tattoo meanings around.

US Marine Corps anchor: This design features an anchor globe and eagle and is the official insignia of the US Marine Corps. Occasionally one may opt to include a banner with the words “Semper Fidelis” which translates to “Always Faithful”. There are a lot of great Marine Corps tattoos out there, but the anchor has long been near the top of the list because of the classic image and the fact that the owners want to be recognized for their branch of the military.

Celtic anchor: this design symbolizes loyalty and a link to Irish culture. It’s actually quite popular in the United States and in other countries where Celtic people have immigrated over the centuries. If you want to make the “Celtic pride” meaning a little clearer, you might want to add a flag to the tattoo or colorize the anchor in a way that allows people to see that it is a Celtic tattoo.

Anchors have also been drawn with roses or hearts to symbolize love, honor and loyalty. Another popular choice is to include a pinup girl in the design as well. The truth is that the anchor tattoo allows for a lot of creativity since there are a lot of complementary images that just work with the shape of the anchor. It’s also the type of tat that people like to dress up a bit to make sure the meaning comes through.

One of the many reasons why the anchor tattoo continues to be so popular throughout the world is because there are so many designs to choose from. The anchor can be by itself, in the sea, surrounded by other images, or created in a whole new way. It’s a good idea to work with a great artist to come up with a design that both stands out and holds all of the meanings that you want to use.

The anchor is one of those rare images that looks just as good in black and gray ink as it does in color. Some people like to add in a little bit of green to their anchor tattoos to show the anchor’s age. Other people like to make their anchors look as realistic as possible so they will colorize both the anchor and the rope to make the tattoo really jump off of the skin. You can even make a cartoon-looking anchor if that’s the look you want to go for.

The anchor is also the type of tattoo design that you can place anywhere on your body. It’s an extremely popular forearm tattoo, but it can be blown up into a nice, huge back tattoo, or it can be a smaller hand or foot tattoo. The anchor does not gain or lose any meaning no matter how big or small it is on someone’s body. Of course, it should be a slightly larger tattoo if you want to add in more images around it.

If you do plan on getting an anchor tattoo, be sure to think about any of the meanings you want to use so you can possibly add in a few more designs to compliment those meanings. For example, if you get the anchor tattoo to represent your love of the sea, then you might want to incorporate other sea images such as boats and lighthouses.

On the overall, the anchor tattoo is a fantastic tattoo design for most people since it has so many excellent meanings. If at least one of the anchor tattoo meanings listed on this page work for you, then you can be sure that this is one of those designs that you will be proud of for as long as it’s on your skin.