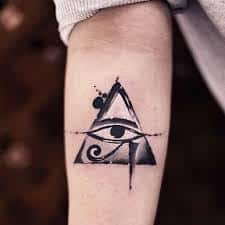 Every civilization and culture has a history behind it. During those times, people used symbols to represents factions of people, religions and ideas. The cool thing about these symbols are the stories behind them. Ancient symbol tattoos are great because of the meaning behind and the unique designs. One thing is for sure, after you get one of these symbols tattooed on your body, people will be asking about them.

There are many symbols from all over the world that have made their way onto the skins of tattoo enthusiasts. However, many might not understand the history behind the tattoo they have. You might be thinking this doesn’t happen very often, but you might be surprised about the people that just grab random symbols and get them tattooed.

In this post we plan on informing you guys about what each of these ancient symbols mean historically. From Buddhist symbols to Ancient Egypt, these symbols hold a great deal of meaning. By the end of this post we hope you have a better understanding about the symbolism behind these tattoos.

One thing to keep in mind when going through this list is that there are so many ancient symbols that we would be here all day if we were to list them all. We just wanted to a talk about a few of the more popular ancient symbol tattoos.

Before we get into the details, check out some of these ancient symbol tattoos.

Runes originated out of Norse insignias and are said to have magical and mysterious powers. In Old English, the world ‘rune’ actually describes something as being “secret” or “hidden”. In fact, these symbols were an ancient way to write and were often inscribed on things like enchanted artifacts and talismans of protection.

We find the earliest inscriptions that resembled runes were around 150 AD. Because the cultures that used to use runes underwent Christianization, the runic characters that were once used were usually replaced by the Latin alphabet. However, that doesn’t stop fans of history from getting the runes tattooed on their bodies.

The Unalome represents one’s path to enlightenment. This is a very old Buddhist symbol that is representative of the way most of us hope to live life. The winding parts of the Unalome represent our struggle in life. We are always looking to strive forward and try to be better people, but the path might not be an easy one. Eventually you get to the part of the Unalome that is straight, and this represents reaching an enlightened point in your life. Everyone must struggle to get to where they want to be or who they want to be. The Unalome is representative of that journey and is one of the most popular ancient symbol tattoos we see.

The Ankh tattoo is also another popular ancient symbol tattoo that you will see around if you are looking. It is one of the most well known Egyptian symbol and is known as the cross of life or the key of life. This symbol dates back to as early as 3150 – 2613 BCE which is known as the Early Dynastic Period. When identifying this ancient symbol, the Ankh looks like a cross with a loop at the top.

The Ankh tattoo was also adopted by Christian Egyptians and took the symbol to represent Christ’s promise for everlasting life.

The Eye of Horus tattoo has long been one of the more significant ancient symbols in Egyptian lore. The meaning of this tattoo can be complex because it is a mix of other ancient symbols. It is representative of the Horus, the Egyptian sun god.

There are three main parts of this ancient symbol to focus on. One is the eye, next comes the spiral coming down from the bottom of the eye and then you have the tear drop. When you see someone with this tattoo, they are trying to invoke royal power, good health and protection. It is actually very similar to the Eye of Ra. Ra is a different god, but the symbol represents the same traits.

The triquetra looks like three leaf like shapes put together to form a triangular symbol. It is also known as the trinity knot and is used in many cultures. The triquetra has roots in Celtic art, Japanese art and Germanic paganism. However, most will link this symbol to Christianity.

In Christianity, the triquetra symbolizes the Holy Trinity. The Holy trinity is defined as the Father, Son and the Holy Spirit. The symbol still has much of it’s roots in Celtic lore but was never really a stand-alone symbol. As more modern designers used it as such, the symbol became known extensively for Christianity.

The Vegvisir is an Icelandic ancient symbol that means, “shows the way”. The Vegvisir can only be explained in one modern collection of spells from Iceland called the Huld manuscript. The only thing said about the Vegvisir in this doctrine is that if this sign is carried, you will never lose your way in bad weather or a storm even when the way isn’t known. The Vegvisir has been called a Viking symbol in the past but there is no proof that it originated in these times. However, it seems to make sense as a good luck charm when sailing the seas.

People with Norse backgrounds tend to find this ancient symbol tattoo a fun one to get and it looks crazy. One thing is for sure about the Vegvisir; people will be asking about it.

As we said at the beginning of this post, there are too many ancient symbols to count but these are some of the more notable ones. We suggest determining what symbol you are going to get tattooed and then look for an artist that has a portfolio with similar symbols in it. If you need help in finding an artist to make your vision come to life, please reach out and we would be happy to make a recommendation.