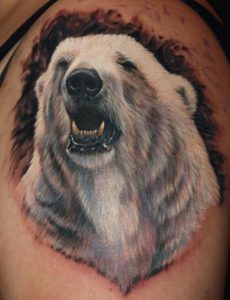 There isn’t just one animal tattoo meaning. That’s one of the many reasons why so many people decide to get a tattoo of their favorite animals. Animal tattoos as a whole are one of the most popular tattoo designs in the world since they can hold many different meanings and because they look good on the skin. Keep reading to see some of the most common reasons for people getting animal tattoos.

The first and most obvious reason that people get animal tattoos simply because they like that animal. There might not be any deep meaning behind the tattoo, but they have always liked that species and want to get a cool tattoo design. This is the main reason why every tattoo parlor in the world will have a book full of animals to choose from.

Another common reason for getting an animal tattoo is because that animal happened to be the person’s pet or they worked with it (perhaps in a zoo). These are very personal tattoos and they are never the type that people regret getting. They hold a lot of meaning to the owners because they can forever be close to that particular animal.

Sometimes a characteristic of the animal in the tattoo means a lot to the owner. For example, someone might get a tattoo of a shark or a crab because they love being near the ocean. Someone might get a tiger tattoo to represent their strength or combat ability. The list goes on and on since just about every animal represents at least a couple of things, which means that people can come up with one or multiple meanings to give these tattoos.

Symbolism is yet another reason why people get animal tattoos. There are plenty of animals that have been worshiped for centuries, and those meanings have been passed down through the generations. Some people believe that an animal tattoo that they get will give them those animals’ traits, which will help them in their lives.

An example of this symbolism is the bear tattoo, which is not only known to represent strength, but also bravery. What’s really cool about the bear tattoo and most other animal tattoos is that you can get them designed in a way that makes the meanings clear. For example, you could get a bear tattoo holding or picking something up to show that it represents strength. Of course, if someone sees a bear on your skin they will probably be able to guess what the meaning is.

The animal tattoo meanings attached to the tiger include strength, passion, energy and speed. This is a fantastic collection of meanings, but you only really have to use one. In fact, it’s most common for someone to pick an animal that they already love and then find one meaning that really works for them. If you happen to be a fan of tigers and are also a very passionate person, then this might just be the best animal tattoo and animal tattoo meaning for you.

If you get a lion tattoo, you might use one of many different meanings, including royalty, wisdom, and power. The lion tattoo is one of the most popular animal tats in the world because it’s an animal that has an imposing look and it holds meanings that just about anyone can use. As with the bear tattoo, ideally you will choose to get a lion tat designed in a way that shows which meanings you’re using.

Turtle tattoos are also quite popular right now because they look great in tattoo form and they are one of the top symbols of protection. The designs go from cartoony tattoos to just showing the turtle’s shell. Because of its circular shape, the turtle tattoo is one of the better animal tattoos to get if you want to fit something on your wrist, your shoulder, or some other rounded area of your body.

The wolf is yet another creature with excellent tattoo meanings. Most people get their wolf tattoos to represent loyalty, but they can also symbolize protection and destruction. If you value loyalty above all else and you happen to love the look of the wolf, then this is definitely an animal tattoo (and meaning) you should think about getting. Obviously you can also use any of the other meanings mentioned above (and there are many more), but you will find that most people recognize the “loyalty” meaning more often than anything else.

If you have any interest in birds and are trying to get very specific with your animal tattoo meanings, you should definitely look into getting a bird tattoo. There are hundreds of bird species out there and, believe it or not, people have come up with animal tattoo meanings for just about all of them! If you have a very rare or specific trait you want to have represented in tattoo form, chances are you will find a bird that carries that meaning. Ideally you’ll find a bird that both holds a special meaning to you and that you think is attractive.

Those looking to get a patriotic tattoo will often see the eagle as one of the best animal tats for them since it is the national bird of the United States. The eagle can look great on its own, but you will see that most eagle tattoos are combined with other patriotic symbols. A very popular version is the eagle flying above the American flag. Of course, you can get these birds designed any way that you want them.

Sometimes a particular animal tattoo just fits on a body part really well. The person might not feel a deep connection to that animal, but they think the tattoo will look fantastic. Obviously this isn’t the best reason to get an animal tattoo, but it’s one of those rare tattoo designs that you can get away with even if it doesn’t hold a very deep meaning to you. Sometimes a tattoo just looks good and people have to respect others’ decisions.

Those are just some of the most common animal tattoo meanings, but there are plenty more. Sometimes a person will love an animal species so much that they will have dozens of reasons for getting their animal tattoo. Some people will get them because that particular animal is the one they fear the most, so they get it to represent facing their fears. The list goes on and on.

What’s great about animal tattoos is that you can get them in just about any size and place them in any location and you will be able to use any of the meanings attached to those animals. That might not seem like a huge deal, but the fact is that you really can’t do that with the vast majority of tattoos out there. An animal tattoo can be small enough to fit on your finger (if you get a silhouette or just the face) or it can be large enough to spread all the way across your back.

Because there are so many ways that you can get animal tattoos designed and so many animal tattoo meanings to sift through, it can be a bit of a challenge for some people to choose the perfect one. You could just pick one that you like out of a book, but chances are you will end up seeing something later that you wished you had gotten. Most people want unique animal tattoos that hold deep meanings for them, and in those cases a lot of work has to be done to get the choice right.

Ideally you will spend some time finding the perfect animal tattoo meanings to use before you even start working on a design. Once you have meanings in mind, then you can think about how the animal should look on your skin. We recommend having an artist draw up three or more designs and then you can pick the one that you will love looking at for the rest of your life. Yes, it takes some time to get the perfect design, but that extra work will usually result in you being extremely happy with the final result.

Regardless of how detailed or simple your animal tattoo design is, you should definitely have a good tattoo artist do the work for you. They will understand the animal tattoo meanings that you want to use and will make sure that the image pops in the best of ways. These days it’s pretty easy to find a good local tattoo artist: search online and see what others have to say about all of the artists in your area.

As you can see, there are plenty of great animal tattoo meanings out there and even more ways that you can get these tattoos designed. Animal tattoos have always been and will continue to be some of the most popular tats out there. If you have an animal in mind and you find that it represents something important to you, then definitely consider getting an animal tattoo inked on your skin.