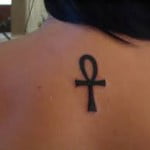 The Ankh tattoo is one of the most popular Egyptian tattoos in the world for a variety of reasons. Not only does the symbol have a unique shape, there are also quite a few fantastic meanings attached to it, giving owners of these tats an attractive and significant symbol to represent who they are. Below you will find all of the information you will need on each Ankh tattoo meaning and some of the slightly different design options available to you.

An Egyptian symbol of love and life, the two are interconnected in an inseparable way with the Ankh, also known as the crux ansata in Latin. Obviously these are two Ankh tattoo meanings that can work for just about anyone, which it why it is the Egyptian design that so many people choose. In fact, even if you were just looking for a tattoo to represent love, chances are this could be a good one for you since you probably would also like the “life” meaning. It is absolutely perfect for anyone who “loves life.”

This cross-like sign is one of the most common in Egyptian iconography, pictured with all of the gods and goddesses of their religious tradition. This is important to realize because it can (and often is) included with other Egyptian tattoos. As we pointed out before, the love and life meanings work for most people, so it just makes sense to include this symbol even if it is not going to be the focal point of the tattoo you’re getting.

Additionally, the Ankh is a hieroglyph, therefore a part of their written language and an integral representation of life, as it literally translates to “life”. It’s actually quite interesting that this could be looked at as a text tattoo as much as a simple Egyptian symbol. The Ankh tattoo meaning comes through regardless of how it is perceived.

Also a symbol of love and fertility, the Ankh is associated closely with the knot of Isis, another commonly seen cross-like symbol. Isis is a strong maternal figure, often depicted nursing one of her sons and the first goddess born from the earth. You can also blend these two symbols into a single design, making use of the Ankh tattoo meaning as well as the knot of Isis meaning. People who can do this are those who want to get symbols that represent life, love, and fertility.

The Ankh tattoo is a representation of the life cycle and all that life encompasses good and bad. This meaning is fantastic for anyone who wants to show that they understand that they will accept all that is thrown at them throughout their lives and, hopefully, keep their heads high. In a way this Ankh tattoo meaning is for those who have learned to deal with life’s hardships and are learning to get past those things so they can invite more good into their lives. The appreciation and gratitude for both aspects of life creates a sense of balance that leads to a well-centered soul.

The Ankh has become prevalent in many cultures and belief systems following the Greek take-over of Egypt in the 3rd century BCE. This is one of the main reasons why the Ankh tattoo is used by people all over the world rather than just in Egypt. Unlike other cultural tattoos, there’s no reason to explain to people from Egypt why you have an Ankh tattoo (or use its meanings) since most people recognize it as a universally used symbol rather than one that should only be used in one culture.

Because of its broad and inclusive meaning, the Ankh has been easily integrated into a ubiquitous symbol of life. Some people will include it in larger designs that represent life, while others will get the symbol by itself since they feel that it has a strong enough meaning on its own. This will come down to the size of the tattoo that people want to get and whether or not they want to add in even more meanings to their designs.

The Ankh tattoo represents longevity and all of the things that are commonly desired in life; love, peace, prosperity. You could look at it as one of the best tattoos to get if you want to get a lot of powerful meanings in a single symbol. Also, obviously, if love, peace, and/or prosperity are important to you, then the Ankh tattoo could be exactly what you were looking for. As we pointed out earlier, you do not have to use all of the meanings attached to the Ankh tattoo if some don’t make sense for you.

Not only life on earth, the Ankh represents the after world as well, a lasting life that the Egyptians spent a lot of their time preparing for. In this way you could see the Ankh tattoo as a spiritual design, and an interesting one at that. If you feel that good things lie ahead for you if you work hard to be a good person while you’re alive, the Ankh tattoo could be the perfect design for you so you can share that with the world. In this way you could also use it as a motivational tool.

Life becomes much more than just what is seen every day, the Ankh is a symbol of the life of the earth, celestial bodies, and the after world. If you get the Ankh tattoo chances are you want people to know that you see beyond the everyday trials and tribulations that life brings because you know that there are more important and meaningful things.

The world of the gods and goddesses is also conveyed with the Ankh as they rule over all of the realms of life. This is why you will see that many people include classic Egyptian gods in their Ankh tattoo designs. What’s great about doing this is that you not only get the Ankh tattoo meanings, you also get to add in all of the meanings attached to the gods themselves. Just be warned that these types of Egyptian tattoos can get quite pricey since most people want their gods to be as detailed as possible.

If you like the look of the symbol and any of the Ankh tattoo meanings that come along with it, then you will need to come up with a design that works for you. You should be patient during this process since you want to be sure that it looks exactly as you want it to and it fits wherever you want to place it. It’s a bit easier if you’re just getting a small Ankh tattoo symbol, but even then you should take your time and be sure that the design is perfect. A good tattoo artist will walk you through your options and will ensure that you are happy with the final product.

The size of your Ankh tattoo will not alter the meaning of your design too much, so that will come down to personal taste and any other ink you have on your body. You can get a large Ankh tattoo going down the middle of your back, or you might opt to get a smaller design on your wrist. Just be sure to factor in any other symbols or images that you’re including before you settle on the placement of your Ankh tattoo.

As you can see, there are some fantastic Ankh tattoo meanings to choose from and you also get to have a cool symbol to ink on your body. This is one of those tattoos that men and women rarely regret getting since the meanings work for people of all ages and encompasses things that we all care about. Just be sure that you take your time during the design process and find a good tattoo artist in your area to do the work.