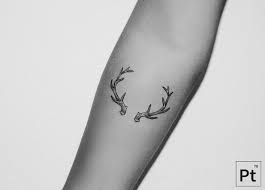 For outdoors lovers, there are a lot of symbols that have meaning. From trees to animals, there are thousands of symbols that represent the outdoors and other characteristics connected to nature. Because of this, if you are looking for a symbol for you, it is better to know what you really like about the outdoors. Do you love birdwatching? Are you a fisherman? Do you like to grow and plant flowers or do you like to hunt? There are a lot of directions you can go in when trying to determine what symbol fits you best. However, once you find it you can do a few things with it. You might be able to find some jewelry but if this symbol means a lot to you, maybe you want to get the image tattooed.

For hunters and others that believe in the symbolism attached, the antlers tattoo is a great choice. There is more to the meaning of the antlers tattoo than just liking animals that have them. But to understand the antler tattoo, we need to know about where they come from. Elk, deer and moose are a few examples of animals with antlers. However, most people associate antlers with deer and we will talk a little about that.

The purpose of this post is to talk about antlers and what they are and where they come from. We will also talk about why they seem to be so popular for tattoos and what is the antler tattoo meaning. There are also different variations of the antler tattoo, so we will talk about a few examples of this tattoo and if the meaning changes based on what images are tattooed with it. By the end of the post you should be more informed on this subject.

Antlers are found on the skull of the animal and are an extension of the skull. You find these on members of deer family. Antlers are made of actual bone and are usually only found on the male species. Each year, the animal with the antlers will shed their rack and regrow them. The primary purpose of antlers is to use as weapons when fighting and to attract mates.

Because antlers are on members of the deer family, we should talk about the deer and their symbolism as sometimes, these antler tattoos have deer in them. Since back in the days of hieroglyphics, deer with antlers have been scribbled onto cave walls and other materials. Back when these were being painted on walls, the deer with antlers was closely tied to male sexuality. Later on, the Romans started using this symbol and it was more closely tied to Artemis, the goddess of hunting.

Outside of the obvious meaning, the deer tattoo can symbolize fertility, purity, piety, power and strength.

The meaning of the antler tattoo can be different depending on who has it, but we will talk about some of the more common meanings to this tattoo.

If you look at a large rack, or set of antlers, they can make you get a little nervous. They are big, hard and can kill you if a deer chooses to run them into you. This creature has few natural predators and few that can withstand a blow from his antlers.

The deer antler tattoo can symbolize a unique grace, someone at peace with themselves, has a lot of love to give and a symbol of beauty. You will find this tattoo on men and women because they also represent swiftness, fertility, regrowth and humility.

One antler tattoo meaning that we wanted to talk about a little more is the idea of rebirth or regrowth. Because antlers are shed every year and the deer grows them back, this tattoo can represent the idea of rebirth. We get a chance to start again or maybe we turned a new leaf. The antler tattoo can be a way of symbolizing your new lease on life without actually spelling it out.

In another way, the deer has the ability to forage for food and find the green parts of life. This also leads to another antler meaning which symbolizes positivity, abundance, spirituality, creativity and watchfulness.

Finally, the tattoo of the antler might represent your love for the outdoors or hunting. I’ve got friends that simply love walking around the woods looking for antlers or shed hunting. This image tattooed could simply stand for their love of nature and hunting.

The antler tattoo with the fishing hook is often tattooed in the shape of a heart. This tattoo represents the persons love for sport. Whether it’s hunting or fishing, this person is someone that enjoys the process of hunting and eating the animals they kill.

Antlers with flowers tattooed are more closely related to the fertility and regrowth symbolism we’ve been talking about. Just like flowers in season, they grow when the time is right, and they wither during the winter. Antlers are shed and then they regrow and symbolize our regrowth as human beings.

But we understand that people get the antler tattoos for other reasons. We just wanted to share some that we’ve seen and also share the images below. The important thing to remember before you get your antler tattoo is to make sure you happy with your artist and if you need help finding one, reach out to the team at Tattoo SEO.