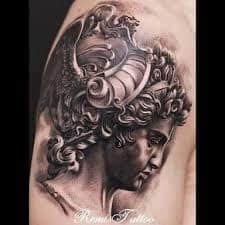 Greek mythology has long been a part of American Language Arts classes, so you have probably heard about quite a few of the Greek Gods. When all things are considered, the imagery from Greek culture makes some beautiful artwork. Even though few practice the traditions of the Greek mythologies, the stories of these have lasted for ages and we will remember them. These stories of Greek Gods with magical powers were almost considered real life super heroes. One of these Gods is a symbol of feminine power and her name is Aphrodite.

The Aphrodite tattoo might not be one you see a great deal. You have to consider you have Greek Gods like Zeus, Hera, Poseidon, Ares and Hermes to name a few. However, if you pay attention to Greek mythology, Aphrodite is one of the most important goddesses of all. She is the Goddess of beauty, fertility and love. These are big deals when talking about traits that one might look for in themselves. However, we may not all be blessed with these traits so to get by, we might try to invoke the powers of Aphrodite with a tattoo of her.

In this post we will talk about Aphrodite and the story behind the legendary Greek goddess. We will discuss the meaning and symbolism behind the Aphrodite tattoo and talk about the different ways we have see her tattooed. We hope that by the time you are done reading this you will have a better understanding of who Aphrodite was and what her image represents for some people when tattooed on the body.

Aphrodite is the Goddess of beauty, love and fertility. It is said that Aphrodite was born from the foam created from the waters of Paphos within the island of Cyprus. Legend has it, Aphrodite ascended from the foam when Cronus threw his father Uranus’ genitals into the sea.

On the other hand, in Homer’s story, Iliad, Aphrodite was the daughter of Dione and Zeus. This isn’t surprising as there are always many stories about the origins of these Greek Gods.

When it comes to Aphrodite, many thought her sheer beauty would be the cause of all out war between the gods fighting for Aphrodite’s hand in marriage. However, Zeus made sure this wouldn’t happen by marrying her off to Hephaestus. Hephaestus wasn’t seen as a threat by Zeus because of his deformity and ugliness.

That being said, Aphrodite had many lovers and wasn’t faithful to Hephaestus. Gods and men alike were subjects of Aphrodite’s infidelity. This included the god Ares. On a side note, Hephaestus caught Ares laying with Aphrodite and caught them in a trap for everyone to look at and laugh at, but I digress.

Aphrodite was later Adonis’s surrogate mother and lover. By this happening, it led to a fight with Persephone. Zeus stated that Adonis was supposed to spend half the year with Persephone and half with Aphrodite.

The Aphrodite tattoo is a symbol of love, fertility and beauty. As well as these traits, Aphrodite was a sign of female strength. She was a goddess that knew her own beauty and used it to her advantage. You are more likely to find a woman with an Aphrodite tattoo. The woman with the Aphrodite tattoo might have this tattoo to help her have a child. She might also get this to aid her in falling in love.

Because Aphrodite was so beautiful, she almost started a war with the Gods. She understood her power. She was also the goddess of procreation and pleasure. Someone with the Aphrodite tattoo might be letting the world know they are a good lover and they see similarities with the Goddess of pleasure.

Finally, the Aphrodite tattoo is a symbol of femininity and strength in women. By donning the Aphrodite tattoo, you are letting the world know that you are a strong and proud woman. You won’t be shamed for being attractive or using what you have to your advantage in this world. Everyone else uses what they have to their advantage so why shouldn’t you.

The Aphrodite in water tattoo is a piece that describes what some think is Aphrodite’s origin. One story is that Aphrodite rose out of the foam from the waters of Paphos within the island of Cyprus. The tattoo might depict Aphrodite in the nude and potentially standing in a clam shell. This one of the more common images when it comes to the Aphrodite tattoo of her in water.