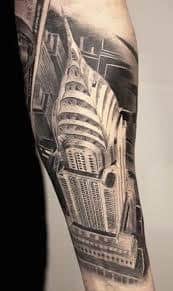 According to Dictionary.com, the definition of architecture is “the profession of designing buildings, open areas, communities and other artificial constructions and environments, usually with some regard to aesthetic effect.” Architecture can be considered the art of making beautiful buildings. Architecture is truly in the eyes of the beholder and the people making these buildings and bridges can stamp their legacy with one beautiful piece of work. Those that do this for a living have grandiose visions and want to put them into existence. They might even get an architecture tattoo to show their love of what they do.

Some might wonder what an architecture tattoo is. It is simply a tattoo of a building or bridge or really anything put together by someone who participates in architecture. In this post we are going to talk about the meaning of the architecture tattoo and what it means to the person with it. We hope that by the end of this post you will have new and fresh ideas of pieces of architecture that would be great ideas for a tattoo.

Architecture is both the product and the process of designing, planning and constructing buildings or almost any other structure. Works of architecture are considered works of art and cultural symbols. Ancient societies are often defined by the architecture achievements still standing.

De architectura is the oldest surviving written piece on architecture and it was written by the Roman architect Vitruvius. According to him, a good building should meet three philosophies of what is known in English as, firmness, commodity and delight. You might also break these three principles down to durability, beauty and utility.

An architect should try to fulfill these attributes as much as he or she can according to Vitruvius. A man named Leion Battista Alberti added to the ideas of Vitruvius. He wrote De Re Aedificatoria and in this piece he said beauty was basically a matter of proportion, however, ornament also played a role.

Someone with an architecture tattoo might pick a building or bridge that has significance in their lives. They might have met their loved one there or just thought it was beautifully made. Just like any tattoo, the meaning can be whatever you want it to be. We encourage that because an image doesn’t always have to represent a known trait or characteristic. We can make these things up as we go.

The Taj Mahal tattoo is one that represents the beautiful building in Agra, India. This building is well known and is many movies so it’s no surprise that it is a popular subject to be tattooed. The Taj Mahal took over 22,000 painters, laborers, stonecutters and embroidery artists to build. It took over 17 years to build and the final product ended up being an icon that we’ll never forget.

The Hagia Sophia building in Istanbul, Turkey is one of the most beautiful architectural structures in the world. Getting a Hagia Sophia tattoo is an architecture tattoo if we have ever seen one. The name means “holy wisdom” and was built as a cathedral in Constantinople back in 1935.

For this beautiful structure, two men named Isidore the Elder and Anthemius oversaw the process. Amazingly, the Hagia Sophia was build in less than six years. Because of the haste of building the Hagia Sophia, there were problems with the process like the domed roof almost collapsing during construction. However, it ended up working out and now sits the beauty.

The Guggenheim resides in New York City and is about as famous as they come as far as architecture goes. The Guggenheim tattoo is representative of “the world’s largest toy”. The building was designed by Frank Gehry who was an architect out of Los Angeles. They started the process to build the Guggenheim in 1991 and by 1997, it had opened its doors. The Guggenheim was named the most important piece of architecture since 1990 by 52 expert architects.

We have seen many other structures tattooed on the body of architecture fans as well. Some that stand out might be the Chateau de Chenonceau in Chenonceaux, France or the The Pyramids of Giza in Giza, Egypt. The Acropolis of Athens in Athens, Greece is also a famous structure that would be fitting as an architecture tattoo. We have also see a lot of Gateway Arch tattoos from people in the United States. This structure is in St. Louis Missouri.

There are many more architectural structures that would make great choices for tattoos. If you have something in mind you are thinking of getting, make sure the artist you are thinking about has experience in this kind of work. If you need a recommendation on where to go, let us know and we would be happy to help.