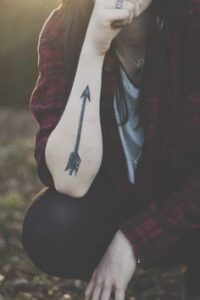 Arrows are everywhere we look in our lives. They control and designate the movement of machines, people and information. On the other hand, using the arrow as a representation is a generally drawn as a variation of an archery arrow in which there is fletching, a shaft and the sharp point. Over the course of time, arrows became overly abstracted and simplified to the point where the only part you could recognized of the original arrow the triangle shaped tip on the end. This touches the most simple traits of the arrow no matter the meaning or the application.

History of the Arrow

The earliest evidence of projectiles with stone tips, which might have been launched from a bow, was over 64,000 years ago. These tips were located in Sibudu Cave which is currently the location of South Africa. About 10,000 years ago there was evidence of bows being used to shoot these arrows and it was based on arrows made of pinewood that were found north of Hamburg, in Ahrensburg valley. At the base of the arrow you could find shallow grooves that told a story of being shot by a bow. The oldest bow ever discovered was said to by around 8,000 years old and found in Denmark in a place called Holmegard swamp. With the Arctic small tool tradition, it is said that archery came to America around 4,500 years back.

There are three parts to the arrow. These are the shaft, the arrowhead and the fletchings.

First is the shaft which is the main part of the arrow and the other components of the arrow are all attached to the arrow. Generally, the shaft of an arrow is made of lightweight, strong reeds, wood or bamboo. The arrows of today are primarily made from aluminum, carbon fiber reinforced plastic or other materials that might be combined to form a sturdy shaft.

When you feel the stiffness of the shaft of an arrow, that is considered the spine and refers to the strength of the shaft based on the amount of bend when you compress it. Therefore, a stronger shaft has more spine. If you want to make sure you are hitting your target in consistent grouping, you have to make sure all your arrows have the same amount of spine.

The GPI (grains per inch) rating of an arrow is a measurement of its weight. To get this number you multiply the length of the shaft by its GPI rating.

Sometimes the shaft is made of two pieces of wood that are put together. By doing this, you end up with what’s called footed arrows. These are considered to be some of the best arrows available and they were used by early Native Americans and Europeans. These arrows would usually have a small amount of hardwood at the part of the shaft closest to the arrowhead and the rest of the shaft is made of softwood.

Traditionally considered a Native American symbol, the arrow can hold a wide array of meanings. These meanings can also vary from tribe to tribe. Native Americans are known for using signs and symbols as a way to communicate their history, ideas and dreams. The arrow was a weapon in their culture, it was used to hunt and provide for their families as well as offer protection, and because of this it was a tool for sustaining life.

One of the biggest factors in altering the meaning is the way that the arrow is depicted or placed in the tattoo design. This is one of those tattoo designs that can mean quite a few different things, so you should know all of the meanings before you commit to a specific design. Let’s take a look at some of the most popular arrow tattoo meanings and design.

There are blunt tips in which are used more for stunning the target instead of penetrating the target. The tips may be made of metal or rubber to get the effect you want. You’ve got bodkin points which are rigid and shore with a smaller cross section. After researching the history, these tips were made of non-hardened tips that either were used because they were cost effective or because it made the arrow travel further. Either way, they weren’t penetrating armor like originally thought. Judo points have wires that spring from the side of the tip. These tips are used to keep from losing the arrow. Broadheads are used for killing prey. Generally made of steel, they will usually have two or four sharp blades that extend from center tip and cause a great deal of bleeding. Field tips are like tips used for target practice. It allows the user to miss the target and be able to pull the arrow out of whatever it might be stuck in. Target points have a conical point and are shaped like a bullet. These are used to penetrate the target without getting stuck or doing a lot of damage to the target. Finally, safety arrows are used like they sound; to be safe. People use these in reenactments of combat.

The last part of the arrow, but important, are the fletchings. You can find the fletching and the back of the arrow. They act as airfoils and allow for the arrow to stable and far more accurate during flight. The idea is to keep the arrow heading in one direction for the duration of the shot. Some cultures don’t use fletchings. These kind of arrows are called bare shaft and are used to help train the archer.

Below are some different variations of the arrow tattoo and the meaning behind them. Many times, even changing the direction of the arrow or adding multiple arrows can impact the symbolism of the tattoo. We understand there are probably a hundred more ways to get an arrow tattoo but these should give you some pretty good ideas of the direction you could go in when you get your own. Check out these examples and then check out the pictures below.

A solitary arrow represents defense and protection from harm. It can also be used as a symbol of movement or direction. If more than one person gets a single arrow tattoo, it is there to mean that their friendship is going to last a lifetime. Whichever meaning the owner decides to adopt, the solitary arrow can have an infinite amount of designs and can have one or multiple images around it.

Two arrows pointing away from each other commonly stand for war. It can mean that someone is battling something in their lives, or that they (and possibly their family) have a lifelong war with someone else. This happens to be one of the more aggressive of the arrow tattoo meanings, but it’s certainly not a rare one.

A broken arrow image is one that depicts peace or the burying of the hatchet. In some cases, the owner gets it to show that they are getting past something that was a big weight on their shoulders. When someone gets it to mean peace, they may be using the broken arrow as either a religious symbol or they simply want peace in their lives. This can be a very cool arrow tattoo design, so some people will get it just because of the way it looks and will add on meanings later.

Two arrows crossed is another symbol of friendship. If you see one person with this tattoo design, you can be pretty sure that someone else has the exact same tattoo, or at least something similar. The arrows can be simple designs, but owners usually want one to represent themselves and the other to represent their friend, partner, or sibling.

A bundle of five arrows typically designates strength, as a single arrow can be easily broken, but a bundle of arrows is tougher to break. This is yet another arrow tattoo design that multiple people will get to show that they have a strong bond.

Arrow Through a Diamond Tattoo

An arrow through a diamond symbol can represent courage as a person moves forward. This can either mean that someone has just gone through a hardship or they need a bit of help getting through the tough times ahead. This is one of many motivational arrow tattoos that people get these days, but it is gaining in popularity because there are plenty of ways to design it.

Arrow Pulled Back in Bow Tattoo

For anyone searching to depict a positive outlook on life, an arrow tattoo can be a great place to start. An arrow being pulled back on the bow can depict life dragging someone down, whereas the arrow being released propels them straight ahead into something new and positive. With that being said, an arrow can only shoot forward by being pulled back, so only by going through dark times can you push yourself to a better place.

An arrow shown with a bow can also symbolize the zodiac sign Sagittarius. Some people who get the arrow tattoo for this reason will be proud to let people know that they are laid back people who want to get the most out of life. In many cases, this tattoo design will include an archer or a Centaur with the bow and arrow.

The arrow is also thought to stand for love – as with Cupid’s bow and arrow, hunting, swiftness, power, flight, penetration and direction. A couple might get matching arrow tattoos to let the world know that they are together. Some people might get their own love arrow when they have a lot of love in their lives.

It can also be seen as a phallic symbol of masculinity. Obviously if a guy gets the arrow tattoo for this reason, they are proud of their manhood and don’t mind letting everyone know about it. This is definitely one of the rarer meanings for the arrow tattoo.

It should be obvious by now why the arrow tattoo is so popular. There are so many meanings that you can attach to it, so just about anyone could get one without any regrets.