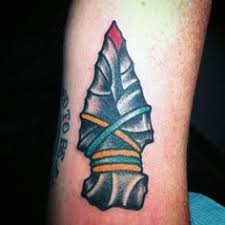 Weapons have been around since the dawn of mankind. One of the most primitive self defense and hunting devices which is still in use to this day, modified however, is the bow and arrow and the throwing spear. On the tip of each of these forms of weapons, there is a sharp tip fastened together at the end of the rod. This tip is called the arrowhead.

During the Stone Age, the people of the land would use material such as bones, rocks, flint, obsidian, and even chert to form into a sharp object that could be used to penetrate an animal or human very easily. Unlike an axe, arrowheads are attached to rods that are known as projectile weapons. Once the arrowhead is equipped, it is known as a projectile point. In order for the arrowhead to stick to the shaft of the weapon, they would be secured on in a couple of different ways.

One way would be to stick the arrowhead on the rod through a process called hafting. Hafting is done by making indentations in the arrowhead itself that will connect with the rod that is also indented in a particular way so that the arrowhead does not fall off but rather connects the two as if it were a jigsaw puzzle. Medieval Europeans would use hot glue, then to secure it they would use a material such as a thing rope to wrap around the piece, so it did not fall off when being thrown or projected into the air.

There are a plethora of different kinds of arrowheads. The classic triangular shape of the arrowhead is the most recognizable but does not mean you necessarily have to get that type of arrowhead as a tattoo. Down below are examples of arrowhead tattoos, the meaning and symbolism behind the ancient tool, and other helpful tips on placement to consider.

We see a lot of arrowheads being discovered through archeology along with many other inventive Native American artifacts that were used by the many tribes that crossed the continent. Because the Native Americans back then did not have the technology to create weapons such as firearms, they stuck to their roots and sculpted their own weapons with the use of bone fragments and other materials such as rocks.

These jagged, pointed triangular edges coming together to a sharp point was put on the tip of a rod and used to hunt down animals so they would have meat and fur to feed and protect their families from the cold. The Native Americans are so famous for using these arrowheads that many people have been inspired to get arrowhead tattoos with symbols relating to Native Americans around, or within the piece itself. If you are going in the route of having a Native American themed arrowhead, having a feather of a bird, such as an eagle, is a popular image to have accompany the arrowhead.

Showing the chiseled and rugged edges of the arrowhead is also an idea if you want the arrowhead to look more realistic. Having a tattoo of an arrowhead such as this can really show off your culture if you have any indian in you. If not, it is still a very cool way to represent qualities about yourself. The arrowhead for example is a symbol of alertness. The sharp tip represents your sharpness and ready for anything attitude. Since the Native Americans were master hunters, a tattoo of the arrowhead can also signify that you too are a hunter that provides for their family. It is also a way of saying you have great survival instincts and have a strong direction toward life. Having the image of feather to go along with your graphic also adds onto the tattoo and meaning. The image of a feather was a way of saying that whoever wore the feathers, normally a Chief of the tribe, had a way of communicating the spirit world. The feather was a way to express their wisdom of the Earth.

Before committing to getting an arrowhead tattoo, take a look at the different variations and styles of arrowheads to choose which one would best suit you. The classic arrowhead that was used by the Native Americans and indian tribes is one that is in a rectangular shape and comes to a sharp point. Although this is the most popular arrowhead because of its ancient past, there are other forms of arrowheads that throughout the years has been developed for different reasonings.

The bodkin style of arrowheads is one that is a bit different from the original forms of arrowheads. This is because this particular arrowhead is a lot more slim than other arrowheads. This design allowed the arrow or spear to fly longer in the air up to a higher speed. Because of its slick and slim body, the bodkin arrowhead has no problem cutting through the air.

The judo point style of arrowheads is completely different than any other arrowhead that you have ever seen. This design has spring wires that extend sideways, almost like barbs, this arrow is used for the sole purpose of the arrow not getting lost so easily in the wild. It is also a perfect tool to hunt small game animals with.

Broadhead arrowheads are one of the most effective and longest lasting designs. Since the Medieval times, the broadhead arrowhead was constructed to be as dangerous as possible, making the kill fast. There are two to four blades that extend from the base of the arrowhead. These blades are sharpened so that they can easily penetrate, and slice open the victim upon impact. The broadhead arrow is still used to this day by many hunters and archery enthusiasts because of its great credibility and effectiveness.

The great thing about getting a tattoo of an arrowhead is that it can virtually fit wherever you would like. This being said, this simple graphic can be as big or small as you want. For those that have a deep love for archery and hunting who like to stick to their roots, the classic stone arrowhead is a great choice. Depending on where on your body you would like to get this tattooed, making sure that everything is proportionate is the first step. If you are unsure about where you would like it, print out pictures of the particular design in different variations and sizes then compare those images to where on your body you think you should get it.