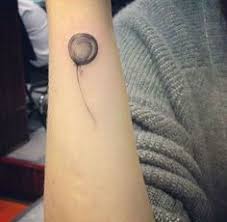 The balloon is the kind of image that symbolizes a lot of different ideas. Balloons have been used in all sorts of paintings and art installations all over the world for many years. Kids and adults both enjoy balloons in certain cases because we all loved balloons when we were kids. It is no surprise that something that has been around for so many years would be packed full of meaning and symbolism. To follow that up, something that has been around for so long would make sense in terms of being a subject for a tattoo.

The balloon tattoo is a great one for any occasion. The balloon tattoo you choose could be small enough to fit on a finger or large enough to cover your back. It is one of those images that isn’t greatly detailed but it has a great deal of meaning. Because it is such a popular choice in tattoos, many are curious as to what it represents and that is what we’ll dive into here.

The balloon tattoo can mean different things depending on the owner of the tattoo. However, there are some common themes amongst those that have this tattoo.

Balloons are known to symbolize the act of letting go or holding on. Generally, this has to do with emotions and feelings. When you lose a balloon in the wind, it can represent a bad feeling. You might get scared or have an empty or sinking feeling when you lose something you didn’t want to. However, holding on to something that wasn’t meant to stay with you is not healthy for they psyche and that is also a bad feeling that you get. Until you let go of these feelings and things you were meant to be with, you will never heal so in this case, the longer we hold on to something that isn’t ours will only hurt us. We only are able to grow and move on once we let go of the baggage and that can relate to anything in life including deaths, relationships or bad habits.

As human beings, we are flawed and we have the tendency to hold on to things we should. The past is one of those things. We hold on to bad feelings that we associate with experiences that we have had that will impact us in the future. In many cases, the balloon tattoo being released is a symbol of letting go of the past and stepping forward into the next chapter of your life. It might be an uncomfortable moment, but you will be stronger when you let go of these and a simple balloon tattoo can be the reminder you need to keep looking forward and to not dwell in the past.

Below are a few variations of the balloon tattoo and what these tattoos are known to represent. The balloon tattoo meaning can change depending on how the image is depicted so hopefully by seeing this, it will clear up some prior notions.

The heart balloon tattoo is a representation of love. It might also be represented in an image of someone letting go of a heart shaped balloon. This is symbolic of losing a loved one or letting go of the emotions attached to a prior relationship.

The famous Banksy art with the little girl letting go of the red balloon has been known to symbolize a few things. It might represent the loss of innocence of the little girl in the picture or the loss of innocence of all children in the world. It could also by symbolic of the loss of someone’s childhood due to circumstances beyond their control. Banksy never explained the meaning of this piece of art so we’ll leave that up to you.

History of the Balloon

However, we are going to stick with the rubber balloons and how they evolved over the years. Michael Faraday was the inventor of the first rubber balloon in 1824 and he was using them at the Royal Institution in London for research with hydrogen. He made these balloons by laying two pieces of rubber on top of each other and pressing the edges together. The rubber stuck together on its own and flour was put in the middle so that part wouldn’t stick. He said by filling it with hydrogen, he noticed how translucent the balloon would get when filled all the way and that it would rise with the hydrogen inside. However, this balloon wasn’t a toy.

The first toy balloons were invented by Thomas Hancock, which was a rubber manufacturer. They came out with it a year later and it was sent as a do-it-yourself kit with a rubber solution and a condensing syringe to use. J.G. Ingram of London was a manufacturer that created the vulcanized toy balloons that weren’t affected by temperature changes.