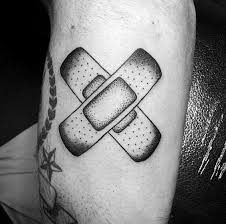 When we were kids, our mom or dad would put a bandage on a skinned knee to protect the wound from being infected. The bandage, over time, became known as the Band Aid as the branding worked for this company and now that is what we call all bandages. Band Aids were used to help us heal our wounds on the outside but what about what’s going on the inside. Sometimes these wounds aren’t as easily healed.

When you get a Band Aid tattoo, you can imagine what most of them look like. However, there are a lot of different ways you can get this tattoo and there are good reasons to get it. In this post we are going to talk about the meaning behind the Band Aid tattoo and what it means to the people that have it. People are using this tattoo as a way to express a feeling they haven’t been able to talk about in many cases. We will get more into that later, but we hope by the end of this post you have a better understanding of why someone gets this tattoo.

About the Band Aid

In short, Band-Aid is a brand name of Johnson & Johnson’s line of adhesive bandages. They have been around for around 90 years and have multiple Band Aid lines to pick from. These include Advanced Protection, Durable Protection, Basic Care and Active Lifestyles.

The Band Aid was created by Thomas Anderson and Earle Dickson (Johnson & Johnson employee) in 1920. It was developed because his wife kept burning herself in the kitchen while cooking and the prototype made it so Josephine could dress her wounds and move on with the day. Dickson then showed his employer and it took off from there.

Now we get into the reasons someone might get a tattoo of a Band Aid and much of it has to do with a wound of some sort. This might be a physical wound or an emotional wound, but the Band Aid tattoo represents a wound that is present or a wound that is healing.

Talking to people that have this tattoo, many of the ones with say they have it because they have an emotional wound that has not healed. The Band Aid tattoo represents this wound and by facing it every day, the wound becomes easier to deal with. As with most things, the way to get over them is to face them and when getting the Band Aid tattoo, you can remind yourself everyday that you are working on something whether it is self-inflicted or not.

The main idea with the Band Aid tattoo in this case is that it lets others know that you embarrassed by this scar and in fact, you are bringing it to the attention of others. You might even be using it start a conversation with someone dealing with similar issues that you may have had.

One of the more fun ways we have seen the Band Aid tattoo utilized is getting it because you are clumsy. We all know a lot of people that have a hard time just walking around without running into something or falling down. The Band Aid tattoo represents their daily journey without stubbing a toe or tripping over a crack in the sidewalk. They are just poking fun at themselves by doing this.

We talked about a few reasons why people might get the Band Aid tattoo and below are some of the variations we have seen of this tattoo. You might have seen other examples, but you can try to gather some inspiration from reading some of these.

As stated above, many people get the Band Aid tattoo to cover a scar. It is a fun way to let everyone know that you are aware of this scar and instead of getting a cover up tattoo, you are embracing it with a Band Aid tattoo over the area.

Motivational Band Aid tattoos have taken off lately. In most cases, these tattoos are only temporary, but they have positive messages on them for you to look down at throughout the day. This is a great way to keep a good attitude and keep moving forward. Now, some people choose to take it a step further and get the images actually tattooed onto their skin permanently.

This tattoo is just another way to remind yourself to stay positive and be happy.

I Forgive You Band Aid Tattoo

We see a lot of Band Aid tattoos that say “I forgive you” above it. This tattoo was created for self-healing. The person with this tattoo might have endured some physical or emotional abuse at some point in their life and a way for them to get over this issue is to let the person know they forgive them. This isn’t to say what they did was right or that you will forget about it but sometimes it takes a bit of forgiveness for a person to move on with their life. By holding on to the anger, you are giving the person that hurt you power even today.

Whatever reason you have for getting your Band Aid tattoo, we suggest making sure you do your research on a place to get it done. It may seem like a simple tattoo but someone that isn’t used to using fine lines might not be the one for this tattoo. If you need help finding an artist that will be perfect for you, let us know.