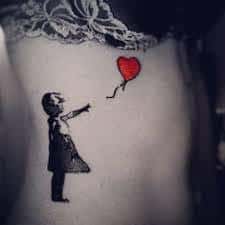 We don’t know a great deal about Banksy other than he was born in Bristol, England in 1974. Banksy is the alias the well-known street artist and after all these years, his identity still alludes us. There was also a documentary made of him called Exit Through the Gift Shop and it discusses the relationship between street art and commercial art.

The street style of artwork that Banksy is well known for make him and his art popular subjects when it comes to being tattooed. The mystery behind the artist also helps with this but in addition to just having a cool story, his artwork is inspiring.

We will talk about what we know of Banksy and discuss his famous pieces. We will discuss if there is any symbolism behind his art and what it means to the people getting his work tattooed on their skin. The Banksy tattoo has become a popular choice of late and we want to dig in a bit and talk about why this is the case for so many tattoo enthusiasts.

Banksy might be one of the most controversial street artists of all time. He has created an entire art subculture devoted to his life’s work. It’s no surprise that with a resume like this, his work would be popular in the tattoo industry. 20 years after the being involved in street art, his identity is still unknown. One of the reasons Banksy is so controversial is because of his art style. His work has images that are provocative and powerful, and they can be found all over the web.

He began his rise to being one of the most interesting figures of all time in the early 1990’s. Banksy was part of a Bristol graffiti gang called DryBreadZ Crew. Most of Banksy’s early work was free hand but he was also known to use stencils at times. He started predominantly using stencils in the late 90’s. His signature style developed as he started gaining notoriety around London and Bristol.

His work, often combined with slogans, were comprised of jarring images. They often engaged political debate an were themed in this way. Satires criticizing war, greed, capitalism and hypocrisy were often the subjects of his work. In these pieces, Banksy would involve members of the royal family, police, apes, children and rats to really stir up the masses. In addition to his skills as a street artist, Banksy was also known for installation art.

Some of his other works drew attention because of their bold themes and edginess. The West Bank barrier, between Palestine and Israel, was the location of some of Banksy’s work. He also has a gift for using copyrighted images and incorporating them into his art. One of the most well-known examples of this is based of Monet’s series of water lily paintings. Banksy adapted these pieces to make the water lilies look like floating debris and trash.

Because of his fame, his work went from being acts of vandalism to well-known and rare pieces that art enthusiast would like to get their hands on. He is even said to be one of the main reasons that street art went from being just graffiti to wall art. One journalist named Max Foster coined this “the Banksy effect”.

New York city was the next destination for Banksy and October of 2013, he showed up to the Big Apple. Banksy said that for each day he was in New York City, he would create a new piece of art. During the month Banksy was in New York City, he took in the sights and reacted to his surroundings. It was even said he was selling his work on the streets for around $60 a piece which was well below market value.

What we take from the Banksy tattoo meaning is a stand against corrupted politics and hypocrisy. These are the same values that Banksy tried to incorporate into his work and therefore, getting a Banksy tattoo would involve these same meanings.

Balloon Girl is one of Banksy’s most famous pieces and was created in 2002. The image is of a young girl letting go of a red, heart shaped balloon and reaching out for it as it leaves her hand. On the surface, this image is interesting as the only bright spot of the piece is the red balloon. However, if you look beneath the surface, you might see more. Could the Banksy Balloon Girl tattoo represent a loss of innocence? We think it could. It might also represent love lost or the loss of childhood. The meaning is in the eye of the person with this tattoo, but these are some meanings we have gathered from this famous image.

Banksy’s Fallen Angel artwork is another one of his pieces that is notorious. The image is of an angel sitting on the ground with a bottle of booze in front of him while smoking a cigarette. The Fallen Angel tattoo symbolizes the fall of something beautiful. This could be a person, a way of life or society. There are many strong meanings behind this piece and that is what makes the image so provocative. The Banksy Fallen Angel tattoo is a jarring one, but it also will spark conversation between viewers and the canvas.

This might be Banksy’s most well-known piece of all time. The image was created in Jerusalem and is an image of a rioter with a handkerchief covering his mouth and nose. With a hat on backwards, the man in the pictures is about to throw what looks like it could have been a harmful object but instead a bouquet of flowers in its place. The only color in this image is in the flowers which makes them stand out. The image might have been in response to the stabbing of three people during a gay pride parade in Jerusalem but there was much violence already happening in the area at the time. The image is to remind us of our peaceful ways.

The mystery of Banksy is a fun one to contemplate. His provocative art is constantly discussed and is the subject of many tattoos. We hope you have a better understanding of who Banksy is by reading this post. If you are thinking of getting a Banksy tattoo and aren’t sure where to go, let us know and we would be happy to help.