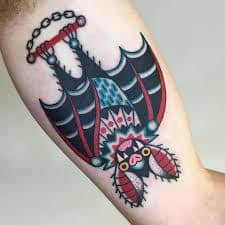 When talking about creatures of the night, many come to mind. However, when talking non-fiction animals who represent the night, the bat quickly comes to mind. Not only are they associated with things that go bump in the night, they are also associated with some of the popular fictional characters of all time. A couple that come to mind are Dracula and Batman, but we will go over the different variations later in this post.

The bat tattoo can represent a plethora of different traits and characters. It can also be tattooed in many different styles and those styles carry their own meaning. In this post, we will go over the meaning of the bat tattoo and different ways this tattoo has been depicted.

First of all, we should talk about the bat and some of the personality traits they hold. The bat is a mammal with limbs that are adapted to wings. In addition, they are the only mammal that can sustain flight and they are able to maneuver better than birds. The smallest bat in the world is Kitti’s hog-nosed bat and comes in at about 1.14 inches in length and a wingspan of 5.91 inches. The biggest bat is the giant golden-crowned flying fox which can weight up to 4 pounds and has a wingspan of almost 6 feet.

Bat tattoos can symbolize a lot of things depending on how they are depicted and where they are seen. Bats are attached to a lot of negative traits in these parts, but Native Americans had a different outlook on the bat and honored them.

One symbol that is a popular when discussing bats is communication. Because they are extremely social animals, they are known to represent family and nurture.

They are also a symbol of intuition in Native American culture. A spirit bat might be invoked to see the truth in situations because they are able to move through the night (essentially seeing) which is something we cannot do.

Bats are also a symbol of rebirth as they live in caves and emerge from the darkness every night for hunting.

We all know the association between bats and vampires (and specifically Count Dracula). However, you might wonder where the connection started. From what we know, it all started with the species of bat known as the vampire bat or “Desmodus rotundus”. It’s only found in parts of Central and South America and they mostly fee on livestock. Once the bat bites the livestock, it will lap up the blood.

This goes right into everything we’re terrified of. Animals biting us and then sucking our blood. This goes into vampires. These blood sucking monsters have been around since the ancient times in many cultures and more specifically in Europe.

Bram Stoker’s Dracula wasn’t the first connection of the bat with vampires, but it was the book in which the connection was cemented. When he was working on the book in the 1890’s, Stoker saw a newspaper clipping from a New York paper concerning vampire bats and it’s what prompted him to make the connection.

Dracula is what we all feared as kids and especially after seeing the movie or reading books about him. Anything that is out to suck our blood doesn’t seem like a good thing to be around and bats were no different. Everyone knows the common bat won’t turn into Dracula, but it doesn’t change the seed that has been planted and the association.

Batman is the DC superhero that has taken on the persona and look of a bat when he fights crime. The character was originally created by Bill Finger and Bob Kane and made his first appearance in Detective Comics #27. Even though his name is Batman, he has also been dubbed the Dark Knight and the Caped Crusader.

Bruce Wayne is that man behind the mask. He was a rich playboy and the owner of Wayne Enterprises. When he was a child, he witnessed the murder of both of his parents and ever since then, he swore he would find the perpetrator and bring them to justice.

This is the a little behind the character of Batman. The notoriety of this character has grown to epic proportions over the years behind comic series and a number of movies and TV shows. Batman has quite the following and this version of the bat tattoo could be a picture of the Batman or his logo which happens to look like a bat.

One last bat tattoo variation would be one that represents Bartok from the 1997 film Anastasia. Bartok is an albino bat with a sense of humor and served as a sidekick to the main Antagonists of the movie.

Bartok was Rasputin’s henchman. However, the Romanovs in Anastasia had been executed which left Bartok questioning his role as a henchman. He would constantly tell Rasputin to “get a life” and to try not to be so stressed.

These are just a few of the characters that could be represented in a bat tattoo. However, we hope that you get your bat tattoo for your own reasons. We hope this article gave you a little insight into some of the symbolism behind the bat tattoo and some of the different variations we have seen.

If you have decided to move forward with your bat tattoo and need help finding a shop or artist, let us know. We have years of experience matching customers to artists. We’d love to help make your bat tattoo vision come true.