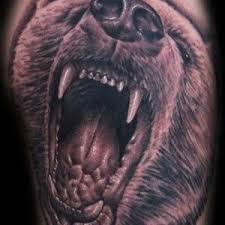 The bear is one of the most beautiful creatures on earth, and in tattoo form they both look great and have excellent meanings. Unsurprisingly, many people are interested in getting bear tattoos for those reasons and so many more. On this page we will take a look at some of the most popular bear tattoo meanings and the people who might want to look into getting one of these designs.

A strong and powerful symbol of boreal majesty, the bear provides an instant connection between humanity and nature. It’s one of the few animals that most people do feel connected to the first time they see one.

There are a number of great bear tattoo meanings to choose from, including the aforementioned strength, power, and nature. You don’t necessarily have to use all three of those meanings, though. If one means more to you than all of the others, then you can disregard all of the others that are attached to the animal. Of course, there are plenty of people who choose to get bear tattoos specifically because they like everything that they symbolize.

Bears also serve as a representation of the warrior. Many people choose this bear tattoo meaning because they either see themselves as warriors in life or they want to be tough like warriors. Either way, when this meaning is used most people will give the bear a ferocious look to show that it is in a fighting mood. What’s great about using this meaning is that you do not have to add in any words or other images to make the meaning come across to people looking at your tattoo.

Similarly, the bear also symbolizes bravery. Bears are known for never standing down when they or their cubs are put in harm’s way. This makes the bear tattoo an excellent choice for police officers, firefighters, and anyone in the military. Of course, it is a great bear tattoo meaning for anyone who takes pride in their bravery or who wants to show that they will be brave when called upon.

Those who see themselves as hunters, whether because they hunt or because they take care of their families, will often use that bear tattoo meaning. You really could get your bear tattoo designed in any way to represent this, but it would be clearer if you had the bear actually hunting something. You could even have the bear “charging” out of your skin to give it that hunting/attacking look.

Bears are masters of catching fish, so those who love being out on the water with their fishing poles could use this bear tattoo meaning. You could make this meaning clear either by having water in the design or by having the bear actually catching a fish. Or you could make it a more private meaning by getting your bear designed in any pose you want and with any or no images around it.

Bears are a strong symbol of motherhood as well. The female bear is left solely by the male after mating to rear the young, defending them with her life, even against attacking male bears. Bears were long seen as manly tattoos, but this meaning is excellent for women who love bears. This is the bear tattoo to get if you either take pride in being a mother or you want to honor your own mother.

Bears can be portrayed in a docile, serene state, indicating a peacefulness state in woods and forest. This is an interesting bear tattoo meaning since many people think of bears as being overly aggressive. The fact is that, like many people, they might look like they’d be aggressive but most just like being by themselves out in nature. This is a fantastic meaning for anyone who feels at peace when taking long walks in the woods.

Some people might prefer a bear that is roaring to display their ferocity and danger. Anyone who sees themselves as having a short fuse might love this bear tattoo meaning and the designs that come with it. A roaring bear can look great pretty much anywhere on the body, but they especially look nice as large designs on the arm or the back.

With dozens of types of bears, the kind of bear indicates various climates, terrains, and locations. And that’s important to keep in mind when you are choosing a bear tattoo meaning. Some meanings might work better with specific bears, and you might prefer the look of one over all of the rest. It’d be a good idea to look up many bears and their meanings before you commit to any bear tattoo. Since there are so many different species of bears out there, you can pretty easily come up with a bear that you would like to get inked on your skin and some meanings that make sense for you.

An image of a polar bear is an obvious tribute to the North, their natural habitat, and the harsh conditions that shape the population. A polar bear conveys an admiration of the snow and mountains that pervade the geography. If you love the cold, snowy climates and were already planning on getting a bear tattoo, the polar bear might just be the perfect one for you.

Brown and black bears are more widely spread and can be found around the globe. Brown bears are the most ubiquitous, with populations scattered in nearly every continent. Brown bears are often used in children’s fables as pedagogical figures and sometimes as humans in disguise. In most cases people will use brown or black bears simply because those are the bears they’re used to seeing. And that’s okay since all of the bear tattoo meanings out there can be attached to any type of bear.

More exotic is the sun bear, a type of bear indigenous to the tropical rainforests of Southeast Asia. Because the live in tropical climate, they do not hibernate, making them unique from other bears. Their coloring is also distinct, with a band of orange fur drawn across the chest, which creates an interesting image.

The giant black and white panda is another type of unique bear as they are completely vegetarian, eating only bamboo. Because of their climate, they do not hibernate either. Many people will choose this type of bear simply for its unique look.

In many ancient cultures, the bear was worshipped as a representation of one’s ancestors who have passed on. In North American Indian and First Nations’ culture, the bear is a symbol of a liberated spirit, free to roam as he or she chooses. For the Cree, the sight of a bear is the omen of a good hunt. The bear is the symbol of the warrior, calm and collected until provoked.

As far as design goes, it’s up to you to decide how detailed your bear tattoo will be, though this decision will often dictate how large or small your design is going to be. If you care more about the bear tattoo meanings than the look of the bear itself, then you could even get a bear silhouette. Regardless of whether you get a large or small bear tattoo, heavily detailed or not, you can use any meanings that work for you.

Anyone getting a bear tattoo, especially those who are getting more detailed designs or those with multiple images to add in more meanings, will want to work with an experienced tattoo artist. They should know how to design the images in a way that bring out those meanings. Be patient when looking for an artist so they can make your bear tattoo look exactly as you imagined it looking.

Because there are so many great bear tattoo meanings and the animals themselves pretty much always look cool in tattoo form, there’s a very small chance you’d regret getting one of these designs. Just be sure to take your time when choosing the type of bear you want tattooed on your skin, and pick a meaning or meanings that you’ll want to use for the rest of your life.