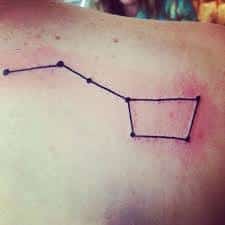 Since we were kids, we would look into the night sky and stare into the stars. We might have one day hoped we would become astronauts or just enjoyed the beauty of looking into the beyond. Wondering what was out there and looking at the constellations. Not all constellations are easy to see but one that I remember being able to see growing up was the Big Dipper (which technically isn’t a constellation). Many others must feel the way I do because if you take a look around, you are bound to see a Big Dipper tattoo.

For those that are fans of the great beyond, a symbol like the Big Dipper means a lot to that person. In this post we will review the symbolism behind the Big Dipper tattoo and what it means to the person wearing it. In addition, we will take a look at the different ways people having gotten this image tattooed and how that might affect the meaning of the symbol. By the end of this post, we hope you have a better understanding of what the Big Dipper tattoo represents and that we might give you some ideas of what to ask for when getting your very own Big Dipper tattoo.

What is the Big Dipper

The big dipper is found within Ursa Major, which is a bigger constellation. It is probably the most recognizable asterism in the sky and therefore, one of the most talked about.

The Big Dipper is also known as different names depending on the culture. It is also known as Saptarishi, the Saucepan, the Plough or the Great Wagon. This asterism is particularly noticeable in the night sky during the summer.

The story behind Ursa Major and the Big dipper is different depending on where you look. In Greek mythology, Zeus was hiding Callisto from his wife, Here, by turning the nymph Callisto into a bear. Unknowingly, the son of Callisto, Actas, went hunting one day and came across Callisto in her bear form. So Actas wouldn’t kill Callisto, Zeus put them in the sky together and these asterisms became known as the Big and Little Dipper. In this case, the Big Dipper tattoo represents the nymph, Callisto.

For some, this tattoo represents what the Zuni Indians believe. They believe the Great Bear (Ursa Major) guards the lands of the west from the northern frozen gods. When the bear is in hibernation, the gods of the north blow their frosty breath across the lands, ravaging the lands and destroying crops. This is until the bear wakes up in the spring to fend them off again.

When getting the Big Dipper tattoo, there are many variations that we have seen and that you can choose from if you are not sure. Obviously, there are many more ways to create this tattoo when designing it, but these are some that we enjoyed. We wanted to share some of these variations with you and if you can use them to your benefit, then even better.

Big Dipper Tattoo Within an Image

When you think of seeing the Big Dipper, in most cases you will be outside enjoying nature. It must be a clear night which also means the moon will be out. This scene has been captured in many tattoos. We’ve seen many cases when someone might get a nature scene tattoo with the Big Dipper shining bright in the background.

The torn skin Big Dipper tattoo lets everyone know when you are made of. Not technically, but you are representing yourself as someone who is one with the stars or universe. You might be a lover of space, so this tattoo lets the viewer know that you are all about the stars.

Big Dipper Tattoo with other Constellations

The Big Dipper tattoo is often tattooed with other constellations surrounding it. This gives the look of having the entire sky on your body. When incorporated into a tattoo like this, the Big Dipper might not stand out as much, but it makes it fun to try to find it within the tattoo.

These may seem like simple tattoos, but you should still do your research before embarking on this tattoo. The last thing you want to do is end up with a Big Dipper tattoo that doesn’t look like the Big Dipper. So, take your time and if you need any advice on who to see or where to go, the team at Tattoo SEO would be more than happy to help.