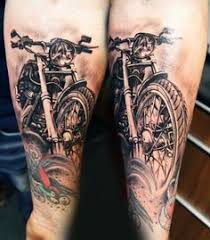 There are certain groups of people that you look at and just think they are one tough brand of people. In many of these cases, these people have tattoos all over them or specific tattoos that make you want to just steer clear. In this case, the group of people we are talking about are bikers. When I say bikers, I’m not talking about Tour De France. It’s not always the case, but when many of us look at bikers and see all their tattoos, we wonder what kind of person they are. However, I can assure you that many of these people are just like you and I except they wear leather and ride Harleys.

Another thing you might wonder is about the tattoos that many of these bikers have on their body. There are a number of different images and quotes we see tattooed on bikers. Some of them are affiliation tattoos and others are just general lifestyle tattoos that represent their love for motorcycles. However, to have tattoos and ride a motorcycle doesn’t mean you have to join a gang so many of these examples are for the average motorcycle enthusiast.

The post about biker tattoo meanings is here so we can understand the symbolism behind some of these images and what they mean to the bikers that have the tattoos. We will talk about the history of these motorcycles and the different variations we have seen in terms of biker tattoos. By the end of this post you should have some good ideas of a direction to go in if you are planning on getting your own biker tattoo.

The meaning of any biker tattoo is going to be up to the person that has it. It also depends on what the image that is tattooed looks like. There are a lot of different directions you can go in when you getting your biker tattoo but the thing to remember is that all of these tattoos represent one thing. A love for motorcycles and riding them. The people that have biker tattoos are the ones that have figured something out. They found a way out and we should all commend them for that.

If you have never ridden on a motorcycle, you don’t know what you are missing. The wind throwing your hair back and smelling the air that you’re driving through. There really is something special about the feeling you get when you are riding a motorcycle on the open road. This is why there is such a strong motorcycle culture in the world and it also explains why some get tattoos professing their love of the lifestyle.

There was a quote from a well known journalist from the United States that sums up what goes through the head of those that ride. His sentiment was that it’s all about embracing the ride. For years, getting away on your motorcycle has a been a way to escape the monotony of everyday life. It’s an amazing thing to be able to hop on those two wheels and let the world just shrink behind you. Those that are lucky enough to have experienced riding on a motorcycle know that it isn’t just about getting from point A to point B, but a lifestyle that allows those that may have marginalized in some way or time in their lives to feel like they are a part of something bigger than themselves.

The motorcycle has sparked the interest of media all over the world because of its slightly abrupt entry into what we know as the mainstream. However, more often than not, the small percentage of people that ride in the world end up getting a bad reputation because of movies a certain gangs. On the other hand, motorcycle enthusiasts’ status is on the rise because our misconceptions are being adjusted and that is a good thing.

Below are a few variations of the biker tattoo. We understand that there are going to be plenty more biker tattoos that we may have missed or not even mentioned but these should give you and idea of some of the ones you might see out there if you are looking.

The skeleton riding a motorcycle tattoo is one that seems to be more popular with the older crowds. Back when the older generations would ride, the association with was less than stellar so bikers always felt they were somewhat outcasted from society. The skeleton riding a motorcycle tattoo is symbolic of death or the darker parts of life so those with this tattoo are embracing the negative views that are had.

The Harley Davidson tattoo is one that many biker enthusiasts will get inked on their body. Harleys are well-known all over the world and are also known to be some of the best made and best quality motorcycles on the planet. To get yourself a Harley Davidson means you are full board in the motorcycle lifestyle. Harley Davidson is what people think of when you think of a quality ride and those with this tattoo would agree.

Then, of course, you’ve got the tattoos that represent motorcycle clubs. Every club has a different logo. From the Hell’s Angels to the Christian Motorcycle Association, the patches worn or logos tattooed are a representation of whatever they believe in. We just suggest not to get a tattoo of a motorcycle club if you aren’t involved with them.

Whatever biker tattoo you end up getting, make sure you are happy with the shop or artist you are working with and if you need a hand finding someone, let us know because we would be happy to help.