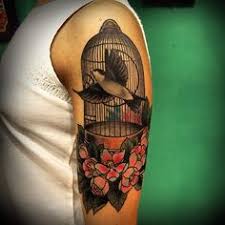 There are a lot of odd tattoos out there in the world. Everyone is different and all people are a little weird. We celebrate the weird here and root for the most random tattoos. People look for images that have symbolism to have tattooed on their body and we have seen some that we weren’t sure about when we saw them and the birdcage tattoo was one. It’s not that this image is odd or strange, it was just trying to determine what it meant.

After some research, we have come to appreciate this tattoo and know that it can have many different meanings. It might depend on the bird that is sitting in the cage, the shape of the cage itself and if the door is open or not. Cages have long been symbols and used for centuries. Saying that, it is no surprise that people are a fan of this tattoo and we see it on more people than we would have thought.

History of the Birdcage

Most would think the history of the birdcage is pretty simple. People like birds; people want to see birds all the time; people keep birds in a cage so they can do this. For the most part, this is completely accurate. The early birdcages were constructed to house these birds so they can be on display for all those who would like to see them. The early cages were handmade out of boxes and nets. They would use materials like woven reeds, bamboo, rope and wood. Some birds were even charged with the task of doing some very dangerous work. Miners would bring canaries into the coal mines and if they saw the bird fall dead, they would know there were gasses present that are toxic.

People of ancient times were also using these cages to have birds breed with each other and they would breed scarlet macaws. The Pre-Columbian community of Paquime Indians occupied and built an intricate settlement around the time of 900 to 1340 AD and these settlements were all made from adobe. Archeologists found around 60 macaw pens made from the feathers of these beautiful bird.

Across many cultures over time, the birdcage has been used as a metaphor and symbol. Going back to the hunter-gatherer times to times like today, the birdcage is a pervasive symbol which can be used in explaining many different cultural symbolisms.

Many people use the birdcage as an analogy to say that we are all caged up in our lives. From talking with one man with a birdcage tattoo, he thought the we were all the birds and society is the cage. We feel we have to do things because “they” tell us to and this is the cage we are all bound by. Whether we live in an immaculate home or in an apartment, we all deal with the everyday struggles of this life and we are always trying to evolve or come out of our cage.

Birds are able to fly and this symbol is often looked at as a sign of freedom. Birds are also linked to characteristics like creativity and inspiration as they flow with the wind. When birds are captured and caged, the obvious meaning of this image is a loss of freedom.

On the other hand, cages are more complex than that. We tend to have an unclear relationship with the cage. As much as the cage can be symbolic of keeping us from being free, it also protects us from things or people that we don’t want to encounter. Being in a cage isn’t always a bad thing and much of it depends on if the trade off is worth it to us. If we are locked in the house during the birth of a new child, we are at a vulnerable state and need the protection of the cage and this is why it is important to understand the context of the tattoo.

While you think there aren’t many variations of the birdcage tattoo, you would be mistaken. The great thing about getting a tattoo is that you can turn it into anything you’d like. If you want to add other symbolism to change up the meaning, that’s great. If you want to add something to reinforce the idea of what you are trying to portray, that is also awesome. Below are a few examples of different birdcage tattoos that we’ve seen.

The birdcage tattoo with an open door is a symbol of being allowed to go free. The cage is there if you need it for safety but you can come and go as you please. It might also represent a being released but there is more of a connection in the next tattoo.

Birdcage with Bird Sitting on Top or Flying Away

The birdcage tattoo with a bird flying out or sitting on top is a symbol of being freed. This might be overcoming something in your life that has kept you stuck in one place or a literal piece to represent you being locked up in jail. The idea is being let go to fly free again and let those creative juices flow.

Birdcage in a Tree Tattoo

The birdcage in a tree represents more that just the cage itself but also whatever kind of tree it is. This image might be used for strictly aesthetic purposes or it might take from the kind of tree it is. For example, an oak tree is a symbol of strength and wisdom so combining it with the birdcage with a door open might represent you regaining your strength in some way.