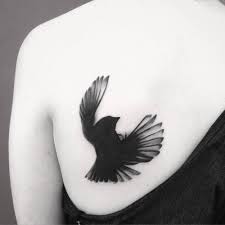 When waking up in the morning, there is nothing more pleasant to hear than the bird chirping. Pair that with some sunshine and you’ve got the start of a great day. Birds are symbols of free thinking and freedom in general. Their ability to fly through the sky is one of their characteristics that all wish we had. However, when you start talking about species of birds, you can get into some different meanings. In the case of the black bird, there are meanings and symbolism we should discuss.

People are fans of the black bird for various reasons. So much so they get the bird tattooed in various ways. The black bird tattoo is one with its very own symbolism and meaning and we will talk about that in this post. Just for reference, there is a species called a blackbird and there are popular versions of bird tattoos in which they are mostly silhouettes. In this case, those are called black birds. We can talk about the difference here.

In this post we will talk about black birds and the species blackbird as they have similar meanings when tattooed on the body. We will talk about some facts of the blackbird and discuss the different variations of tattoos that people get in regard to this symbol. By the end of the post we hope you have a better understanding of the black bird tattoo and that it might help you in your decision process of getting your own tattoo.

The common blackbird is a species in the true thrush family. You might also see it named the Eurasian blackbird or just blackbird when it doesn’t lead to confusion about other similar species. They are found all over the world and has been recently introduced in New Zealand and Australia.

The male blackbird is all black except for its yellow bill and eye ring. Females and younger blackbirds are more of a brown color. They breed in gardens and the woods and they build nice cup shaped nests in which they raise their young. They are very territorial over these areas and you might see some more threatening acts by these birds during the mating season.

Now in talking about the blackbird, we must also talk about birds of a black color which are also called black birds. There is much to be talked about as far as symbolism and tattoo meanings.

Black bird tattoos and dark colors in general can be linked to meanings of secrecy, the unknown, mystery, pure potential, perception and magic.

It is said that black birds are very secretive. The black bird does not reveal their intentions easily. This is true in dark energy or light energy. The demand our attention to learn from them.

The symbolism of both blackbirds and those that are black in color are connected to the phases of the moon. They go from dark to light and back again. To be capable of understanding the lunar phases, one needs to tap into a new way of sensing things. It is a commitment to trying to understand a higher level of knowledge (blackbirds flying) and to accept the potential voids (the dark silhouettes).

The bird, in general, is a representation of a higher path of knowing, life in the heavens and higher ideals while the black color is a symbol of pure potential. When mixed, we get the meaning of the black bird tattoo.

There are numerous variations of black bird tattoos and much of the meaning is in the image. Birds are used in many ways when tattooing and depending on how the bird is depicted, it might have an impact on the meaning. We will talk about a few examples and what they mean below.

Black Birds Out of Feather Tattoo

When you see the tattoo of a feather that is exploding into little birds, you can take that as a symbol of letting go and being free. The feather is already a wonderful image with a great deal of symbolism on its own, but when paired with the birds flying out of the feather, you have something different. It’s as if the birds broke their chains and are flying free. This might symbolize you freeing yourself from the constraints either you or society has placed on you. You were already a beautiful feather, but you were stationary. Now you can fly free.

The black birds on a wire tattoo usually has a message built right in. Bob Marley had a song called Three Little Birds which was a message of peace. It was said he wrote this as these same birds perched right outside his window for days on end. You might also see two birds on a wire with one facing the other. This is a symbol of love and companionship.

Black birds flying in a group can be a symbol of many ideas. One idea is of renewing or regrowth. It might also be a symbol of death. Birds fly together to migrate either leaving for winter or coming back in the spring. Depending on what images go with this image might tell the story. However, it might be left up to you do decide or it might change on your mood. You can most certainly find out by asking the person with this tattoo.

When getting your very own black bird tattoo, take your time in the process. You don’t want to be the person rushing in to getting your tattoo and then regretting it the next day. Take your time and make sure it is meaningful to you. If you need help finding someone to make your vision come true, let us know and we can help.