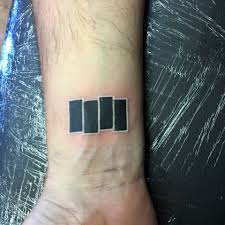 There are many bands all over the world that are loved by their fans. These groups bring the best out of their fans and connect with them on a level that fans didn’t know was possible. That is the beautiful thing about music; you can connect with a band that you have never met in your life. The music can help get you through tough times or motivate you to be better. Most people are fans of music and in some cases, they will get a tattoo of their favorite band to show their allegiance to the band and let everyone else know how big of a fan they are.

In this case we are talking about the legendary punk band, Black Flag. The brain child of Greg Ginn and with the famous lead singer, Henry Rollins, they created a band that would have a huge following. To the fans of Black Flag, they are on icon status and so much so, many of the fans have gotten a tattoo to represent Black Flag. Their controversial and angry style helped many kids looking for an outlet to come out of their shells and find common ground with others. However, we will talk more about the band deeper into this post.

In this article we are going to talk about the history of the band Black Flag and what they meant to our culture and to their fans. We will talk about the different variations of the Black Flag tattoo and what it meant to those that decided to immortalize Black Flag by getting a tattoo. We hope that by the end of this post you can start to understand why this band was so popular and we hope to give a few ideas on a direction you can go with your very own Black Flag tattoo.

All About Black Flag

Los Angeles would be hard pressed to find a punk band that was more definitive than Black Flag. The defined what it meant to be punk even though their music flirted jazz and experimental noise along with being considered close to heavy metal. Black Flag was constantly touring and played in all areas of the United States year in and year out. Black Flag was creating edgy, ferocious and hard core metal. In their music they talked about a point of view in politics and alluded to social criticism, but everything they did was done through cynical and seething angst, while actually being pretty funny in many cases. In addition, you could hear through their lyrics that they had a fondness to poetry and you can surmise that from their roots from the underground. Black Flag was an institution of punk and it didn’t matter who was in the band, and there were many, their four bar logo and attitude were favorites of the punk scene since the inception of the group.

Gregg Ginn was the brainchild behind the group and it was officially formed in 1977. He started Black Flag with Chuck Dukowski who played bass guitar, and later picked up a drummer in Brian Migdol. At the same time, Keith Morris was brought in to be lead vocalist. Ginn and Dukowski went ahead and started their own record label at the same time, and they released the band’s first EP in 1978 called Nervous Breakdown. Migdol and Morris left the group the year after that EP was released. They were replaced by Robo and Chavo Pederast while Morris started his own group in the Circle Jerks. Black Flag released Jealous Again in the 80’s and there started their infatuation with touring. In their first tour they built up a nice fan base. It was a small group but they were passionate. Pederast left the band after the release of Jealous Again and Dez Cadena was brought in to replace him. Cadena wanted to play guitar so they moved him to that which gave the band a much heavier sound. After that, Henry Rollins was brought in to be the new lead vocalist. The great story about this was Rollins was just a fan until he jumped on stage during one of their shows to sing with the band while they played in New York.

The Black Flag tattoo is a symbol of fandom and loyalty. It might also represent what the band believed in when the person got the tattoo. All in all, when someone gets this tattoo, they are using to show respect and admiration for one of their favorite bands.

We’ve seen some different variations of the Black Flag tattoo and we wanted to go over a few of them here. Now we know there are probably a thousand different ways to represent Black Flag in tattoo form but below are some of the more common and cool tattoos we have seen.

The four bar, Black Flag tattoo is the one you are going to see 90% of the time. The logo was designed by Ginn’s brother and stated that if a white flag represents surrendering to your enemy, the black flag is a symbol of never backing down and anarchy. This logo is very distinct so when you see it, you will know the person is a big fan.

Henry Rollins wasn’t in the original group of four that started Black Flag but he is probably the most recognizable member of the group. His hardcore, wild style was a treat to watch. He really knew how to fire the fans up. The Henry Rollins portrait is an ode to this wild man that was the lead singer for Black for from 1981 to 1986.

Then we get to lyrics and song titles which happen to be extremely popular when getting a music themed tattoo. The nice thing about getting a tattoo like this is that you can conceal it when you need to or let it shine when you are out. You can pick any number of lyrics, but make sure they mean something to you.