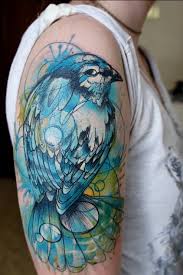 Birds make for beautiful and meaningful tattoos. If you are looking for a symbol to represent what you are all about, you will most likely be able to find it in the traits and symbolism of birds. Not only are there thousands of birds with different symbolic meanings but they are really pleasing to the eye as well.

Out of the many aesthetically pleasing birds out there, the blue jay is one of the best in our opinion. It’s striking blue color makes it recognizable to everyone. Because of this, the blue jay tattoo is one that a lot of tattoo enthusiasts choose to get when getting bird tattoo. Not only is it a great looking tattoo but it has a lot of meaning behind which makes it another great option.

About the Blue Jay

When the cold weather arrives, many birds tend to travel away from the cold heading to more accommodating climates. After they leave, we are left with the birds that stay all year round.

In looking at these year round birds, there isn’t a more recognizable one than the blue jay. Now while you might think the blue jay is just another bird that is pretty, it’s actually a very unique bird when you dig in. It’s one of the reason people love to have this image tattooed. I wanted to share some facts with you, so you can understand why this bird is so cool.

Contrary to the belief of most, the blue jay isn’t actually blue. The pigment held in their feathers is brown and when light is scattered to the structural parts of its feathers, we end up seeing a blue color.

Not only is the blue jay beautiful, but they live to be very old which sometimes can be translated to symbolism of wisdom. The oldest wild blue jay that ever lived was at lease 17 years old.

As far as what the blue jay eats, they are omnivores. They usually eat acorns, berries and other vegetation. However, they have been known to eat the eggs of other birds, but this doesn’t happen very often. They will also eat ants. The blue jay partakes in a behavior called “anting”. This involves taking an ant and rubbing it on its feathers. Scientists believe the blue jay does this to make them fit for eating as ands can secrete a substance that is harmful.

The blue jay is also a monogamous bird and will stay with a mate until one of them dies. This shows the type of personality the blue jay has. Not only do they look after their mate, but they are very territorial as well. They will protect their nest and partner by swooping down and attacking any unwelcomed visitors. This goes for humans too so if you notice a blue jay making aggressive flight patterns directed at you, you are probably close to their nest.

Now we get to the meat and potatoes and talk about why people choose to get the blue jay tattoo outside of the looks.

The blue jay is known for being determined, fierce and focused. It’s no surprise they have been used as mascots for many teams across the nation not excluding the professional baseball team; the Toronto Blue Jays. The blue jay is full of vitality and energy as it streaks through the air not hesitating to go after whatever it wants. The blue jay is about to burst with aggression and assertiveness because it knows the power of itself. The blue jay has an inner fire that is hard to quell so when you get the blue jay tattoo, know that you are representing a powerful soul.

The blue jay is filled with symbolism and a power that we would all hope to take on for ourselves. Below are some of the well known traits that the blue jay tattoo represents.

In a spiritual sense, the blue jay tattoo represents a passion for life and awaiting the next adventure in your life to face. Whatever it is you are trying to accomplish; the blue jay tattoo can help push you to push forward and take what is yours with authority and passion.

The blue jay is already extremely recognizable so in terms of variations, you are looking at styles and positions. Below are a few examples of the blue jay tattoo that enjoy.

The flying blue jay tattoo is one that we feel captures the blue jay in its essence. The blue jay flies free with assertiveness and confidence. The sight of a blue jay flying is something to be seen as you see a streak of color fly across the sky.

This version of the blue jay tattoo is going to on fans of the professional baseball team, Toronto Blue Jays. People love to rep their team by wearing hats, t-shirts and jackets, but the die hard fan doesn’t mess around with that and gets a tattoo.

We hope these explanations and picture examples below help you to get some ideas for yourself. Let us know if you have any questions on where to get your next tattoo.