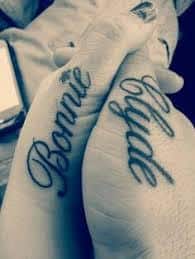 When you find your other half, it feels like the two of you can accomplish anything. It’s like the when you combine your powers, there is nothing in the world that can stop you. That is a great feeling to have. When you find your “partner in crime”, it feels like the rest of the world is a grey area. It’s a little bit hazy and the only thing in focus is the person standing there by your side. That is a powerful thing. One might even say you two are like Bonnie and Clyde. If you are in the situation where you found the person that makes you whole, you may want to represent this in a way the whole world can see how you feel. A Bonnie and Clyde tattoo might not be a bad idea.

In this post we will talk a little about Bonnie and Clyde to explain why there is such a strong association with that couple and any other couples that are really close and would do anything for each other. By the end of this post, we hope you have a better idea of what the Bonnie and Clyde tattoo means and help give you some ideas on what kind of tattoo you want to get to represent your love for your significant other.

But before we get into all that, check out some of these tattoos so you get a better idea.

Story of Bonnie and Clyde

So, we can understand why someone might compare you and your partner to Bonnie and Clyde, we should talk about who they were.

Bonnie and Clyde were also known as Bonnie Parker and Clyde Barrow. The two ran around with their gang during the Great Depression robbing people and killing people when they were faced with a confrontation. Their exploits caught the attention of public during the “Public Enemy Era” somewhere during the period of 1931 to 1935. The couple were known for robbing around a dozen banks but what they really loved to do was rob gas stations and small stores. They were believed to have killed several civilians and at least nine police officers. They were eventually gunned down by law enforcement in Louisiana.

It is said the depictions of the couple wasn’t completely accurate as members of their gang said they had never seen Bonnie shoot at anyone. However, she was Clyde’s companion and stuck by his side during all his criminal activities.

We are still talking about Bonnie and Clyde today, but it isn’t in a negative way when someone compares a couple to the devious couple. The meaning behind this tattoo is an undying devotion to another person. In our eyes, this is a compliment. To have someone that will stand by your side throughout all the problems you might have in life is a something to hold on to.

So, when someone gets the Bonnie and Clyde tattoo, they are letting the world know they will “ride or die” with that person. This is admirable and a great tattoo to represent your love.

Now just because we are talking about Bonnie and Clyde tattoos doesn’t mean they will always be pictures of Bonnie and Clyde. This couple is a representation of a strong couple that will stay together through thick and thin. There are other tattoos that represent this sentiment and we will talk about a few.

The Bonnie and Clyde tattoo is a the first and most obvious way to get this tattoo. There are people that will get portrait tattoos of the infamous criminal couple to show the strength of their companionship. We have also seen people just get the names, “Bonnie” and “Clyde” on their respective bodies. You can get creative with this tattoo and this is just the first example

Matching tattoos are a great way to represent the companionship between a couple. Many people will get the date they first met or their wedding date as a matching tattoo. It might be their version of a Bonnie and Clyde Tattoo.

Another version of this tattoo is to get lyrics or quotes on your body. We tend to see one person have the first part of a quote or song lyric and the other person in the relationship will finish the quote on their body. The lyrics or quotes will not make sense on their own and therefore, if the couple isn’t together, it isn’t complete.

The above tattoos are just a few examples of ways you can get your very own Bonnie and Clyde tattoos. Make sure that you figure out what you want your tattoo to be and then research the tattoo artist that will be able to make your vision come true. Every artist has a different style so don’t walk into a shop just hoping to find the right person. If you need help finding an artist that suits you, please reach out to us because we’d love to help.