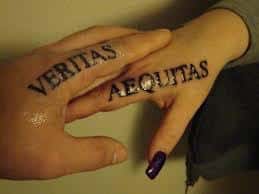 Some might wonder what sparked all this interest. This movie wasn’t a big box office hit nor was it nominated for any awards. It just happened to hit a chord with many people and more likely, the kind of people that love crime thrillers. If you didn’t know any better, you might think this was a Quentin Tarantino movie. However, the movie was written and directed by Troy Duffy and we’re going to go into the movie a bit so you can grasp why this became such an underground success and why so many people decided on a Boondock Saints tattoo. **Spoiler Alert**

The plot revolves around two Irish-American twin brothers named Murphy and Conner MacManus. The Boston locals were in church one day when the priest mentions a young woman who was murdered. Fast forward, Conner and Murphy were celebrating St. Patrick’s Day in a local pub when three Russian mobsters entered claiming they were staking claim to the bar because they wanted the land. Needless to say, the locals were not happy about this and a fight broke out. The next day, the Russians go looking for the twins as they were sleeping off a hangover. The MacManus boys killed the mobsters in self defense and then set the rest of the plot in motion.

Paul Smecker (William Dafoe) was the FBI agent assigned to the case. The MacManus twins ended up turning themselves in to the police where Agent Smecker interviewed them. Smecker decided not to press charges after hearing their story and held them overnight to avoid the media. During that night, Conner and Murphy got a calling from God essentially telling them to hunt down the bad people so the good people can flourish.

The brothers start with nine Russians they heard were having a meeting in a hotel. These were syndicate bosses so needless to say, this pissed a lot of people off. In the same day they killed all the Russians, local mob boss Giuseppe Yakavetta, better known as Papa Joe, sent one of his men to kill all the Russians. However, it was a setup as he gave his guy a six-shooter to kill nine men. This man’s name was Rocco and he ended up being saved by Conner and Murphy. He then joined the twins on their quest to rid Boston of the wicked.

Fearing he was next, Papa Joe hired a hitman named II Duce to kill the twins and Rocco. A gunfight ensued and all parties being shot and Rocco loses a finger. Agent Smecker ends up on the scene and finds Rocco’s missing finger and with this information, discovers the men involved in the shooting.

Agent Smecker was in a dilemma as he was sympathetic to the cause but was also an agent of the FBI. After considerable thought, he decides to help the MacManus twins in their quest.

The twins then plan to infiltrate the headquarters of Papa Joe to finish off the job. Smecker learns of this and learns the men were walking into a trap. The twins end up being captured along with Rocco and tied up. Papa Joe shoots Rocco but the twins end up escaping before they were killed. Papa Joe leaves as Smecker shows up in drag as a disguise. He kills numerous henchmen before being knocked out by II Duce.

II Duce enters the house to discover the MacManus twins saying a prayer over Rocco’s dead body. II Duce recognizes this prayer as his family prayer. Come to find out, he was the father of the twins and joined them on their quest as well.

Fast forward to Papa Joe’s trial. It was becoming known that Papa Joe would be acquitted for the third time in his life and the three MacManus men weren’t going to allow a fourth trial. They were able to enter the building with weapons by sliding them over the metal detector. They end up reciting their family prayer and then ending the life of Papa Joe in front of all. They were dubbed “the Saints” by the media for their actions.

Now knowing the story, you can imagine the excitement this movie created, and the buzz led to many Boondock Saints tattoos.

The MacManus twins both had a tattoo on each hand starting at the base of their thumb, moving up into their index finger. One said “Veritas” which is “truth” in Latin and Murphy had a tattoo that said “Aequitas” which means “justice” in Latin. This tattoo seems to be a popular one amongst fans of the movie. You might see this in the same fashion as tattooed on the twins or incorporating some other Irish symbol.

You’ll also see a lot of Celtic crosses tattooed on fans of the movie as the MacManus twins both had necklaces with the symbol on it. The Celtic cross goes back to Irish lore and their Catholic backgrounds.

Finally, you might see a Boondocks Saint tattoo with characters family prayer written in script. The prayer reads,

“And Shepherds we shall be For thee, my Lord, for thee. Power hath descended forth from Thy hand Our feet may swiftly carry out Thy commands. So we shall flow a river forth to Thee And teeming with souls shall it ever be. In Nomeni Patri Et Fili Spiritus Sancti.”.

Now that you have a better idea of the what this movie was about, and the tattoos involved in this movie, you might understand more of why someone might get a Boondock Saints tattoo. In essence, the idea is to stand up for the innocent and strike down the wicked. This is a noble thought, however, it’s better to get the tattoo than to get involved in being a martyr.

If you’re still not sure about the direction you want to go in with your Boondock Saints tattoo, please ask us for help. We can give you advice on what shop or artist you might want to visit so you can see your tattoo dreams come true. Make sure you do your research because you’ll be the owner of this tattoo for years to come.