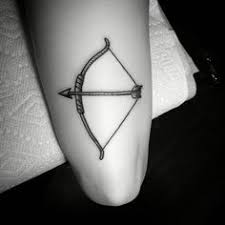 The bow and arrow is a weapon that has been used for centuries as a way to kill prey and enemies. The skill of using the bow and arrow is called archery and even in times like these when you can get your hands all sorts of guns, archery is a coveted skill that millions of people still enjoy.

History of Bow and Arrow Tattoo

The oldest intact bows reside in Denmark and are called the elm Holmegaard bows. These bows have been dated back to 9,000 BCE. The design of the Holmegaard bow still appears today in high performance bows.

This weapon was the main tool for warfare and hunting until the 16th century when the use of gunpowder became prevalent. By the 17th century, the organized use of the bow and arrow was finished in Europe, however, it continued into the 20th century in tribal warfare in the New World.

The bow and arrow tattoo can have a great deal of religious meaning as it is mentioned in many religious works and many times throughout the Bible. An example of this comes from the Book of Revelation 6:2.

In this verse, a crowned bowman rides a white horse and he embodies the first seal of this verse which talks about religious communication. The horseman is the begins his mission of “conquering and to conquer.” He is the one who starts “the beginning of sorrows” and is responsible for the demise of a quarter of the population of Earth.

There is a great deal of symbolism in this image of a crowned bowman riding a white horse, but we will talk about the bow he carries. There is no mention of arrows or a quiver in this proverb, but one can assume they were used if so much of the population was killed. However, one might also assume the battle was won with words and ideas.

The bow carried by the horseman symbolizes God’s judgement of all beings on the earth. Unlike the time when the sword was used by Christ in the striking down of the wicked, the bow insinuates God being distanced from his judgement.

Variations of Bow and Arrow Tattoo

In addition to the basic bow and arrow, there is a lot of symbolism that can be taken from the different ways this bow and arrow tattoo is portrayed on the skin. Depending on the what is happening in the picture could represent what the person with the tattoo is trying to convey.

Arrow Pulled Back on Bow

In many cases, one might see a bow and arrow tattoo with the arrow drawn back in the bow. To the person wearing it, this image could have many meanings but one of the ideas it represents is some sort of tension in one’s life. The tension from the drawn back bow could be directed at another image as to explain what the person is dealing with.

You might see a drawn back bow and arrow tattoo pointed at a heart. This would represent the person wearing it might feel that love is hard, and they haven’t had much luck so far. On the other hand, it might mean all the waiting and build up was worth the love they found.

Arrow Being Released from Bow

On the other hand, an arrow being released from the bow might represent the total opposite the aforementioned. The flying arrow might represent the release of tension or a breakthrough in life. A person with the bow and arrow tattoo could be telling the world they are making a positive break through and moving forward. This means they will not be held back by anything and they will fly free, so to speak.

The struggle of life is real and when we feel like we have finally figured something out, it is truly a liberating experience. What better way to show the world that you are moving forward or have had a personal breakthrough, than to get a bow and arrow tattoo with arrow flying through the air.

When you head out to get your next tattoo, make sure you do your research on what shop you want to go to and which artist you’d like to work with. If need any help with these ideas, please reach out to us and we would be happy to help.