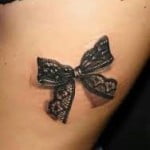 The bow tattoo is an excellent design choice for people who want an attractive tattoo that is very easy to make your own. Each one will have a bow tattoo meaning or two attached to it, making the design that much more personal. On this page we are going to take a look at why the bow tattoo is such an excellent choice for some folks. We’ll include the meanings that you can use with your bow as well as some of the design options that you can use.

A bow is generally a very feminine symbol as they are not often worn by men, other than in the form of a bowtie. That makes the bow tattoo a bit unique in itself since there aren’t too many designs out there that are known for being for women only. Unsurprisingly, women where their bow tattoos proudly since they know that there is no such thing as a male counterpart to it.

Bows were much more commonly used as a method of securing articles of clothing decades ago in more antiquated times when women were praised for femininity. Rooted in this history, the bow today is a symbol of the “girlie girl” or someone who is in touch with typically feminine-gendered ideas and preferences. Even if a woman is not the typical “girlie girl,” they might get the bow tattoo since they want to show that they are proud of their femininity.

Bows are generally made with various types of ribbon and worn to adorn hair, clothing and accessories. They are often used on women’s undergarment and lingerie which increases the feminine quality of the bow image. While some people prefer to get a plain bow tattoo with no other images around it, some will decide to get another small image or two to make it have a stronger feminine meaning.

Garter belts, worn around the thighs, are often fastened by a ribbon that is tied into a bow and used as lingerie or functionally to hold up stockings, though the latter is a more modern usage. This bow tattoo meaning comes off even stronger because it makes observers know that the owner got the tattoo for more reasons than just “it is cute.” The garter belt can be seen as both a sexual image or as someone who is very confident in themselves.

The bow can also signify security as it serves as to tie or fasten something together. When a woman gets a bow tattoo for this reason, they use the image to motivate themselves to do things they are scared to do. They might also look at the tattoo anytime they are scared or need help getting through something. It’s a meaning that many people won’t recognize since it is so personal. This is one of those bow tattoo meanings that many people will attach to their tattoos long after they get it.

Because of the bows that often accompany garters worn by women, the bow tattoo placed on the back or front of the upper thighs is a popular image, sometimes with the garter as well. This is seen as a strong sexual image, so the owner might get it to show off their wild side. It is also pleasing on the eye, so some women might get this version of the bow tattoo simply because they like the way it looks on them.

Lace bows are commonly used also as they emphasize the femininity due to the delicacy and the intricacy of the ribbon. This “delicacy” might be what the owner of these bow tattoos want to show off as they want to be seen as being precious. It doesn’t necessarily mean that the owner is weak in any way, but instead that other people need to be careful with them. This isn’t the most common bow tattoo meaning, but there aren’t too many other tattoo designs that could be used in its place for this reason.

The design of the bow is the most important thing, but you can add in even more meaning by strategically placing it on your body where its meanings will make a bit more sense. Some people like to put their bows on their thighs to make it clear that it holds either a sexual or feminine meaning, while others will place their bow tattoos on their wrists to show their pride in being a “gift” to the world. On top of being creative with the way that you design your bow tattoo, you should definitely think long and hard about where you can place it to enhance the meanings that you plan to attach to the bow.

A strip of any type of material can be made to tie into a bow and the pattern or texture can change the image. This would make the bow tattoo more meaningful since the owner would be able to choose an image that holds the most meaning to them. The bow would still come off as a feminine design, but the other images could mean absolutely anything to the owner.

A solid colored silk or satin bow with sheen creates a sophisticated and classic look. This is an excellent choice for anyone that wants to steer clear of any of the sexual meanings that are sometimes attached to bow tattoos. Of course, you can get this sophisticated look while also showing off your pride in your sexuality.

A bow of burlap, leather or another rougher material conveys a tough personality. This is the perfect bow design for women who have always been known for their strength. It could also be perfect for those who have a tough exterior but want to show that they do have a soft side with people they come to trust over time.

The combination of rough material and a feminine bow as an image reveals a more complicated and contrasting persona. There really aren’t too many symbols that can hold these types of contrasting meanings, so if you were already interested in getting a bow tattoo and you are a bit of a complicated person, this bow tattoo meaning is probably perfect for you.

Another important part of the bow tattoo meaning is the color of the bow. If you do decide to get a bow tat, you’ll want to know all about the colors that you plan on using in the design to ensure that it holds the exact meanings that you want it to. Below we’ll take a look at some of the most popular bow tattoo colors and the meanings that they hold.

Black in bow tattoos typically represents strength and mystery, which are two meanings that plenty of people would like to have represented in their ink. Just about any bow tattoo can represent mystery, but the fact that it’s black makes that meaning come a bit more to the forefront. You could even take this idea a step further and include skulls or other images in the bow to make those meanings even clearer.

Yellow bow tattoos are great for anyone that wants to show that someone in their life will never be forgotten. You will often see yellow bows worn on remembrance days, so most people will recognize what your yellow bow tattoo meaning is without you having to explain it to them. This is a good idea for anyone that wants a smaller tattoo to honor someone they love, though it can also work in a larger piece with multiple images.

Red represents sexiness or sophistication, which is an excellent combo of meanings. If someone gets a red bow tat, they are saying that they get their work done during the day and, because of that, they feel sexy. It could also show that their intelligence makes them feel sexy. Either way, you can be sure that anyone getting a red bow tattoo is not shy about showing how sexy they feel.

White bow tattoos usually represent innocence. These tattoos do not imply that the owners are weak, rather that they are proud to have not lost their innocence. This is a fantastic quality that people should be proud of if they still have it.

Women who want to show their pride in their femininity will want to include pink in their bow tattoos. Pink it the ultimate color for femininity, so people will know what your tattoo means should you choose to get a pink bow design. Pink is also a very underused color in the tattooing world, so your tattoo will stand out in the crowd if you get one of these.

These meanings for bow tattoo colors aren’t set in stone, but most women who get a bow design will know exactly what each of these colors mean before they commit to one. Of course, it’s important to know all of these meanings since you don’t want to just pick a random one and later learn that the meanings don’t work for you.

What’s great is that you can also blend multiple colors together in your bow design to customize it even further. Or you can even add other images into the bow to personalize the tattoo a bit. You can make it as complex or as simple as you want it to be, though you will want to know every meaning that can be used with every element of your design.

That is a lot of information on the bow tattoo and the meanings that can be attached to it, so you will want to take some time to come up with the perfect design. Remember that this is your tattoo, so all that matters is that the bow has a look that you will always like to look at and that it ends up holding all of the meanings that you want it to. You can go with a classic bow / ribbon design or you can work with an artist to come up with something original.

As you can see, there is a lot more to the bow tattoo than initially meets the eye. Most people realize that bows are often feminine designs, but they don’t know that these tats can hold multiple other significant meanings to their owners. If you are thinking about getting a bow tattoo, be sure to know the meanings that you want to use with it, come up with a design that you will always be proud of, and then hire a top tattoo artist in your area to do the work for you.