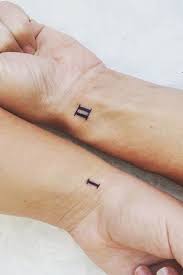 The bond between brothers is a special one that cannot be explained unless you have one. I don’t say this to be negative but it, in fact, a very special bond built on love, hate, respect and all kinds of different feelings. Because of the way many men deal with problems, there are times when we come to blows with our brothers. There is also an immediate understanding and respect for one another when these types of things happen. No matter what happens between you two, you know the other will go to battle with you no matter the odds. This is why we see so many brother tattoos in the world today. It’s a very special show of companionship.

Brothers don’t necessarily have to be related by blood. There are events in this world that when experienced together, bring two men together to create a bond as strong as any. The brother tattoo is show of this bond and lets the world know that if you mess with one of us, you are going to deal with both of us.

In this post, we will talk about the meaning behind brother tattoos and what they symbolize to the men wearing these. We will also review some variations of these tattoos we have seen and explain why they represent the bond between men. We hope by the end of this post you have a better understanding of the importance of a brother tattoo to the people wearing them and why they choose to be permanently inked to show the devotion had for one another.

The symbolism behind brother tattoos seem to be very obvious. When brothers get a tattoo to represent the bond had between the other, it is a way to show that person and everyone else that you will have their back forever. Brothers come from the same family or they can come from different walks of life and meet later. While a tattoo isn’t needed to show the loyalty between brothers, it is another way representing their support for each other.

When it comes to brother tattoos, there are many variations that can be inked to represent the message of unity and loyalty. People have been getting brother tattoos for years which gives us many options and designs to look at when deciding on our own. Below we will review some of the most popular versions of this tattoo we have seen.

The ‘My Brother’s Keeper’ tattoo is a very popular choice when getting your brother tattoo. This phrase comes from the story of Cain and Abel from the Bible. In this story, Cain killed his brother Abel. When God asked Cain where his brother was, Cain responded, “I know not; am I my brother’s keeper?”. In this tale, Cain’s explanation symbolizes the lack of responsibility we take in our fellow humans.

On the other hand, this tattoo can be flipped to say that “I am my brother’s keeper”, meaning I would look out for my brother no matter what. This tattoo is a strong statement showing the love one human being can have for another and in this case, it is a perfect case for a brother tattoo.

In many brother tattoos, you might see an image of two hands clasped together in a handshake fashion. The handshake is symbol of solidarity and togetherness. When brothers get this tattoo, it’s a sign of devotion from one to the other. It’s a popular image showing the bond between men.

Mario and Luigi are the well-known brothers from Nintendo’s Mario Bros. video games. These brothers were well known for working together to defeat the likes of King Koopa, Bowser and Wario amongst others. Many of us have an affinity toward this game. As a kid of the 80’s I played this game for hours on end. The Mario and Luigi tattoo is another creative example of a way to show the bond between brothers.

Birthday tattoos are an obvious choice for brother tattoos. This might be more relevant when you are a twin because you have the same birthday, but we have also seen siblings get the other’s birthday tattooed as a show of unity. It’s a simple tattoo but extremely meaningful.

Poems and Quotes are a great way to show the closeness between brothers. In many cases, one brother might have part of a poem and the other will have the other half of the poem. This is also the case with song lyrics. There aren’t many better ways to show the bond between two people like getting part of a song lyric on your body and having your brother finish the lyric on his body.

Example of half image tattoos would be something like half a heart on one brother while the other brother has the other half of the heart tattooed on his person. We’ve seen many examples of this including infinity signs split in half, the lock and key tattoo or superhero logos split in two. These are all examples of cool ways to show the unity between brothers. The two halves come together to make one. This is just like the bond between brothers.

However, you choose to show your loyalty to your brother with a tattoo, it’s going to have a great deal of meaning to you. These are just some examples we talked about, so you can start to come up with a brother tattoo that means something to you. We hope this gets you started in your search for the perfect brother tattoos.