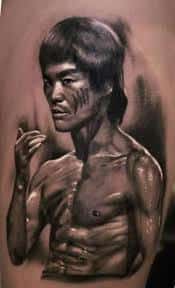 Bruce Lee was a legend. He was a jack of all trades in this world of specialization. Bruce Lee was a martial artist, actor, poet, filmmaker, philosopher and an all around bad ass. To many kids growing up, Bruce Lee was the man we all wanted to be. Bruce kicked so much ass that I don’t even think you can make a Chuck Norris joke about him. From having posters on the wall to watching all his movies, fans of Bruce Lee are the type of people that would do anything to show their fighting spirit and love for the master. In many cases, they might get a Bruce Lee tattoo.

A Bruce Lee tattoo is the ultimate sign of respect for a man who changed martial arts. The films he did reinvented what martial arts were for the viewers. His movies also got the attention of Westerners and pointed them to the Far East cultures. It also changed the way Asians were looked at in Hollywood. How else could you pay homage to a man that made such an impact on so many peoples’ lives. A Bruce Lee tattoo might be the answer.

Who Was Bruce Lee

Bruce Lee was the son of a famous opera star in Hong Kong named Lee Hoi-chuen. The family lived in Hong Kong during the Japanese invasion but escaped narrowly by going on tour with Lee Hoi-chuen. However, they returned to Hong Kong for four years after the tour and lived under Japanese occupation.

Bruce Lee’s mother was part of an affluent clan in Hong Kong which made Bruce’s childhood more of an easy road. However, that didn’t mean the streets were safe. After many Chinese fled to Hong Kong because of the Mao communist regime, overpopulation was happening and during the influx of people in Hong Kong, street gangs were springing up all over the place and in Lee’s neighborhood as well. After being picked on and getting into many fights, Bruce’s father wanted to enroll him in the martial arts, so he could learn to protect himself. The style that Bruce Lee started training in was called the Wu-style of T’ai Chi.

Soon after his training in T’ai Chi, Bruce began to train under the tutelage of Yip Man in the art of Wing Chun. The discipline of this martial art didn’t keep Bruce from getting into street fights and eventually he beat up a kid whose father was a member of the Triads. Out of fear for his safety, Bruce’s parents sent him to America.

Eventually, Bruce Lee went on to found his own form of martial arts called Jeet Kune Do. This style of martial art was developed in 1967. It was created after the first season of The Green Hornet. Lee was disappointed with a match that he had with Wong Jack Man and decided that traditional martial arts weren’t realistic when fighting in a real life and death situation. Lee wanted to create a style that he called “the style of no style”. Jeet Kune Do meant the Way of the Intercepting Fist. He would later regret naming the style like this because it implied there were specific rules to his style when the idea was to create a martial art that existed beyond the parameters of what your limitations were.

The Bruce Lee tattoo symbolizes fandom and the warrior within us. Clearly, a Bruce Lee tattoo wouldn’t be a choice of someone that wasn’t a fan. However, within the image of Bruce Lee, other meanings can be taken. To be resilient and live in the face of adversity is one meaning of the Bruce Lee tattoo. Bruce Lee didn’t have an easy life and many things stood in his way of becoming one of the most renowned martial artists ever. He didn’t quit, and the Bruce Lee tattoo is a reminder to not quit on yourself.

We have seen some really cool tattoo variations of the Bruce Lee tattoo. Below are some examples of the tattoos we’ve seen that are fashioned in honor of Bruce Lee.

The Bruce Lee fist tattoo is a really cool look and almost has an optical illusion effect on the person looking at it. The idea of this tattoo is to have Bruce Lee tattooed on the forearm. In this spot, the tattoo will have Bruce extending his fist out as he is striking someone, but his arm stretches down the forearm to combine with the wrist of the person getting the tattoo. When this is done, it looks like Bruce Lee’s fist is your fist. Check out some of the examples of this below in the images.

Whatever way you decide to get your Bruce Lee tattoo, make sure you’ve got the right person doing it. If you rush the process you could end up with a tattoo you’re not happy with. If you need a recommendation of an artist to go see, reach out to us. We would love to help you find the artist that will make your vision come true.