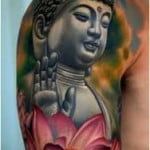 One way that people show their respect and love for their religion is to wear a symbol that represents the way of life. There are plenty of symbols out there that represent the different religions and ways of life. The reason why we keep mentioning a way of life is because those that follow the Buddhism don’t look at it as a religion but more of a way of life. It is a beautiful way of life to boot. Full of love and treating others with compassion, who wouldn’t want to represent this way of life. Many choose to do it by having symbols on the wall or statues, but others choose to get a more permanent way of showing respect and that is in the form of a tattoo.

In this case we are talking about the symbol that represents all of Buddhism and that is Buddha himself. There are many different ways that Buddha is tattooed as he is in a different position for everyday of the week and two different positions on one day. This is why you will see so many variations of the Buddha tattoo.

Buddhism was created by Buddha Shakyamuni. He was a royal prince born in 624 BC in the province of Lumbini. Lumbini is a portion of Nepal but in those days it was considered to be in the northern part of India. Buddha was brought into this world under the royal family of ‘Shakya’ with the last portion of the name, ‘Muni’ denotating ‘Able One’. Siddhartha was the name given to Buddha by his mother and father. At that point, the sky was the limit for this young man and there were many prophecies made about how he would impact the world. Until the age of 29, Buddha existed as a prince in the royal palace of his family. Soon after, Buddha decided to leave the comforts of his home and move to the wilderness to live a life of meditative study and live a spiritual and fulfilling life. Buddha was able to attain enlightenment 6 years after he started his journey. The location of this even happened under a Bodhi Tree in Bodh Gaya, India.

In all, there were eighty four thousand teachings delivered by Buddha. In establishing Buddhism, he wanted humans to be liberated from the constraints society puts on people along with leading them away from suffering in the cruel world. However, it was not enough to temporarily remove one’s self from suffering. Buddha’s purpose is to guide the willing to find a life of lasting peace and nirvana; all of which is inspired by love and compassion.

About the Buddha Tattoo

A Buddha is a Buddhist individual who has obtained nirvana, the state of supreme enlightenment. This elevated soul is an incredible teacher and model of finding contentment within the current life state.

Unsurprisingly, there are plenty of people who have Buddha tattoos and plenty who want to get one. Not only do Buddha tattoos have extremely powerful spiritual meanings to their owners, they also happen to look great no matter where they are placed on the body. On this page we will go over the most popular Buddha tattoo meanings and why people choose to get these designs over others.

The image of a Buddha is a representation of the intricate path of Buddhist beliefs and ritual, a tribute to the concepts of universal peace emphasized by the first Buddha, Siddhartha Gautama. Gautama proclaimed the virtue of self-discipline and nonviolence through spiritual meditation. Some people decide to get a Siddhartha Buddha tattoo over other popular Buddha tattoo designs because of what he stood for and how much of an impact he still has on the religion.

The image of the (or a) Buddha is an image of solitude, reflection, and quiet meditation. He is a symbol of love and compassion for all creatures and a representation of serenity in time of calamity. Someone who gets their Buddha tattoo for these reasons is the type of person who finds peace in solitude. It doesn’t necessarily mean that they are anti-social, but those who see the tattoo will probably know that they greatly value their alone time.

Shakyamuni, the title of the first Buddha, Siddhartha Gautama, is a slender man with curly hair, often depicted in gold or another expensive material. However the Buddha did not wish to be worshipped in such a way as he chose the life of poverty to truly understand suffering. His universal compassion is immediately associated with his image. People who get the Shakyamuni Buddha tattoo often want to emulate Siddhartha in every way that they can. They see doing for others as one of the most fulfilling things in life.

The Buddha is also a representation of protection. The celestial realm that can only be seen and understood by a Buddha is a map of the universe, future and past, that helps guide an individual. The image of Buddha, in this way, serves as a guardian. Protection tattoos come in many forms, but the Buddha tattoo is moving up the ranks thanks to the fact that more people are getting larger tattoos these days. Not only that, this Buddha tattoo meaning is a bit more clear than others, which makes it a great pick for some people.

Amitabha Buddha is the Buddha of Pure Land Buddhism, the branch of Buddhist commonly practiced in East Asia (China, Japan, Kores, etc.). This Buddha differs in appearance only slightly from Gautama and can be identified by his Mudra, the opened position of his hands. He became a Buddha after discovering the Path to Enlightenment described by the first Buddha, Siddhartha Gautama. Some people will get the Amitabha Buddha tattoo if they seek enlightenment in their lives, or they could just get it because they prefer this particular Buddha image over the others.

The Laughing Buddha, known as Budai, is a rotund, smiling image of a large, bald man who often carries a cloth sack. He is often mistaken for a Buddha, although he is not technically a Buddha, because he is identified as an incarnation of one who will become a Buddha, but has not yet. He is a symbol of laughter, joy, and the prospects of a fortunate future. Additionally, he is known as a symbol of luck. Obviously, those who both want a Buddha tattoo and a tattoo that represents luck will probably pick the Laughing Buddha over the others. They could also decide to get it if they are very positive people that love laughter in their lives.

This version of Buddha has him in a seated position with his right hand facing out towards you. There are two commonly used meanings for this depiction of Buddha. The first meaning is to overcome fear. The second meaning of this pose is of protection. Buddha’s right hand in the position it is in represents a shield. These are connected because if you are being protected, you will not fear.

The serenity Buddha tattoo is a commonly used to represent meditation and you might see this version on many yogis. This position looks as if Buddha has both of his hands face up, in his lap. In addition, you will see the legs crossed either in a Single or Double Lotus pose.

For those that are trying to improve their skills in mediation or just looking for calm or peace in their lives, this image of Buddha is the one for you. You will even see people put this specific statue up in areas of their home where want to relax.

This version of the Buddha tattoo shows him in a reclined position. It is said to represent Buddha’s last moments on this earth just before his last time passing and arriving in Nirvana. It is said that this was the lifetime where Buddha reached Nirvana so he was able to avoid samsara, or the process of birth, death and rebirth.

You can find this famous pose in Bangkok, Thailand in the form of a statue in Wat Pho. There are many temples throughout Aisa that show Buddha in this pose but Wat Pho is one of the most famous ones to see. Because of the importance of this image, it isn’t surprising to know that many love to get the Nirvana Buddha tattoo.

This is probably the common pose you will see in temples located in Thailand which makes it a very popular post to be tattooed. In this pose, Buddha has his left hand in his lap, right hand pointed at the ground and his legs crossed. This is supposed to represent the moment that Buddha reached enlightenment after six years searching for it in the forest.

With all of these very strong Buddha tattoo meanings, it should come as no surprise that this is a very popular tattoo right now. As is the case with many multi-meaning tattoos, people who get the Buddha tattoo can attach one meaning when they get the tat and more meanings later on. Or, of course, you can decide to get a Buddha tattoo simply because you like the way that it looks and you can find a meaning in it in the future.

What many people want to know is what type of Buddha tattoo design they should get. Well, this comes down to personal preference. The three most popular Buddha tattoos are the ones listed above, but these designs can be tweaked to suit the owner’s preferences. You can get them in just about any color and any size, so this is a very versatile tattoo design. The most important thing is that you get a Buddha tattoo that you can be happy with for the rest of your life.