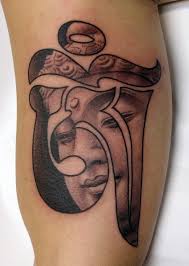 When it comes to tattooing, religion is always a popular topic when looking for something to get inked. Tattooing is one of the more popular ways to show your devotion to your chosen religion. Some of the more popular religions these days include Christianity, Hinduism, Islam and our subject today, Buddhism.

Buddhism has the fifth most people following the region behind Christianity, Islam, Nonreligious (Atheist/Agnostic/Secular) and Hinduism. The religion of Buddhism is really beautiful and founded on peace and treating people the right way. It’s a religion with a great deal of beautiful symbolism and art. This makes for some great subjects to be tattooed. The rich history and beautiful symbolism make for some great tattoo work.

In this post we will talk a little bit about the history of Buddhism and the history of tattooing there. For the most part, we will talk about the different variations of the Buddhist and some of the major Buddhist symbols that are chosen for tattooing and what they mean. By the end of this post you will have a good number of ideas for your next tattoo and if you are looking for a Buddhist tattoo, this will be a great resource.

The Origins of Buddhism

Buddhism was founded by Buddha Shakyamuni. He was born in 624 BC as a royal prince in Lumbini. Lumbini is part of Nepal but back then it was part of northern India. Buddha was born to the royal family of ‘Shakya’ with the final part of the name, ‘Muni’ meaning ‘Able One’. Buddha was given the name of Siddhartha by his parents and from there, many great predictions were made about where his life would lead. Up until he was 29, Buddha lived as a prince in the family’s royal palace. At this point, Buddha ventured out into the forest to live a life of meditation and follow his spiritual life that he was born to follow. It took him six years to attain enlightenment and he did so in Bodh Gaya, India under the Bodhi Tree.

Buddha provided eighty four thousand teachings in all. In founding Buddhism, he wanted to help lead all living beings away from suffering and liberate them permanently. Temporary liberation from the suffering people were experiencing wasn’t enough. Buddha is motivated by compassion and love and his focus was to help the living find lasting nirvana and peace.

– The people that follow the Buddhist religion do not acknowledge a supreme deity or god. Instead, the choose to focus on moving closer to total enlightenment. This could be described as a state of inner wisdom and peace. Once followers reach this place, it is said they will experience nirvana.

– Buddhism is an evolving and tolerant religion which leaves much of the teachings up to interpretation.

– Self-indulgence and self-denial are both encouraged within the religion.

– Buddhism isn’t accepted as a religion by everyone. By those that don’t see it as a religion see Buddhism as a “spiritual tradition” or a “way of life”.

– Buddhist are known to embrace the idea of karma which is the law of cause and effect. The also embrace the concepts of reincarnation.

Below are some of the most important images in the Buddhist religion and most popular choices to have tattooed on the body to represent Buddhism. The Buddhist tattoos all represent something unique in themselves. The first eight variations are known as the Eight Auspicious Symbols. These come from traditions from Mahāyāna. This is especially the case in Tibet. No one is sure of the origins, but it is said they come from an era pre-dating the life of Buddha and from Indian traditions. Below are the explanations of the general beliefs that come with these symbols.

The lotus flower tattoo is a common symbol to have tattooed if you want a Buddhist tattoo. Because the lotus flower sits beautifully on top of the pond and mucky water, it represents our abilities to live with purity and wisdom above the things that are dark and mucky. There is a saying that says, “no mud, no lotus.” This is a reminder that the lotus turns into something beautiful out of the dirty much. It is also a symbol of a transformation into liberation from suffering.

The umbrella tattoo is also known as the parasol and is a representation of the idea of protection. This is the case in several cultures and it is the same for the Buddhists. It is said to protect you from evil and harm while also symbolizing Buddha’s teachings and his protection.

The fish tattoo is depicted as two fish and are often misidentified as being koi. They are usually another type of carp and they represent our ability to swim in the oceans of delusion and suffering care free. Just as the fish swims in the vast waters of the ocean, the fish tattoo is a reminder that we can still be free.

The victory banner tattoo is just what you think it is. It is a depiction of the victory of the teachings of Buddha over delusion, craving, hatred, ignorance and anger. If you go to any retreat or monastery, there is a chance you will see these victory banners hanging in there.

The vase tattoo is a symbol that is said to remind you of the teachings that Buddha has gifted living beings. There are many treasures and gifts from practicing the dharma including compassion, loving kindness, mindfulness and concentration to name a few.

The endless knot tattoo is said to have a few different meanings. One of the meanings is said to be the representation of the ongoing path toward the dharma. The other one is that it represents everything that is interrelated or connected in our world.

These are just a few of the examples of some Buddhist symbols. There are plenty more to be had with a great deal of meaning. Your tattoo artist should be able to help you find them as well.