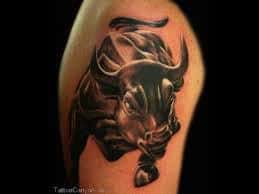 What can only be described as a massive beast, the bull is an animal that is not to be trifled with. Since before recorded history, bulls have held a special spot in human culture. Going back 17,000 years, the bull has been appearing in cave paintings. In the ancient Sumerian Epic of Gilgamesh, the mythic Bull of the heavens plays a role. This goes all the way back to 2150 BC. The reference of the bull even goes so far as making an appearance in the form of the Taurus in the zodiac. In the Hindu religion, Nandi is a bull that is worshiped because it is the vehicle of the Shiva and is depicted in many capacities. In addition to being worshiped in other cultures, the bull is also very popular mascot across the world.

Bulls have a strange relationship with humans overall. We use these animals to procreate with cows so we can factory farm and use them for meat. We worship them in some cultures and it’s illegal to touch them. Bulls are ridden for sport and if you can stay on for 8 seconds you did well. In addition, you’ve got the Running of Bulls in Pamplona where people try to avoid getting run over by these beasts. Once popular, the sport of bull-baiting was finally banned in 1835. This was when a bull was attacked by dogs bred to be attack dogs.

The above goes to show how bulls are thought of in all corners of the world. It’s strange how a creature can be so revered in some areas and then treated so cruelly in other parts. Whatever the case may be, bulls are an important animal in the world and it’s no surprise this animal is tattooed all over people across the world.

A bull is an adult male cattle. The bull is more aggressive and muscular than its counterpart called the cow.

The bull can stand for many qualities in a person. Having the bull tattoo on your body is a statement to let everyone know that you possess these qualities. Some of the meaning behind the bull tattoo are as follows:

Variations of the Bull Tattoo

Taurus is Latin for the word “bull”. It refers to a few different topics including the constellation, the mythological bull named Taurus and the astrological sign for example. In many cases you’ll see the astrological sign of Taurus on the body many people. The traits of the Taurus include being ambitious, sexual and practical. They say the people born under this sign have an eye for beautiful things. Positive traits of the Taurus include being generous, dependable, down to earth, independent, patient and persistent. Some negative qualities include being stubborn, lazy, self-indulgent, frugal, possessive and materialistic.

The bull skull tattoo is seen on many men and women. It tends to be seen more in the western United States and Texas though. It’s the longhorn state for a reason. Now the Native Americans have been using the bull skull in their art and symbols for many years. When wearing the bull skull tattoo today, it has many of the same meanings as the other bull tattoos. Those include strength, durability, courage and toughness just to name a few.

There are a few teams that use the bull as a logo and mascot. The Chicago Bulls definitely stand out as probably the main team with the bull mascot that most would know. You can also say the Texas Longhorns fit in there as well as the University of South Florida Bulls. The Chicago Bulls of the 90’s really represented a toughness and grit that would coincide with the personality traits of a bull. They won six championships during the 90’s. The Texas Longhorns also have four national championships including their most recent one in 2005. The South Florida Bulls haven’t won any national championships, but they constantly put tough teams on the field. Maybe some of these teams have invoked the power of the bull and applied towards winning games.

Another way you might see the bull tattoo portrayed is in a mid-jump or “raging” as they might say. There is a saying that goes, “mess with the bull and you’ll get the horns”. This saying didn’t just come out of anywhere. This came about from people instigating the bull or even riding them like in the rodeo. The goal in the rodeo is to ride a bull for eight seconds. However, we would suggest if you’re going to be looking an angry bull in the face, it would be better to do so while it’s tattooed on your arm and not while it’s running you down.

No matter which style of bull tattoo you decide to go with, make sure you find the right shop and artist to help you along the way. In addition, do you research on the tattoo you’re getting. This is permanent so make sure you will want to see 10 years from now.

We hope by reading this you’ll have a better idea on the bull tattoo meaning. Also, take a look at all the pictures below. We hope they will give you a better idea on what kind of bull tattoo to get. If you are still not sure of what you want or know a good artist to see, reach out to us. We love hearing from tattoo fans and would help you with a recommendation. We’ve got years of experience in matching our visitors with the right tattoo artist so give us a chance if you are having trouble.