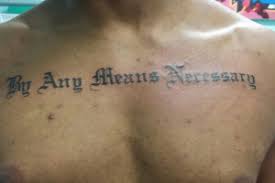 Throughout time, there have been many expressions that have been spoken that have made big impacts. Words and ideas are powerful. There is a saying that says that ideas can be life changing. Sometimes all you need to open that door is just one good idea. Sometimes these ideas are so thought provoking or entertaining that people will decide to get the phrase tattooed on their body as a constant reminder of their favorite expression or phrase. Ideas and sayings can be infections and can create movements. In this case, what we are talking about is a statement that changed a way a whole group of people made decisions for a long time.

Today we are talking about the phrase, by any means necessary, and the impact it had on an oppressed group of people in the United States and the people that get this tattooed on their body. To some, this might just be a quote they may have heard once or twice, but there is a great deal of historical significance to this expression and it is important you understand what it is before you go off and get a tattoo of it.

In this post we are going to talk about the origins and meaning of the phrase, “by any means necessary.” We will talk about where this was first spoken and how it impacted the world as we know it. We will also talk about the “by any means necessary” tattoo and what it means to those that have this expression tattooed on their body. Even with a phrase, there are many kinds of variations that can implemented to the tattoo that might change the idea or the meaning of this tattoo. By the end of this post you should feel you have a better understanding of this phrase and why so many people choose to have in enshrined on their body.

Origins of “By Any Means Necessary”

“By any means necessary” is a translated expression that was originally used in the play Dirty Hands, by the French intellectual Jean Paul Sartre.

Later, and where most people know this phrase from, is during the civil rights movement when Malcom X delivered a speech at the first rally of the Organization of Afro American Unity in New York. This speech was delivered on June 28, 1964 and in it, he talked about equality, justice and freedom “by any means necessary.” The idea behind this speech was to take back the freedom that all Americans were supposed to have any way you could. If violence wasn’t needed, don’t use it but if it was then it was ok. Malcom X was a strong personality and handled things a bit differently than Martin Luther King Jr. who also was a civil rights leader. However, King Jr. would never advocate violence while Malcom X didn’t rule it out.

This was a powerful statement by Malcom X and it led to a movement that created a great deal of awareness.

Malcom X (Born Malcom Little) was a Muslim minister of African American descent. He was also a human rights activist. Malcom X was a brave advocate of human rights for black people and his admirers followed him because of his conviction. He was a man who held back no punches when talking about the white America that had been the cause for some many crimes against black Americans. The people who weren’t fans of Malcom X accused the man of preaching violence and racism. In terms of influence, Malcom X has been called one of the greatest African American leaders ever.

Malcom X had done time in prison, converted to Islam and seen a lot of bad things in his day. He also turned everything around and became a man that will always be remembered. He ended up being murdered by three members of the Nation of Islam after he had grown disillusioned with the Nation and went on to embrace Sunni Islam.

By Any Means Necessary Tattoo Meaning

This tattoo is still as powerful today as it has ever been. In many cases, people will get the “by any means necessary” tattoo as tribute to Malcom X and what African Americans had gone through and suffered through for years. This tattoo is a way to pay homage to a man that created an idea that spread like a wildfire. His bravery was passed on to many of his followers who protested and didn’t sit around waiting for something to happen to them. This idea of “by any means necessary” is a way to tell the world that you will get what you want and take it if you have to.

By Any Means Necessary Tattoo Variations

When getting this tattoo, there different ways you can have it done to send a message. One symbol in a picture or tattoo can change the symbolism of the tattoo so when you are thinking of getting the “by any means necessary” tattoo, think about what it means to you.

Many people get this phrase tattooed on their body with an image of Malcom X. Malcom X led the way for many in the Civil Rights Movement and went down in history for his work for African Americans. By getting the image of Malcom X tattooed by this phrase, you are reinforcing the ideas that Malcom X shared with many on that day.

Outside of that, you can make this tattoo mean whatever you want. You don’t have to explain it to anyone. The idea is to follow your dreams and get what is rightfully yours.

Let us know if you need help finding a tattoo artist.