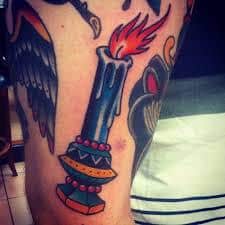 If you don’t know what a candle is, you have most likely been living under a rock your entire life. The candle has been a part of humanity for a very long time. The candle was our first source of light and now it is used for many reasons including light, fragrance or pure aesthetics. Not only does a candle look good in your bathroom or on your coffee table, it is also known to look pretty damn good when tattooed on your body.

When looking at getting a tattoo, the candle is a great option because it looks great and there is a whole lot of meaning behind this simple wick with wax wrapped around it. Because of the history behind the candle, you can imagine that people have associated meanings and traits to this object along the way. It’s going to be our job to explain that.

History of the Candle

For more than 5,000 years, candles have been used to light up a person’s room or used for celebrations. It is said the first candles were developed by the Ancient Egyptians. By soaking a torch made of reeds and pithy core in animal fat, they were able to create illumination that would stay lit for periods of time. However, objects had no wick like the candles we know today.

It is true the Egyptians were using wicked candles in 3,000 BC but the Romans are the ones who are credited with making the wicked candle first. They would do this by using melted tallow or beeswax and dipping rolled papyrus many times over. The result of this process was a candle that was used to travel at night, religious ceremonies and lighting your home.

The early Chinese were said to have made their own versions of the wicked candle by rolling wax that was made of insects and seeds in paper tubes. They used rolled rice paper as the wick for their candles. Candles were made of wax that was taken from tree nuts in Japan while the folks in India used wax made from boiling cinnamon tree fruit.

Candle weren’t just used to illuminate your way in the dark or keep your home lit. They played a very important role in ceremonies regarding religion. In Jewish religion, the candles are lit for Hanukkah. Hanukkah is the Jewish Festival of Lights and it goes all the way back to 165 BC. The bible makes reference to candles as well. It is said that Constantine used candles during Easter services in the 4th century.

By the 20th Century, byproducts from the oil and meatpacking industry were being used to create candles. These were stearic acid and paraffin.

The popularity of candles was steady until the middle of the 80’s. This was when people started using candles as decoration. Suddenly, candles were being made in different shapes and sizes and ranging in all sorts of colors and scents. The rest is history as candles are still popular today for a multitude of reasons.

The meaning of the candle tattoo will vary depending on the imagery of the tattoo. However, we will talk about some of the more well-known candle tattoo meaning.

The symbolism of the candle tattoo holds meaning for both women and men that have this tattoo. Much of the meaning revolves around honor, religion, love, faith, goodness and wisdom. Because of the religious use of the candle, much will have to do with this. However, there are some other meanings.

The candle burning is symbol of fleeting time. When the wick goes out, your time is done so someone with the candle tattoo might be making an oath with themselves to live life to the fullest and don’t let the fire go out before you have accomplished all that you meant to. Often you will see the candle paired with a skull to emphasize this meaning.

The color of the candle or flame might also hold meaning for the person wearing it. For instance, a green candle would represent healing, good luck, abundance and success. The red candle will symbolize love, desire, courage, vitality and protection. If you look up the meaning behind colors, you can see the one that fits you best or the color with traits that you most like to acquire. Whatever you choose will be unique to you.

Below are a few variations of candle tattoos with different meanings.

The double-sided candle tattoo is meaningful and is set to give you a reminder to slow down. There is saying that talks about burning the candle at both ends meaning you are going to burn out. Whether you’re talking about work, school or relationships, you have to make sure you are taking time for yourself or you will burn out. This tattoo will be an everyday reminder.

The candle with the skull tattoo is a reminder of our mortality. We talked about it above but once the candle goes out on your life, it’s over. The candle is always burning so it is important to “smell the roses” and enjoy life while you can. Life can move really fast and you don’t want to get to a point in your life where you wish you could have gone back and appreciated it. This tattoo will help remind you.

Whatever candle tattoo you choose to go with, it will be one full of meaning for you. Make sure you know what you want and what you want it to represent and you will be a happy person with a great tattoo for many years to come.