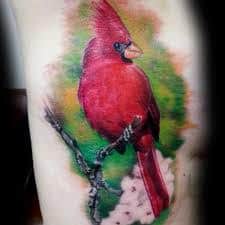 The Cardinal is an extraordinary bird that draws the attention from anyone looking in it’s direction. Because of this, it is no surprise this bird holds a great deal of symbolism in different cultures and for those that wear the cardinal tattoo, it can have multiple meanings.

They reside in mostly the Eastern half of the United States and much of Mexico. In these areas, you can usually find the Northern Cardinals in parks, backyards and amongst the shrubs of dense forests. They forage near or even on the ground so you can find these beautiful birds close to the forest floor.

As stated above, the cardinal represents a few different ideas. One could guess by gazing upon this magnificent bird that it would hold a special place in the hearts of those that see this bird flying through the air.

These birds represent Christmas and that symbolism started back in Germany when craftsmen would build birdhouses for these birds as they didn’t migrate and were always around in winter. They are also a wonder to see so keeping them around and out of the harsh elements were in the interests of the birds and builder alike. Soon, seeing a cardinal around the Christmas holiday represented compassion, happiness and hope along with other positive feelings associated with this time of year.

To many, the cardinal tattoo represents power. If you were to look at this bird, you might not deem it powerful or aggressive by nature but you would be mistaken. Both male and female cardinals are well known for defending their territory with ferocity. This is especially true during the spring and early summer. Cardinals are known to fight for hours on end each day to defend their territory. You might even see them attacking their own reflection in a window because they think another male has shown up. Afterall, the brighter the colors on the cardinal, the more the females will notice so keeping other males out of their territory is exteremly important. Therefore, the cardinal tattoo might represent power or aggression.

In addition, to the them symbolizing power, there is also a loyalty that comes with protecting one’s home. The sense of duty that the cardinal has in protecting their territory shows how prideful they are and they would never let another outsider invade.

The feeling of love and happiness is often associated with the cardinal as well as the cardinal tattoo. Most people we have talked to associate the bright colors and the wonderful song the cardinal sings with feeling good and being happy. It’s not everyday one gets to feast their eyes upon the this bright and elusive bird but when you get a chance to see it, you won’t be surprised when you feel a sense of joy being in their presence.

Red is known as a regal color and the male cardinal is flush full of the color red. Therefore, the cardinal tattoo also represents grace and nobility. There is really something special about this bird and they are one of the most recognizable birds in the world. You won’t find many people that wouldn’t know what a cardinal was when they saw it. In addition to their beauty and color tone, the cardinal is known for their showman ship and style. Much like the noble class of old, the male cardinal attracts his mates by being the brightest and having the best song.

Cardinals are a great choice for a totem and those that attract this animal as their totem tend to love life, are happy and are naturally energetic. You can call upon this bird during times of sadness or seasonal depression in the winter. Because they stick around during the winter months, their bright colors are a reminder of good things to come and that the bright can truly thrive in these cold and gloomy conditions.

The Dalai Lama once said to “Find hope in the darkest of days, and focus in the brightest.” This can be applied to seeing the cardinal in times of melancholy.

Many choose to take the realism route when it comes to getting their cardinal tattoo. Because of the natural beauty of this bird, anything other than realism might seem a disservice to the animal itself. Those choosing to get a realistic cardinal tattoo respect and adorn the way the bird is in nature and want to be reminded of this when they look on their skin.

We also tend to see a lot of watercolor cardinal tattoos. Again, this has to do with their already vibrant colors. They just so happen to blend perfectly with other bright colors making the cardinal tattoo a prefect candidate to be tattooed in a watercolor style. When done correctly, watercolor tattoos are wonderfully delicate and really represent the beauty and grace of the cardinal.