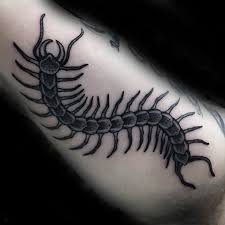 Many people enjoy the things we think are beautiful in life. Things like sunshine, bunnies, rainbows and so on. It makes them feel good to see these things. It makes them comfortable. However, some of us enjoy a bit of the creepy and crawling things in life. Those things that make you squirm or make you think of the darker things out there. It’s not for everybody, but if you are a fan of this type of thing, the centipede tattoo might be one for you.

Your tastes in this world don’t define you. On the other hand, when someone sees a big centipede tattooed on your body, they’re going to wonder what kind of person you are. They might make assumptions but that’s ok, we know who we are. We’re the type of people that have dinner parties with horror movies playing in the background. The type of people that still dress up for Halloween. In other words, we are pretty cool. The kind of person that has a centipede tattoo is the kind of person I want to know.

Centipedes are part of the group arthropods and are small invertebrates. Centipedes can be found all over the world including the cold weather of the Arctic Circle. They are so easily found because there are over 8000 species of them. These arthropods usually are found in tropical rainforests, prairies, forests and savannas. If they could choose, they would stay in moist dark places. They spend much of their lives living inside rotting woods and hiding under rocks so you won’t see them just wandering around too much. There is no shortage of centipedes in the world and that’s why you can find them in the coldest climates to inside your home.

The name, centipede, means “one hundred legs”. However, they usually have a little more or less but never 100. Depending on the species of centipede, they can have up to 191 pairs of legs or as little as 15. No matter what species the centipede is, they always have an odd pair of legs.

Centipedes have a different number of legs throughout their lives. As they grow, they molt legs and grow more. This happens to be very useful when a predator is attacking them. They are able to escape the grasp of the predator by sacrificing a few legs and all they’re left with are those legs. The centipede will then scurry away on the legs it has left and then regenerate those over time.

One more important fact about centipedes is that they’re carnivores. They will sometimes find a meal that is already dead, but they are hunters primarily. Bigger centipedes can take down frogs and small birds while smaller ones will feed on other insects, annelids and mollusks to name a few. They will do this by biting their prey and injecting their venom. Then they’ll wrap themselves around the unfortunate soul and wait for it to die.

In Asian cultures, the centipede is a powerful image as well. Because they are able to poison and frighten most things, they were comparted to Chiefs. Asian legends say that even the dragon was scared of the centipede.

However, many will get this tattoo because of their love of the creepy things in life. Centipedes give the average person the “heebie jeebies” and some of us love that about the centipede. Having the centipede tattoo is just a representation of the scary things in life.

The centipede tattoo with the centipede crawling around a skull is one way we have seen this image. Many times, centipedes are portrayed as insects that are around dead bodies and eat them. This is probably true as centipedes are carnivores and they will scavenge for a meal.

Centipedes have long been associated with death as have other insects and rodents. When it is wrapped around a skull, you know the centipede tattoo is a sign of death.

The 2009 movie, The Human Centipede, was a horror movie to make even the most experienced horror movie watcher wince. In short, a crazy doctor captures some kids and sews them together by making one long, segmented “human centipede”. This image is hard to shake but it happens to be a popular option for a tattoo.

Other than that, you will find many variations of the centipede tattoo and mostly in different colors on different parts of the body. The nice thing about the placement for a centipede tattoo is they can fill almost any space. From going along a hand up on to a finger, to wrapping around in a circle to fill a space on a thigh or bicep.

As far as difficulty of the tattoo, there isn’t a great deal going on with it so finding an artist shouldn’t be as hard as you might think. Just take a look at their portfolio and make sure their linework is up to your standards. If you need help finding someone to help you out, let us know because we’d love to help by giving you a recommendation.