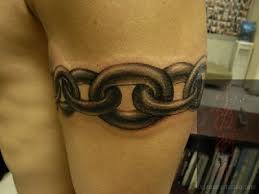 When people see the chain, there is often a negative connotation attached to the image and it makes sense. In most cases the chain represents locking someone up or holding them down. The phrase is used in many cases and people even refer to their significant other as the “old ball and chain”, representing the idea of imprisoning you in some way. Either way, there are a lot of reasons to get a chain tattoo and the chain holds a great deal of meaning for those that have the tattoo. Your best bet to find out what it means is to ask the person, but we’ll go over some meanings as well.

On the other hand, there a lot of chains that are used in other ways. Not all chains were used to restrain. Some are used to set you free in a sense or to hold something important in place. There are a lot of variations that we can talk about. We will get into it so you can understand that to have a chain tattoo isn’t always a negative thing.

To begin, the chain was used in a way that helped more people than hurt. We thought it might be fun to address some of the ways chains were used back in the day outside of restraining people.

You can trace back the use of the chain back to 225 BC when the word was used to describe the tool used to draw a bucket of water up a well. This word first originated in the Indo-European language.

Sketches of the first steel chain were drawn by Leonardo da Vinci in the 16th century. These chains were most likely used to pull as opposed to wrapping around something. These chains had metal fittings, plates and pins.

As for keeping up with the technology, it took a while to catch up with the concept of the chain. It was difficult to maximize the growth until the 19th century because of the problems with processing and manufacturing steel. They got it figured out when newer technology made bearings and steel chains possible. During the 1800’s, a man named Gull from France go the patent on a chain that was similar to a bicycle chain. It was dubbed the Gull Chain and is still used in modern times.

Then came the molded chain which was invented during the 19th century and things took off from there. The detachable chain with identical cast links was created. After that came the pintle chain with a separate pin. Both of these have been improved upon over the years. These are still used today in many capacities.

The bushing was invented during the 1800’s and it changed the game. As opposed to the Gull Chain, new chains started to be developed with bushings and had greater wear resistance. This was the case because the bushings would act as a bearing which protected the pin. From here, the story of the chain fast forwarded to what we know today. Steel bushing chains were being used on bikes, a chain was used as the propeller drive in the airplane built by the Wright brothers and they were in the rear wheel drive of early cars.

The chain tattoo is a very symbolic tattoo and depending on how it is depicted in the tattoo will tell the story of the meaning to that person. In most cases, the chain is a way to represent a lack of freedom or symbol for bondage. This is probably why you see a lot of chain tattoos on people that are in jail or locked up in prison. It is a way to let people know that they are being held against their will. In the same way, you will see a chain connecting handcuffs which is just another way to reinforce the idea of being held against your will.

However, the chain tattoo isn’t always a negative. There are some variations of the chain tattoo that represent more of a positive meaning. Below are a few examples of different chain tattoos that we thought might change your idea of how chains symbolize being prisoner in some sense. We understand there are plenty of other examples, but these are just few we wanted to share.

The bicycle chain tattoo is usually worn by somebody is a big fan of riding their bike. It’s usually pretty self-explanatory. We see a lot of these tattoos on bike messengers and those that race bikes. It’s a cool way to let everyone around know what you are passionate about.

The chain and locket tattoo is a way to represent anything you want. The chain is holding the locket that is tattooed and within this locket might be anything. The locket could be in the shape of anything. It might contain a photo of a loved one or a symbol that is important to you.

You can go in a lot of different directions when getting your chain tattoo. If you know you want a chain tattoo but aren’t sure about the details, sit down with your tattoo artist. They should be able to help guide you through the process and draw up some cool ideas.