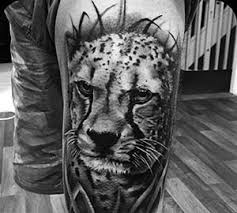 As many of us know, the cheetah is the fastest animal on land. This says a lot about this feline considering how few of them are left in the world. Mainly found throughout Africa and some parts of Iran, the cheetah has been in a rough decline as far as their population. Mainly, humans are the reason for the loss of such an incredible animal due to poaching and the destruction of their natural habitats. Cheetah reach up to an average weight of around 160 pounds, larger than the leopard, yet smaller than a lion, cheetah possess an incredible amount of strength for their size. Being natural born killers, cheetah hunt their prey during the day time, feasting on mostly gazelle and antelopes. Reaching up to a little over 45 miles per hour in full sprint, hunting for meals is no problem for the cheetah.

Oftentimes, people confuse the cheetah and leopard with one another. Although they are very similar in looks, the look of the cheetah is a little different. Cheetah tend to be taller than leopard but sometimes even that is hard to distinguish. The most easy way to tell the difference between the two is the spots on the animals. Leopards have what are called ‘rosettes’ which consists of clusters of brown and black spots, the leopard also has a much more complex coloration scheme. Another way to tell the difference is that cheetah have black lines that run down from under their eyes. This black strip is used to help the cheetah keep the sun out of its eyes.

These are all great things to keep in mind if you plan on getting a cheetah inspired tattoo. The most important thing to remember is the difference between the two feline cousins. Having a tattoo of a leopard but calling it a cheetah could make you look foolish, so it is important to remember the difference. Down below are examples of the cheetah tattoo; different designs, styles, and placements.

When it comes to tattoos, everybody has a different reason for getting them. Not only can an image mean a million words to someone, the reason in which they get the particular tattoo may be different from the next person who has a tattoo of the same nature. The symbolism behind tattoos is something tattoo enthusiasts hold dear to them. It is a reminder to themselves of who they are. Even though we may all have our own meanings to whatever tattoo it is that we get, there is a certain amount of symbolism that an image can portray, especially if that image is going to be inked on you for your entire life. So before you get the cheetah tattoo, check below what symbolism and meanings this beautiful creature depicts to us humans.

Since the cheetah is known mainly for its incredible talent of being the fastest land animal in the entire world, when people see the image of a cheetah that is usually their first thought. If you are a runner, or even credit yourself on how fast you are, the cheetah may just be your spirit animal. A graphic of a cheetah in action, running at full speed to chase down its prey reflects not only the quickness of the cheetah, but its integrity to stay alive.

Although the cheetah is not the largest feline, it is still a very powerful animal. Being the fastest land animal, it is obvious that this big cat has strong legs and a muscular build. As it stalks its prey during the day, then sprinting toward them to speeds up to 40 miles per hour, the cheetah attacks the gazelle and antelope, providing itself with food for the evening. Cheetah are natural born predators with a slick and sneaky approach. A tattoo such as a cheetah could also signify that you are a strong and powerful person with a stealthy way of going about your business.

The first thing you should establish before you go to the tattoo shop for your new piece is what exactly you will be getting. There are many ways to represent your cheetah tattoo, depending on how large you want it however will determine where it will be displayed. Down below are examples of what you can get for your cheetah tattoo.

If you want a cheetah tattoo but do not want the entire body of the cheetah with it, getting the face of a cheetah is a popular idea. Since the cheetah is a very unique feline, it has certain markings on itself that distinguishes it from other animals that may look like them, like leopards for example. Because the cheetah has two black lines that go down from its eyes, this is very important to have within the detail of the tattoo. Even though the lines below the eyes are there for the cheetah to be able to block the sun out, there is an ancient symbolism behind them. It is said that the black lines are under the eyes to represent the tears the cheetah may cry since many cheetah do not live to see adulthood. The face of the cheetah like many animal face tattoos can be displayed just about anywhere. A common place for someone to get this would be on the arm or even on the chest.

Instead of getting the cheetah as a whole, a very popular tattoo idea is to get the markings in which the cheetah have. The spots on a cheetah can be irregular and different sizes and shapes. If you have decided on getting cheetah print for a tattoo instead of the cheetah image itself, you may want to keep a few things in mind. It is a safe idea to once again not get the prints of a cheetah and a leopard confused with each other. They are very similar, however, the leopard has more of a collaboration of dark brown and black spots sort of clustered together, whereas the cheetah has more of just black spots. This is a crucial point to have in mind when getting this tattoo. A great place for the cheetah print is around the shoulders, others may even get it on their upper arms as well.