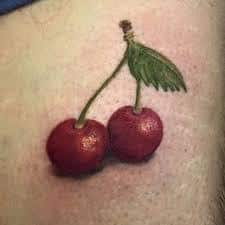 There are many types of fruit on this planet and like flowers, most of have some sort of symbolism behind the image of that fruit. We even see people get tattoos of their favorite fruit. The nice thing about getting a tattoo of a piece of fruit is that most people will not know what it means to you, so this can either lead to some fun conversations or they’ll think you are just a fan of fruit. In this case, we are going to be talking about the cherry tattoo.

Of all the fruit in the world, the cherry seems to have the most symbolism behind its image. It can range from sexuality to codes in the samurai’s life. This fruit is a simple looking one, but it has a great deal of meaning for the people with the tattoo. It also ranges based on the culture and the country in which we are talking about.

Most of the symbolism behind the cherry tattoo comes from the cherry tree itself. The general nature of the cherry tree revolves around revival and new beginnings. Every spring the cherry tree blossoms and releases its sweet smell. However, the flowers on the cherry tree are short-lived and represent the shortness of life. We should value each and every moment we have on this earth. The cherry tree tattoo symbolizes this zest for life and to no wait around for life to come to you.

In summary, we can say the cherry and cherry tree symbolize a zest for life. Immortality of the soul and quick lives. So, live it to the fullest and rock your cherry tattoo like there will be no tomorrow.

The cherry tree tattoo is one that we see periodically and as said above, it symbolizes new beginnings and rebirth. However, like the flower of the cherry tree, life is short, so you have to grab life by the horns and attack it with a ferocity unlike anything you can imagine. Those with the cherry tree tattoo are aware of this and live life as best they can.

Most tattoos of cherries will have them as a pair and they grow like this for the most part. For the most anatomically correct version of the cherry, the pair of cherries tattoo is your best bet. The cherry tattoo represents the juice of everlasting immortality and is linked to the cherry tree in the way of rebirth.

Cherries have been enjoyed by people all over the world for many years. Archaeologists say that we’ve been eating them since the stoned ages. Fossilized cherries in Asia and Europe have been found in prehistoric caves and they had even been written about by Theophrastus. In his book, History of Plants, cherries were mentioned along with many other fruit and cataloged in this work. This happened at around 300 BCE and at the same time, the Greek author Diphilus of Siphnos wrote that cherries were used as a diuretic.

The Romans were also well known for eating cherries. This is especially true for Roman soldiers. They would throw the seeds of the cherries they were eating on the ground and over time, cherry trees sprouted up all over the empire. There was a Roman saying that to find the Roman roads, on must follow the wild cherry trees.

Americans didn’t see the cherries that we know today until the 1600s. When the Europeans arrived in America with the cherries that we do know of, there were already a few varieties present. The kind of cherry already found in America included chokecherries and black cherries. Across the Great Plains, chokecherries were commonly eaten, and they were used as an ingredient in pemmican (a paste made of meat, fats and other ingredients).

At this point, there are over 1000 varieties of cherries. From Royal Anns and Lamberts to Rainers and Lapins, there are over 500 kinds of sweet cherries. There are also about that many versions of the sour cherries. However, in commercial production, only about 20 percent of those are used.

Whatever you decide is the best version of the cherry tattoo for you, make sure you take your time in finding an artist. Have a consultation with the prospective artist and make sure you feel comfortable. After you’ve sorted that out, enjoy the process and your new tattoo.