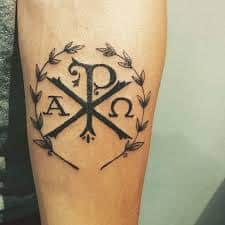 The Chi Rho tattoo is one of religious importance to the people wearing it. It’s identified as one of the earliest kinds of chrisotgrams. It is formed by superimposing the capital letters for chi and rho which are the first two letter of the ΧΡΙΣΤΟΣ. This word means Christos. This is going to look like ‘X’ and ‘P’ respectively.

The Roman emperor Constantine I used this symbol as part of a vexillum or military standard. His standard, specifically, was called the Labarum.

Before Christian times, the Chi Rho symbol was used to notate an important section of a passage in the page margin and was known to be a symbol of good fortune for the pagan Greeks. Some coins were also marked with this symbol as well.

The Chi Rho symbol clearly has spiritual relevance for Christians, so we can understand why this would be a popular tattoo. While most people donning a tattoo representing Christianity might go with the peace fish or a cross, the Chi Rho tattoo has just as much a connection as any symbol.

History of the Chi Rho Symbol

Emperor Constantine I had a dream where he was told he needed to add a “heavenly divine symbol” to the shields of his soldiers. This fact came from the tutor of Constantine’s son, Lactantius. Lactantius was a North African Latin historian that was brought out of poverty Constantine. The morning after the symbol was chosen, Constantine’s army faced the army of Maxentius in the Battle of the Milvian Bridge of 312.

To be more specific about what happened, Eusebius wrote a memoir of Constantine after his death. It was called On the Life of Constantine. In this, Eusebius wrote that long before the battle of the Milvian Bridge, Constantine and his army saw a sign in Gaul. What he saw would change the course of his time as emperor. Constantine had been pondering what happened to commanders before him that praised multiple gods and their misfortune on the battle field. He then decided he would direct his focus and prayers toward one god, the almighty God. It was at noon that Constantine noticed the sun with a cross imposed over it. In that cross Constantine and his army saw the Greek characters, “Τούτῳ Νίκα!”. This means “In this sign you will conquer!”. After Constantine had laid down to rest that night, he had a dream. In this dream, Christ appeared and told Constantine to create a copy of the sign he saw in the sun on the prior day and this would work as a defense for him and his army.

Eusebius claims Constantine swore under oath this story was true. Of course, this was later in life when Eusebius was worthy enough to be in the presence of the emperor.

Historians have debated the accuracy of this story. It seems the only person around when this recollection was told was Constantine himself and Eusebius. However the story unfolded, the symbol of the Chi Rho has become of the more popular religious symbols around and was extremely popular during the Roman Empire. The logo has been found on old helmets from the Roman times as well.

We’ve seen the Chi Rho tattoo inked in different ways. Depending on how someone would like to show their faith, these tattoos fit nicely on most parts of the body. The iconic symbol can also be modified in many ways. For example, the Chi Rho tattoo can be inked with the Alpha and Omega. This would signify the idea of eternity or the importance of Christianity to the canvas. These characters have actually been found together in many Roman tombs.

The Chi Rho tattoo has been incorporated with an anchor on many occasions. When these two logos are combined, they form a sort of protection on the water. You might see sailors wearing this combination of logos or just your common fisherman. Giving the person tattooed protection while on the water.

We’ve also seen the Chi Rho tattoo placed between the laurel wreath. This is most likely related to when Constantine would go into battle because the laurel wreath symbolizes victory and honor. You may see soldiers donning this tattoo if they have a Christian background.

Another way we’ve seen the Chi Rho tattoo used is with arrows replacing the “X”. This could also be for many reasons. Arrows can be a symbol of war or even just hunting in nature. I think the over idea with this combination is for protection from God when out hunting or in battle.

As far as choices go when getting your Chi Rho tattoo, there are many options and personal twists you can put on your tattoo. We’ve seen these tattoos as simple as the logo in a black and grey shade. We have also seen these tattoos as bright and vibrant as you can imagine by using watercolor styles.
Just because the Chi Rho symbol was discovered back in Roman times doesn’t mean you have to follow those simple rules when getting this tattooed on your skin. Be creative and have fun when you are getting this beautiful symbol of Christianity.

We understand deciding on a tattoo is not an easy task. By coming to this page, you are a step closer to getting the tattoo you’ve been dreaming about. We hope that by you reading this post you will have a better understanding about what the Chi Rho symbol represents and why it might or might not be the best tattoo for you. What we do know is that whether you like it for it’s Christian symbolism or you just like the way it looks, it’s going to be a nice tattoo on you for many years.

Take a look at the pictures below to help you gather some ideas on the kind style of Chi Rho tattoo you would like. If you you’re still have trouble deciding on a style or an artist, please reach out to us. We love helping our visitors find the tattoo artist of their dreams.