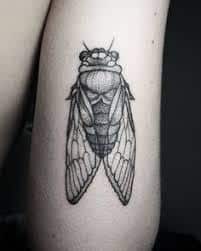 Native to North America, the cicada is an interesting insect with a lot of symbolism. If you close your eyes and listen on a warm night, you might hear the humming of the cicadas. The sound can be almost overpowering as hundreds of cicadas sing their mating songs.

You might recognize the cicada, or it’s exoskeleton, stuck to the tree bark. I know growing up, I had never seen a live cicada. I had only seen the shells attached to the trees and wondered about these fascinating insects.

They start as eggs being planted in the bark of a twig. When the eggs hatch, the nymphs fall to the ground where they burrow up to 8 feet underground for most of their life. While underground, they feed on the sap of the tree they have burrowed under. Larger species of cicadas will create mud towers above ground to allow airflow into their burrow. In the final stages of the cicada’s youth, they will burrow out of the ground and molt and leave the shell we are used to seeing on the tree.

Cicadas generally live to about five years. However, some species in North America live for up to 17 years. This is pretty uncommon in insects, but they think the cicada’s long life cycle was in direct response to predators.

One fun fact about cicadas is that they were eaten in Ancient Greece. They are still eaten today in Burma, Malaysia, Latin America, China and Central Africa. There was actually a case in the Missouri, United States where an owner of an ice cream shop incorporated cicadas into a batch. It was the only batch they would make because the Department of Public Health said they couldn’t do it anymore.

In addition, to being eaten, they are used in traditional Chinese medicines. How they would do it is by using the shells of the cicadas.

We’ve heard many people say they received a cicada tattoo to remind them of the concept of time. The reason behind this is because the cicada is able to predict the best time to burrow out of the ground to produce the most offspring. This phenomenon is still a mystery to biologists, but they happen to reproduce when the least predators are around. Part of this is their long life cycle. Most of their predators only live for a couple years so they might pick a time to reproduce when their predators are in their infancy.

To elaborate on the timing symbolism, one might look to the cicada tattoo as a reminder to think about the timing of events in your life. Is this the right time to start a new job? Should I invest in this stock or sell? The symbol will not give you the answer, but it might make you more aware of the situation.

Another reason someone might get the cicada tattoo is to represent change or rebirth. Because the cicada sheds its youthful shell for it’s adult form, it can be said the cicada has been reborn. The process is interesting because the shell of the insect is in perfect shape when they leave it. This might represent leaving behind the person you were and becoming the person you want to be. It might also represent growing into an adult and leaving your childhood behind. The next step in life is to rid yourself of old habits and tendencies. The earthen womb the cicada spends most of its life in is considered to be the place where the cicada forms into the creature it will become. You could say human beings grow through childhood as well and the journey to adulthood.

In addition, a cicada still underground could be considered a sign of the past and when it emerges, the future has arrived. So, the person with the cicada tattoo is might be using this to represent moving forward in life and leaving the past behind him.

The cicada tattoo can represent our connection with the sun. Cicadas love the heat and sometimes it seems the warmer the weather is, the louder the cicadas. The sun represents illumination, outward expression, happiness and nourishment to name a few traits. The cicada could be a direct expression of these traits or it might be reminder to think about how we express ourselves to the outside world. As the sun is in an outward expression, so are our words. The cicada tattoo can be a reminder to look inward and think about how you are coming off to others.

One trait of the cicada that not many will think about is the representation of seduction and sexuality. What makes the cicada most well known is their mating song. It can be heard for miles and if you are holding a male cicada up close, their song can be so loud it is painful. Being the characteristic that most people would recognize when talking about cicadas, we cannot ignore the fact that this is a mating call. Someone with a cicada tattoo might get this to represent sensuality or romance. The male sings until a mate shows up. It’s quite the display of romance on the part of the male and you might want to represent that with a tattoo.

One thing to remember about the cicada tattoo as is the case with any tattoo, meanings and symbols are created over time through culture, context and mass opinion. The great thing about any tattoo is that nobody can tell you what it means. This is always up to the person that has the tattoo.

If you have any questions about what artist to go to or tattoos you might want to get, let us know. We would love to help you in your journey.