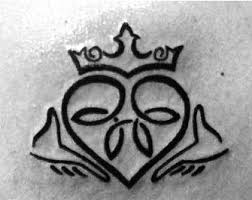 The Claddagh tattoo is one of importance for those of Irish heritage. You might see this symbol incorporated with other Irish symbols or standing along as a tattoo on one’s chest or back. For those of Irish decent, this symbol goes way back. To understand about the symbol, we must learn about where it came from. Most would guess Ireland and they might be right. We’re going to go through some of the history behind this historic symbol and talk about why the Claddagh tattoo is such a popular one these days.

The Claddagh tattoo started with the city of Galway. In Irish, it’s spelled Cladach which means “the shore”, but I digress. Claddagh can be found where Galway Bay meets the River Corrib. Prior to being what it is today, Claddagh was a fishing village. This was an important area on the west coast of Ireland. Until the end of the 19th century, the fish caught in Claddagh were sold across the river at the Spanish Arch.

As famous as Claddagh was for being a fishing village, they are internationally known for the Claddagh ring. The Claddagh ring was used as both a wedding and friendship ring by those of Irish decent. The symbol on the ring looks like two hands clasping a heart in which a crown sits on top.

There are some thoughts the Irish weren’t the first to use this symbol as it is possible that when the British Isles were invaded by Romans, they brought rings with this design. It could have just symbolized what the current day Claddagh ring looks like. However, the Irish were fantastic silversmiths and goldsmiths which tells me they probably didn’t follow in anybody’s footsteps when creating this symbol of love, friendship and loyalty.

Legend of the Claddagh Ring

Legend has it, a young man who happened to be a fisherman in Claddagh was at sea with other family members fishing as they did to earn money and food. Back then, the sea was dangerous. The tides might be high, and the currents might be strong but what was most feared in these times were pirates. Just so happens, the men spot a Spanish pirate ship and assumed the worst which is what happened. The men were captured by pirates and taken to the North Coast of Africa where they were sold into slavery. The men were distraught as they had left behind wives and children, but one man named Richard was especially heartbroken as he had recently met the love of his life.

As the years passed, the thought of returning to his beloved is the only thing that kept Richard going. Men that were captured with him had died after many years. Over the years, Richard would collect flakes of gold as he was a slave of a goldsmith. Many more years had passed. Nobody knows if Richard escaped or was released but he had saved a nice little chunk of gold. When Richard returned, he found his beloved had waited the entire time. She believed that one day he would return. Her wish came true and Richard used the gold that he collected over the years to make what is now known as the Claddagh ring, and gave it to his love.

The Claddagh tattoo symbolizes the same values the ring does. Love, honor, and loyalty are some of the main attributes this symbol has to offer. The crown of the symbol represents loyalty while the heart is indicative of love.

On many occasions, you will see the Claddagh incorporated with a Celtic cross. The Celtic cross has long been a symbol in Irish culture with a great deal of meaning. It symbolizes the mystical and at the same time, it is a symbol of God’s love. It could be said the four directions of the cross represent the four corners of the earth or the four major elements of nature.

That being said, the Claddagh symbol incorporated with a Celtic cross is strong symbol flush with love and magic.

Another way you may see the Claddagh tattoo is being incorporated with the Triquetra. The Triquetra is also a strong religious symbol in Irish lore. It represents the three forces in the Holy Trinity. The Holy Trinity includes the Father, the Son and the Holy spirit. When the Claddagh is used in conjunction with the Triquetra, it might be a symbol of their religious conviction. Their love and loyalty to God might be the message being portrayed in this case.

The Claddagh tattoo has a great deal of meaning to the people of Ireland and because of its interesting design and history, people all over the world have adopted this symbol into their lives. The positive messages coming from the Claddagh tattoo make it a favorite with many tattoo enthusiasts.

We hope that by reading this post, you have a better idea of what the Claddagh tattoo represents. Not only is it a cool looking tattoo, but it has such a rich history and positive message. If you are looking to get a Claddagh tattoo, we would love to help you find the artist that will to the best job. Many artists have an affinity to Irish symbolism so let us know if we can help you find one.