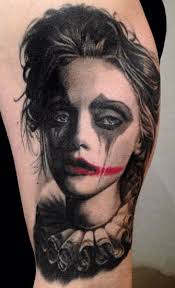 There are a lot of images and subjects out there that can simultaneously inspire both fear and happiness depending on the person you ask. For example, some people love snakes while others are deathly afraid of them. Spiders are the same way. Some people keep them as pets and others won’t go within 50 feet of one. There are a lot of examples of this but one thing that stands out to us something that invokes fear in one breath and happiness in the other is the clown.

The clown has long inspired fear and happiness and some people, regardless of how they feel about clowns, choose to encapsulate them in a tattoo on their body for many years. Clowns are fascinating and they have a very interesting history in our world. They have had a history of being terrifying but also inspiring fun and happiness. This is what makes the clown tattoo so unique. You can take this tattoo in any direction you feel.

In this post we are going to talk about the clown tattoo meaning and what it symbolizes for that that decide to have the image tattooed on their body. We will also address the history of the clown and talk about how it got the reputation that it did. By the end of this post, we hope you get your fill on the clown tattoo meaning information and have a better understanding of the history of the clown itself.

The image of clowns invokes the concepts of fear and horror in many, just as it brings the feeling of joy and fond memories in others. Clowns are a symbol recognizable all over the globe and often bring to mind the circus in its many forms throughout the years, although they are often imaged alone when rendered as a tattoo design. Clown images generally break down into three subgenres and are often taken from television, film, and literature. The most popular is the scary clown taken from horror that seeks to disturb and frighten, like Stephen King’s It. The sad clown is another contrary image, taking what was meant to bring happiness and presenting it as unhappy. The last is the more traditional laughing clown that performs in the circus and children’s birthday parties, bringing balloons and joy. All three concepts are a symbol of projection and façade, considering the person beneath the face paint and costume. The clown is a representation of the performer hidden beneath, whether positive or negative.

The frightening clown is a juxtaposition of childhood innocence and death and violence. This disturbing image wears a menacing smile, meant to terrorize, often showing jagged teeth and red, glowing eyes. Done either in greyscale or vivid color, the clown is best done as a portrait with realistic aspects to showcase the horror of the murderous character.

The sad clown represents a melancholic reality hidden underneath the happy façade that society expects from a clown. This can be a symbol of depression and tragedy, stemming from the origins of pantomime, from which the modern clown is derived. The unhappy expression is sometimes paired with a laughing or smiling clown, an homage to the theatre of ancient Greece. “Weary Willie” is another recognizable early 19th century clown figure who came to represent the Great Depression and times of great difficulty.

Lastly, the laughing clown is a symbol of childhood memories and happiness. It emphasizes an affiliation with performance as well as comedy. It often used as a specific reference to television and the origins of the circus and circus performers like Charlie Cairoli, who sparked the traditional clown culture.

We’ve seen clowns our whole lives but how many times have you questions where they came from? Over the course of history, there have been both men and women that have had the ability to make people laugh. Unfortunately, people didn’t keep records outside of great battles and scholars so information about clowns was hard to come by. However, there were clowns back then and even though they weren’t known as that, they existed.

Back in Ancient Egypt, African Pygmies were used in the courts to entertain the Royals Families and Pharaohs. They would dress in strange outfits and leopard skins while dancing and impersonating ancient Gods like Bes.

The Zhoe Dynasty of China has clowns attached to the Imperial Court. This goes all the way back to 1046 BC. One was said to have been close to Ch’in Shih Huang-Ti, who built the great wall and his name was Yu Sze.

There were also clowns in Ancient Greece and they wore very short tunics and were over stuffed in the front and back for comedic purposes. They even had artificial penises strapped to the front of them for the entertainment of all around.

In Ancient Rome, there were many types of clowns for the amusement of the wealthy. One type was known as Sannio. This type of clown was a sort of mime that entertained people by making funny faces and shapes with their bodies. This clown, unlike most at the time, did not wear a mask. Stupidus was another clown of the time and you can gather by the name that his actions were quite foolish and would make others laugh. This clown generally wore a big, long pointed hat that was multicolored along with the rest of the outfit as well as being bald headed. He was well known for mimicking famous actors and using riddles and innuendo to entertain.

However, clowns started getting a reputation for being evil and scary and if you are like us, you are probably wondering how it went from happiness and entertainment to evil and scary. There were studies done that said very few children are fans of clowns because they are from a different era and they look odd and maybe they always have been odd.

If you refer to what we were talking about above, royalty tended to choose people that were odd looking or acting in some way to entertain everyone. Harlequins, jesters, pranksters and clowns have always been around and they were chosen for their odd ways. They also tended to have a dark side as well.

These were characters that were reflections of the funhouse mirrors in society. Scholars note that the comedy performed by these clowns were derived from their appetites for drink, sex, food and their behavior that tended to be manic. In some ways, the clown has always been a strange spirit. They grew up being the butt of the joke and like many comedians today, draw their comedy from tragedy.

There are many stories telling the growth of the mischievousness of clowns to downright murderous. One story is of a French clown named Jean-Gaspard Deburau’s Pierrot. This clown had a white face with red lips and worked the streets of Paris. Deburau killed a young boy in 1836 by striking him with a walking stick when the boy made fun of him.

There is also the case of John Wayne Gacy who worked as a clown named Pogo. He is well known for murdering at least 33 boys between the years of 1972 and 1978 in Chicago, IL. With clowns like these running around, it is no wonder they got a bad name.

There are all types of variations of clown tattoos that you can get and they will mean whatever you think they should mean. If you are a fan of the happy connotations of the clown and the joy that it brought people, you might choose to take a more pleasant route with your clown tattoo while other that enjoy the darker side of things might choose a more sinister tattoo.

Whatever you choose, make sure you pick an artist you are happy with because you will potentially have this tattoo for the rest of your life.