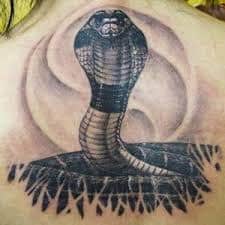 The cobra is a universally known animal that induces feeling of uncertainty and fear. The vision of seeing the cobra standing at attention with it’s hood open is something that nightmares are made of. However, this has never stopped anyone from getting a cobra tattoo and trying to invoke some of the powerful traits this animal symbolizes.

This serpent is known to be one of the most dangerous in the snake family. The cobra has long been a symbol of leaders and spiritual types. It is the type of animal that is such a strong symbol that many cultures use it for different reason.

With it’s intimidating upright posture and threatening hood, the cobra is one of the most recognizable snake in the world. They are a prideful and elegant animal and with their venomous bite, they’ve earned the respect and fear of almost everything on this planet.

Cobras inhabit most of Africa, the Middle East, Indonesia, Southeast Asia and India. The word cobra comes from the Portuguese word ‘cobra de capello’ which translates to “hooded snake.”

There is still some debate on what a cobra is exactly. Depending on how it is defined, there are between 28 and 270 cobra species. True cobras are part of the Naja genus but the name ‘cobra’ refers to many different species of snake and most of these are venomous members of the Elapidae family. Other snakes in this family include mambas, coral snakes and kraits. These snakes either have the ability stand at attention or have a hood.

Characteristics of the Cobra

The cobra is a poisonous snake with fangs that are fixed to the top of its mouth. Because these snakes aren’t able to hold their prey down with their fangs, they inject venom through the fangs. Their sense of smell is uncanny as well as their night vision.

The colors of the cobra vary. There are black, yellow, mottled, banded and red colored cobras to name a few.

They are quite large when compared to other snakes. Many cobras can reach up to 6 feet long. The largest cobra is recorded as being 10 feet long and it is the forest cobra. Then you have the Ashe’s spitting cobra which reaches up to 9 feet and making it the largest spitting cobra species. The smallest cobra is 4 feet in length and is called the Mozambique spitting cobra.

The cobra tattoo symbolizes much of what the cobra itself symbolizes. First, the cobra represents speed and grace as it is a cunning hunter and when it needs to, can reach high speeds.

The cobra tattoo is a common one because of the imagery of the cobra. This animal has many positive traits that are thought of when getting the cobra tattoo. The cobra tattoo might symbolize wisdom, strength, protection, unpredictability, intuitiveness and sometimes it represents evil ways.

In Thailand, one can get a cobra tattoos in a tattooing festival that will protect from evil spirits. These will be tattooed by monks. In Southeast Asia, the cobra is a symbol of fertility and is also known as a messenger of the gods.

In ancient Egypt, the cobra was a royal symbol. You would even see the cobra on the crowns of pharaohs. Those were called uraeus. This is a female cobra and its job was to keep enemies from the Pharaoh. The cobra followed the Pharaoh into death as well. You might even see mummified cobras in the tombs of these pharaohs.

You will see tomb funerary art depicting the rearing cobra with his hood spread in Egypt. This snake can be found all over Egypt including being worn as jeweler, being carved into furniture’s and as decoration. The cobra was a symbol of protection to ancient Egyptians.

The cobra (or Naga) are sacred in India and are also sacred in Buddhism and Hinduism. Cobras are part of the sacred rites and the Hindus say that Shiva, the God of Destruction, is alive in the cobra. In addition to Shiva, Vishnu is on top of the thousand head serpent and this represents eternity. People of the Hindu religion believe the cobra represents immortality as it sheds its skin and renews its skin.

In Buddhism, it is said that Buddha was protected by a giant cobra from the rain and sun while he slept. It is said the marks on the cobra’s hood are supposed to be Buddha’s fingerprints and are shaped like glasses.

When deciding on your cobra tattoo, there are a plethora of different variations you can choose from. Combining the cobra with other symbols can also change the meaning of the tattoo. The cobra can symbolize the darker parts of life but when paired with the dragon, for example, the cobra is the witty and thoughtful symbol while the dragon is the unpredictable one.

Just make sure you research what you want and when you figure that out, find an artist that does work in the style you are looking for. It pays to do the research rather that just popping in and getting a tattoo you aren’t please with. If you need help finding an artist, reach out to us and we would be happy to help.