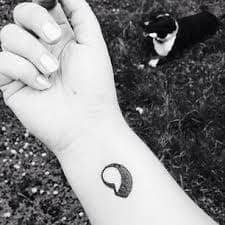 When looking for a tattoo with meaning, there are plenty of options to choose from. With the internet and so many people getting tattooed, there are almost too many to choose from. Animal tattoos have a great deal of meaning. From birds to lions to fish, the symbolism is endless. You’ve also got many objects that have meaning. You could probably look around your house and see 30 things that will have a symbolic meaning to someone in the world. The question arises. How do you choose? Most of the decisions you make in regard to getting a tattoo will be on how you feel at that time. Everything has meaning so if you can find a tattoo that will remind of a way to be or to calm your nerves if you get worked up, you might have made the right choice.

You might even be the kind of person that isn’t flashy, but you still want a tattoo. In this case you need to find something simple with a strong message. One popular tattoo style we tend to see these days are the punctuation tattoos. Punctuation tattoos are huge these days, and the comma tattoo is just one of many that people choose to get. The comma is usually small, so it can be placed pretty much anywhere on the body, and it can hold a number of different meanings. Obviously, the comma tattoo could be part of a larger text tattoo, but in those cases the comma doesn’t hold much meaning.

In this post we are going to talk about what the comma means in today’s society. It isn’t just the marking that is used in your English grammar class, there is a lot more behind this tiny image and we are going to talk about it. We will discuss the symbolism behind the comma tattoo and talk about what it means for the people wearing it and why they might have this tattoo. We will also talk about some of the variations we have seen and what they mean. You should feel pretty informed on the comma tattoo by the time you are done going through this.

The fact that the comma tattoo meaning isn’t clear is a meaning all its own. It gives an air of mystery to its owner, which is sometimes the effect that they want to give off. It’s the type of tattoo that pretty much forces people to ask about, which could be what the owner is going for. This isn’t the type of tattoo that people regret getting even if the “mysterious” meaning wears off at some point.

Commas separate two parts of a sentence, so a comma tattoo could imply that the owner has separated from someone or some other type of separation has affected their lives. Since most comma tattoos are smaller, it can be placed inside of other tattoos to keep the “separation” meaning a bit more private to the owner.

There are a ton of tattoo designs that convey that the owner is an avid reader, but the comma tattoo is shooting up the ranks. Some people don’t want huge tattoos, so the comma is perfect for them when they want to get something inconspicuous yet meaningful. Even book lovers who thought that they’d never get a tattoo might be too tempted by the comma to pass it up.

Similarly, the comma tattoo could be there to show that the owner has a love for writing. It could be a great tattoo for novelists, songwriters, poets, or any other type of writer. Commas might just be small punctuation marks to most people, but they hold plenty of meaning for people who use them professionally.

The comma tattoo can also mean “waiting” in more ways than one. For instance, it could mean that someone is waiting to do something significant in their lives or for someone to come into their lives. It could mean “waiting” in a less meaningful way in that they are waiting to add more words around the comma tattoo. It’s one of those rare tattoos that is meaningful even when it doesn’t have a meaning attached to it yet.

Like you have seen above, the idea of the comma has some symbolism that is common across all comma tattoos. On the other hand, this doesn’t mean you can’t make the comma tattoo your own. This is the best thing about getting a tattoo. You can take any image you want and make it your own and below are a few ways that people have used the comma in tattoos.

The comma is also used as part of the very popular semicolon tattoo. These tattoos are extremely meaningful and have nothing to do with grammar. When someone struggles with depression, addiction, or some other form of mental illness, the semicolon tattoo is there to remind them that they will get past those hurdles and to not give up.

This isn’t always an easy concept to remember for those dealing with suicidal tendencies or depression. Those that are dealing with these problems know how hard it can be to just keep moving on. It seems that there is nothing to look forward to or that the world would be better off without you. However, if we are thinking logically, we know this isn’t true. Sometimes we just need a reminder and the semicolon tattoo is there as that everyday reminder to just keep moving forward and that your story will continue. It might just be the push you need.

The comma with the heart tattoo is a reminder to keep loving yourself through the process. It is tough to keep moving forward and like the comma tattoo says, your story hasn’t ended yet. So, from talking to those with this variation of the tattoo, the message is simple. It is to remember to love yourself and to be easy on yourself. We are always so tough on ourselves. A thousand times tougher than anyone else would be. Sometimes you need that reminder to go easy on yourself because the world is hard enough. You don’t need your own negative thoughts bringing you down too.

This might be an image that could be startling to some but sometimes people need the reminder of the road these negative thoughts are heading down. We don’t all do well with subtle reminders and happy thoughts. Sometimes we need to scare ourselves a little and there isn’t an image more associated with the death than the skull. Not only does it serve as a jarring reminder, but it also looks pretty bad ass too. After all, we also get tattoos because they look cool and this is no exception.

The comma with the EKG reading tattoo is just another way of symbolizing the life ahead. The reading is of a heart beat that hasn’t stopped yet and if it’s up to the symbolism in this tattoo, it isn’t going to end anytime soon. This tattoo also looks cool because simple lines can be some of the best looking tattoos. In the case of the person that gets this tattoo, they don’t need something big to send the message, just something clean and classic looking.

Those are just some of the most popular comma tattoo meanings. The comma might not be the most popular of all of the punctuation tattoos out there, but as you can see there are plenty of great meanings that owners can give to their commas.

So, when you go looking for an artist to handle your tattoo, make sure you sit down and get to know them. There are no binding contracts in the tattoo world so if you don’t feel good about the artist you sat down with, move on to the next. We can also help you find an artist that will suit you if you reach out so let us know if you want some help.