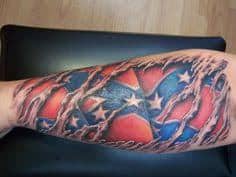 There is probably not a more controversial symbol than the Confederate flag tattoo or “Rebel flag”, as some call it. This tattoo has been being worn by men and women alike as a symbol of southern pride. This flag has been in the center of controversy for over a century and it makes sense. The Confederate flag has long been associated with the south and slavery, but it isn’t necessarily the whole truth when talking about this symbol of southern pride. In this article, we will discuss the meaning of the Confederate flag tattoo and the different meanings behind it.

We know The Battle Flag of the Confederacy is probably one of the most controversial symbol out there. This flag is criticized and loved, shamed and praised, but it is a large part of the history of the United States and its not a surprise that many would want to have this tattooed onto their person.

During the debates in South Carolina back when Barack Obama was a Senator, he was asked where he thought the appropriate place for this flag was. He responded, “In a museum”. This was a strong stance and we commend him for saying this. However, the Confederate flag we all think of was actually not the flag of the Confederate States of America. That flag was called the Stars and Bars.

The issue with this argument (and with almost any stance that people hold on this subject) is that it is impossible to say what a symbol means when adequately large groups of people can’t agree on what the symbol means. If someone flew a Nazi symbol over their home and claimed it meant good fortune to them, those folks would be run out of town. It would not matter what those people thought the symbol represented, because almost everyone else feels the symbol holds a different meaning.

On the other hand, there is no national consensus on what the Confederate Battle Flag means, and its history is complicated enough that I don’t think any one explanation can be called the “right” one.

Racism and slavery were not the main topics during the American Civil War, but the similarities between racism and the Confederate Battle Flag is still a real concern when you consider the groups that have used this flag as a symbol of racism since then. People that fly this flag aren’t necessarily racist, but it cannot be denied that there are racists who have flown this flag in the past. So, it is not so far fetched that this flag is associated with racism

In the same way, the large number of folks who see the Confederate flag as representing nothing more than an appropriate balance between national and state establishments (and who see the balance not being upheld by the federal government) are being truthful when they say they are loyal to the United States. The country associated with that flag hasn’t been in existence for 142 years, the people who raise the Confederate flag now say that the flag has a different meaning.

The beautiful thing about this country is we have the right to free speech and to represent whoever we want. You will see many Confederate flag tattoos out there and there is some beautiful work to behold when seeing these tattoos. As is the case with any tattoo, the artist will make or break it. There are many ways they can represent this symbol in a tattoo.

One way we’ve seen the Confederate flag tattooed on a person is the torn skin tattoo. In this tattoo, it looks as if the person’s skin is being torn apart and under it is the Confederate flag. This would symbolize the person wearing this tattoo is made of the flag. This person most likely has deep roots in the South and is proud to let others know about it. When done well, the torn skin style of tattoo is really a thing to be seen.

Another way we see this tattoo is with skulls of deer or antlers. Hunting is a major hobby for many in the United States and especially in the South. You might see the Browning symbol in a Confederate flag or guns and deer surrounding the Confederate flag tattoo. These two seem to go hand-in-hand.

We understand the subject of the Confederate flag is a touchy subject. It holds certain meanings to different people, but it doesn’t mean people don’t have the right to get the Confederate flag tattooed on their body. As we said in the above article, this flag carries a sense of southern pride for many that wear it and we wanted to try to explain the symbolism behind it for those thinking about this historic symbol. We hope that after reading this, you will have a better understanding of the Confederate flag and what it represents.

If you are still having trouble deciding on a tattoo or aren’t sure of the artist or shop you should reach out to, please let us know. We offer recommendations to people looking for a little guidance in terms of finding a tattoo artist or shop that will best fit their needs. We recommend taking your time because this tattoo will be on your body for a long time. Choose your tattoo artist wisely.