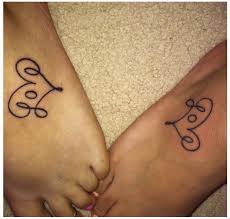 When it comes to have strong bonds, outside of immediately family, there isn’t a stronger bond than the bond had with cousins. Personally, I didn’t have any brothers, so my cousins were like the brothers I never had. Times change and people grow apart but for those cousins that still hold the bond they held when they were kids, cousin tattoos are a great way to express your connection to one another.

The cousin tattoo is something that can’t be taken back and that is the idea. To represent a never-ending connection between two people, a tattoo is one of the most blatant acts of loyalty one can be involved in. When doing this, there many ways getting cousin tattoos can be approached. Below we will discuss what cousin tattoos symbolize and some of the different variations we have seen when talking about this style of tattoo. We hope that by the end of this post you will have a better idea of the tattoo you and your cousin want to get to represent the bond between the two of you.

Cousin tattoos symbolize a life long connection to another person. It represents a promise from one cousin to the other that they will always be there for them. It is always a symbol of love and connection. Nobody gets cousin tattoos if they aren’t fond of each other so keep that in mind going forward.

Matching cousin tattoos are one of the most popular ways to show your affection and loyalty to your cousin. There are so many versions of this tattoo that can be had, we would be here all day if we tried to talk about them all. However, we want to mention a few of our favorites that we have seen.

The tree of life tattoo is one we see on many cousins to symbolize their bond. The tree of life symbolizes the interconnectedness of all living things which happens to include the cousins getting this tattoo.

The matching anchor tattoos for cousins represent the tough trial they may have experienced together. The anchor represents holding steady during the storm. The cousins with this tattoo might have experienced something traumatic together which led them to getting this tattoo. It’s a reminder of the hard times they have endured and proof they were able to make it through.

The girls (or boys) on a swing matching tattoo alludes to childhood and the carefree times that were once had. Swings represent those times when we had no responsibilities and life wasn’t so hard. It’s a steady reminder of the relationship the cousins had back then and to be aware of keeping the connection strong.

We have seen a lot of cousin tattoos that actually say the word “cousin” in a different language. The simplicity of this tattoo is its beauty. It is a brand, of sorts, and when people ask what it means it gives one the opportunity to talk about the cousin to which the bond is shared.

Infinity cousin tattoos seem to be self-explanatory. It’s a representation of the love they have for each other. Telling the world the bond they have between the cousins will last forever. The infinity sign is a powerful one and it is incorporated into many tattoos. It seems to be a favorite when getting cousin tattoos.

Half image cousin tattoos are cool because you can take any image of something that has meaning between the cousins and turn it into a tattoo. We have see the yin yang tattoo be used in this manner before and symbolizing the yin to someone’s yang. Maybe your cousin is wild, and you are the calm one and when together there is perfect harmony. Another fun tattoo like this is the basic heart image. When broken in half, it is incomplete and won’t be whole until the two halves are brought back together. Some cousins have a bond so strong that it feels like they wouldn’t be whole unless the other half was there.

Quotes and lyrics are really popular options for tattoos where you want to show the connection between cousins. We have seen this tattoo in the form of lyrics started on one body and finished on the other. We have also seen quotes or poems used in this fashion. If there was a saying or quote that meant a lot to the cousins thinking of getting tattoos, this might be a great idea. Inside jokes are also great ways to remind each other of the bond and playfulness of the relationship between cousins. This form of cousin tattoo can be anything you want so if you have something meaningful between the two of you, use it for a tattoo.

From the above information, it is apparent that damn near anything can be turned into a cousin tattoo. From lyrics to images, the cousin tattoo can be anything you want it to be as long as it has meaning to the people wearing it.

We hope that by reading this post, you have a better understanding of what cousin tattoos symbolize and you got something out of the examples we offered. If you have your own ideas for your cousin tattoos and need help finding an artist, let us know. The team at Tattoo SEO has years of experience in matching customers to an artist that will make their vision come true.