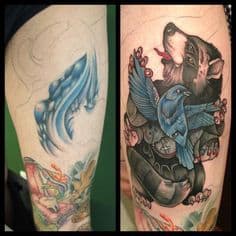 Cover up tattoos are a tattoo that is designed to cover or alter a tattoo that was received earlier but is no longer desired. The tattoos that must be covered up with a new design are often regarded as mistakes or regretted by the individual and is no longer interested in the message that it conveyed. Most often, cover up tattoos are done over top of images as simple as the names or initials of an ex-spouse or ex-boyfriend or girlfriend. It could be as complicated and detailed as a portrait of an old partner or someone who used to be greatly admired but no longer hold significance in the individual’s life. The new design must be large enough to hide the old tattoo or incorporate the old tattoo in a way that changes its appearance and use a color palette that is dark or bold enough to cover the old ink. Regardless of what is being covered, cover up tattoos require a talented artist and the savvy to design an image that conceals an old tattoo in an attractive way without appearing like it.

Names are relatively simple to cover up because any larger image can be placed over top. Most fonts are easy to cover but may provide a problem if there is a lot of additional imagery or line work incorporated into the name. The larger the design, the more difficult to cover but any experienced artist should be able to render the old tattoo design undetectable. Depending on the style and color used in the old tattoo, cover up tattoos must be designed around the existing image. It may have to be dark, to conceal black or grey ink, or use white ink to add details and new images.

In some cover up designs, the name is kept but new work is added to alter the original image. A stamp that reads “void” (or an expletive in some cases) is sometimes added if the individual wants to convey that the name is of an ex lover, or lines crossing out the name to make the intent of the new ink very plain. The word may be manipulated into a new word or phrase that cleverly incorporates the initial word or transforms it into a new one.

Words that are misspelled are frequently the subject of cover up designs. It is rare that the individual choses to receive the same, correctly spelled word or phrase but rather they often chose a completely different design. The new design may reflect the word or phrase that was covered and serve as a metaphor for the old design. For example, in the case that the old design read as a misspelled version of “believe”, the new design could incorporate the individual’s faith or religious beliefs.

Alternately, a cover up design of a misspelled word or phrase will simply include a correction to that word such as the missing letter or word interjected into the design. The new design may be created to appear like an edit or correction, rather than a new design. A red arrow, like what an editor might use, can point to where the correction must be made. This type of cover up is meant to be humorous and make light of the old, unwanted, and incorrect tattoo. This reveals the individual’s lightheartedness and their acceptance of their past mistakes as well as an effort to look to the future with positivity.

More difficult cover up tattoos place much more complicated and skilled designs over top of less credible work that no longer serves the individual. Old and faded designs are tattooed over with fresh, vivid ink in a new design that better represent the recipient. The individual often will have received a tattoo from a friend or inexperienced artist that is looking to gain more experience. That lack of experience is apparent in the tattoo which may then become a piece that the individual regrets and will want to remedy in the future.

Some cover up tattoos replicate the old design but with a more experienced and talented hand, like a better proportioned and detailed portrait that better represents the subject or an animal that appears more realistic than its predecessor. Because portrait tattoos are so difficult to render appropriately and realistically, they are often the subject of cover up designs. A new photograph or image of the person (or animal) may be chosen to cover the existing image to truly cover and eliminate the old design. Most often, the same portrait design is chosen and redone to refresh and rejuvenate the old tattoo design so that the memory of the portrait’s subject remains similar but better.

A portrait is a great dedication to another that is often very meaningful to the recipient. When a portrait tattoo is rendered poorly, the tribute to that person is marred in a way that does not do justice to that person’s memory. Covering the ineffective portrait tattoo with a design that better suits the memory of the portrait’s subject can be an emotional and uplifting experience. A skilled and responsible tattoo artist is the most important facet of the transformation and must be carefully selected.

Other cover up designs are completely different than the old image and allow the individual to conceal the ink that no longer describes them or serves a purpose to them. For these people, the old tattoo is a facet of their past and they do not want to be associated with it any longer. A new tattoo will cover the image that does not complement their personality while providing a new representation of themselves. A cover up tattoo helps the individual move past the previous design and whatever it may have signified to them.

Because lighter colors can be placed over dark, with the right tattoo artist there are virtually no limits to covering up old tattoos. In the best circumstances, even the darkest tattoo can be transformed into a dimensional and attractive design with the right highlighting and contouring. White or colored ink can be used to cover up black and grey in order to lighten an old tattoo and give it more shape. Depending on the type of ink and how well the artist is able to apply it, any color should cover any older color that has been previously introduced into the skin.

Obviously, cover up tattoos are reliant on the size and shape of the tattoo that they intend to cover. The new tattoo must be designed around the shape of the old tattoo or designed larger than the original piece. Some designs may use the old image as background imagery to surround the new design or cover it up completely. Artists will often use the shape and flow of the original tattoo as a foundation for the new tattoo so that the new design fully incorporates the old ink. A well done cover up design will not appear like a “cover up” or allow any of the previous design to show through. The method of coverage should be a discussion between the client and the tattoo artist so that the client will receive the design that they failed to receive in the first place.

More realistic designs are usually chosen to cover up old and unwanted pieces so that the great detail of the new design sufficiently hides the old. Full, blooming flowers are popular in cover up designs because the color and detail works well to conceal darker colors. Cover up tattoos often contain the detail that the original tattoo was missing and may incorporate a more realistic or interesting perspective of the tattoo design than the original.

There are certain tattoo designs that cannot be covered, although a talented and experienced tattoo artist may argue. Sleeves and large tattoo pieces that are well done and incorporate detail and dimension are often too complex to cover. These types of designs may be altered or enhanced but usually cannot be covered completely like a smaller tattoo can. More shading or highlighting can be added to a tattoo design to create a deeper sense of depth. Color may be added to a black and grey design along with white ink to help brighten the image.