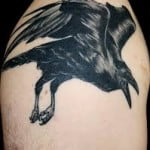 Birds make fantastic subjects for symbolism. Just like the flower, there is a different meaning and symbolism for every animal and within that, birds. From the bald eagle to the sparrow, birds come in all shapes and sizes and they have different personalities to boot. If you know anything about yourself, you should be able to find a bird that fits who you are. In this case we are talking about getting this image tattooed on your body and specifically the crow tattoo.

The crow is a sleek, jet black and thick-billed bird, often considered one of the world’s most intelligent. With their black blue-hued feathers, black feet and beaks, they have often been associated with death and the dark arts of the occult. Their ability to learn and use tools has astounded many, especially considering the size of the bird and its brain. As crows are often incorporated into religious mythology this intellect has been documented for hundreds of years but are most often associated with death, dreams and the unknown realms. Their extreme intelligence has made them useful to ancient human civilizations as messengers and have been revered as the bringers of omens.

Int his post we will discuss some facts about the crows and what these birds symbolize. We will talk about the different variations of the crow tattoo and if the meaning changes when other symbols are added to the tattoo. By the end of this post you should feel more confident in your crow knowledge.

Crows are related to ravens and are even part of the same genus. You can find the crow and other members of the Corvus genus on every continent outside of South America and Antarctica. 40 species of this genus have been named. Some of these birds have been called jackdaws or crows and at the same time, some are referred to as ravens.

Looking back in history, many big birds with ragged feather stuck to their neck have been called ravens. When referring to the birds of the genus that are more of a mid size, most would call them crows while the smallest version of this bird is called a jackdaw. The rook is one of the outliers for a large beaked bird and it got that name because of the strange sound that the birds makes. However, as commonly used as these names for might be, they do not support the latest research nor are they scientific. In addition, the Australian raven is less like a raven and more like a Torresian crow.

When people talk about ravens and crows in the United States, in most cases they are talking about the common raven and the American crow. It isn’t easy to tell these two birds apart but the easiest way to do so would be to look at the size. A raven is about the size of a red tailed hawk and it has a more wedged shaped tail than the crow. Some other differences include the crow not being able to fly as long as a raven, the crow makes the “caw” sound in addition to all of the clicks and rattle sounds it is able to make.

Crow tattoos are generally a masculine symbol perfect for strong-willed men and women but can be feminized to soften the appearance. Roses and other flowers are paired with the crow to evoke the more gentle and loyal side of the bird. Femininity is also associated with intelligence, a key characteristic of the crow, which is brought out with natural imagery like tree branches, leaves, and other foliage and flora. Traditional crow tattoos also feature roses but appear less feminine because of the “Old School” style typical of sailor.

In Celtic mythology, Badb is a goddess of war and death who takes the form of a crow along with her sisters Macha and Morrigan. As a trio, they fly through armies to intimidate and signal grave misfortune for any Gaelic foe. The three crows may be placed in a triangular shape to emphasize the power of three that is associated with the birds and the occult. They symbolize a bad omen and the coming of bloodshed on the battlefield, a warning to all enemies. Badb herself is known as Badb Catha which translates to “battle crow”, a testament to her warrior status. Badb may be pictured with weaponry or in a stance that suggests an oncoming battle or war. She is a representation of a warrior as well as a symbol of battle and overcoming trauma or tragedy.

In many different aboriginal cultures, the crow is a trickster figure that often appears mysteriously in order to teach a lesson. In Australian Aboriginal mythology, the crow often appears anthropomorphized with other birds in various origin stories as a representation of ancestors. As a representation of this, the crow may be pictured with human qualities or objects that symbolize the individual’s heritage and ancestors. Or, to represents a number of legends and folktales, the crow may be depicted with a flaming torch to symbolize the crow stealing fire.

Additionally, many North American Aboriginal groups like the Cree use crows within their mythology as a pedagogical figure that teaches what not to do, sometimes in dream form or as the mythological Witigo.

Even more, a three-legged crow is a common symbol among East Asian mythologies including China and Japan. The Chinese three-legged crow Jinwu serves as a representation of the rising and setting sun. The crow is a mysterious but intelligent and clever figure and when pictured with a third leg, it is a symbol of the sun and was believed to have lived in the sun. To represent this mythology, the crow is often depicted with a sun or circle in the background. It is a celestial and cosmic symbol that represents much more than the Earth; it represents the entire universe. Also known as the kamon in Japanese, it is a symbol of family and union.

More generally, crows are often associated with magic and the occult, spending generations as a symbol of familiars among witches. Crows were believed to take on the dark spirit of a witch and fulfill her bidding. The bird is a wrecker of havoc and mischief in this way. To symbolize this, the crow tattoo may include imagery that represents the occult and witchcraft like a night sky, the moon, or more traditional objects like a witch’s hat or broomstick. In some designs, the crow is pictured with a third eye above the beak to convey a sense of higher and otherworldly power.

The black crow instantly appears baleful with its darting black eyes and their menace is illuminated with the presence of a crow’s murder or flock. Human skulls and other emblems of death and mortality are often included in crow designs to create an ominous symbol. Because of their sinister appearance, they are the perfect image for a tattoo meant to convey mystery and a sense of foreboding.

Crow tattoos frequently depict the crow with in flight with outspread wings to represent the bird’s abilities. Because it is large and black, it appears majestic and authoritative, a symbol of regality and power. The crow has a commanding presence and projects a bold and daring character that reveals similar qualities in the one who receives this tattoo. There are many ways to render the crow including geometrically, with tribal patterns, realistically, or animated. No matter how it is designed, the crow represents a fierce and daring spirit.

Depending on the style that you want to get your crow tattoo inked in, you will want to make sure the artist you choose has experience in tattooing animals. If they don’t you might want to find someone that does and if you need help finding an artist, please reach out to the team at Tattoo SEO. 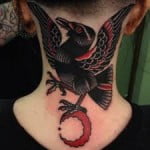 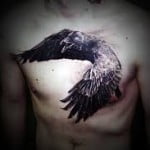 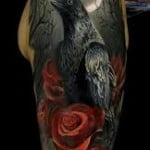 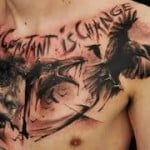 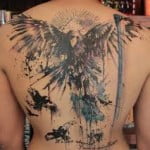 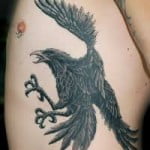 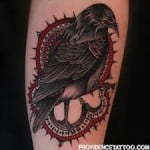 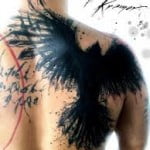 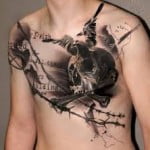 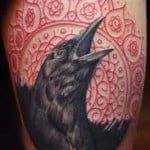 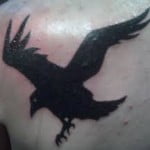 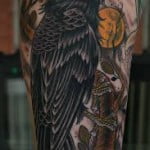