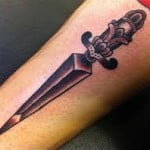 Symbolic and sharp enough to do some real damage, the dagger is a symbol that goes back centuries with a great deal of meaning. Most warriors in history carried some sort of sword or dagger for protection and depending on the kind of dagger you have might change the usage of it. Some were used for protection and some for more practical purposes. The dagger is small but effective which might lead us to some symbolism.

The dagger is also a popular tattoo in many styles. Namely, the American traditional style is one that is often depicting the dagger in the form of a tattoo or adding it to other images to change the imagery of a tattoo. The dagger tattoo meaning can change depending on how the image is being used and the way it is tattoo but nevertheless, it is packed full of symbolism.

In this post we are going to talk about the dagger and give you a little history behind it so you can understand where it came from and what it meant to the people that owned one. It will lead us into some of the reasons that people get dagger tattoos today and it will also get us talking about the symbolism behind the dagger tattoo. There are plenty of different meanings to talk about just like there are plenty of variations for the dagger tattoo and we will talk about what they mean depending on what the tattoo includes. We hope to share some of this knowledge so you can move forward and get your very own dagger tattoo and know what it means.

A dagger is generally a symbol of protection of either the self or others. The short sharp-bladed weapon can be easily concealed so indicates the stealth and cunning of the weapon’s owner. Daggers are ancient weapons that have been forged since the dawn of humanity and were used for close combat with others. Because the daggers are so short, they cannot be used for hunting and are usually only effective against humans. This lends the weapon a clandestine quality, although they are found among relics of nearly every ancient civilization.

Daggers are known to be made of dozens of materials including bone, iron, bronze, copper and gold, often reserved for royalty. An image of a simple iron dagger renders a different image than a dagger of gold or designed with an ornate, marble hilt. The more expensive the material, the more significant the individual. This indicates that a dagger tattoo with a jeweled hilt conveys regality and status whereas one with a wooden hilt or one made of cheap metal could represent humbleness or a modest status.

The jambiya or janbiya (which means dagger in Arabic) is a short dagger with a curved blade that is often used as an accessory. One made with an ivory handle is a symbol of great wealth and stature in several Middle Eastern communities. These types of dagger tattoo designs may include Arabic or African language phrases that clarify the culture with which the wearer identifies. It may convey ancestry and heritage that the individual is proud of and therefore the dagger becomes a symbol of pride and patriotism.

A dagger is also a blatant symbol of manhood and coming of age because of its phallic shape as well as the association between masculinity and warriorhood. Dagger are used as close contact fighting weapons in various countries around the world. The dagger is also an emblem used by the U.S Army Airborne Special Ops and by those who have completed the British All Army Commando Course. This is generally symbolized by a modern dagger with a short, thick blade and a handle with a rubber grip. Regardless of man or woman, the power and authority that is connected to the dagger is an appropriate symbol for any strong spirit.

The dagger is a common symbol among many religious cultures. It is most commonly used as a symbol of protection and, more modernly, a remnant of traditional dress. Sikhism, a religion of South Asia, requires all of its followers to wear a kirpan, an ornate dagger that symbolizes courage. The kilaya is another type of dagger and is used in Tibetan Buddhist rituals to establish a connection between the owner and the earth. Additionally, Sgian-dubh is the traditional dagger worn by the Scottish Highlanders as a part of their traditional dress. It was simply used as a tool before modern times and has since become a symbol of Scotland’s history.

The dagger is quite often an incredibly personal item and routinely worn for protection or survival. When the image of a dagger is worn, it conveys a forewarning to others that its wearer is on the defensive. Brandishing a dagger portrays a willingness to provide protection in an uncertain situation. In this way, the dagger is a symbol of courage, strength, and authority.

Dagger tattoo designs are often designed with roses or other flowers to both create more aesthetic appeal and reveal the history of the specific dagger. Arabic daggers made include flora taken from the Middle East to help clarify the region that the dagger originated in. Suns and moons may be included as well or other religious symbols.

Traditional dagger tattoos reminiscent of the “Sailor Jerry” style are known as Old School tattoos and are done relatively simply with bright and one-dimensional colors. These daggers are frequently designed as piercing through various objects like hearts, body parts, flowers, animals, and other things. Daggers piercing through ferocious animals use the animal as a symbol of hardship that the individual has triumphed over or surpassed. A dagger piercing through a hand, often held by the opposite hand, is a representation of self-harm and self-destructive behaviors. Traditional dagger designs also may include a serpent winding around the blade and is known as a Caduceus, a Greek or Roman symbol associated with healing.

Daggers stabbing through body parts, particularly hearts, can be symbolic of the individual themselves and a disease or other intimate struggle. A dagger through a heart may also serve as a symbol of heartbreak or the loss of a loved one. The dagger and heart in this way is a tribute tattoo and often includes dates of birth or death and banners with names or messages that represent the loved one.

In some designs, a dagger is rendered as piercing through the individual’s body in order to convey betrayal. Many people receive this type of design as a personal reminder to keep themselves guarded and take precautions in the future.

History of the Dagger

The dagger is one of the earliest used weapons in medieval times. This weapon is a double edged blade that is short enough to conceal but long enough to do great bodily harm. It is considered to be one of the most famous weapons of all time and has been used in close combat scenarios for centuries. You use this weapon by either slashing or thrusting the blade into the desired object or person.

It is common though that daggers evolved out of prehistoric tools and therefore, nobody is quite sure who invented the dagger. When daggers were first being made, they were crafted out of sharp bones, rocks or flints and had been used as a weapon ever since.

They eventually started being made of metals and one cool fact about the dagger is that in 1924, two of them were found when opening the tomb of Tutankhamun. One of these daggers was made with smelted iron while the other was made out of gold.

The term seax or hewing knife took the place of the name for the dagger in the Early Middle Ages and in the 12th century or the Late Middle Ages, the term “dagger” made a comeback. It was in these times that the dagger was being made as a common tool for people to use.

In battle, the dagger was often used as a backup form of protection. The warrior would run into battle with a primary weapon like a broadsword or mace and then if they were somehow disarmed, they would pull their dagger from its sheath and use it on the enemy.

The dagger is the kind of weapon that was used in the Middle Ages by feudal armies. During these days, all men were expected to learn and know how to fight. They were also expected to be available and prepared to be called on at anytime so they could to into battle on short notice. In fact, young mens’ lives revolved around military training and it was incorporated into almost every facet of their lives.

Understanding how to use the dagger was crucial in times like these. Warfare was a common theme and to be able to know and understand how to use a dagger could be the difference between saving your life or dying.

During the times of World War I, the dagger made another comeback as there was a lot of close quarters fighting. The dagger also replaced officer sabres which were too clumsy and long for fighting in the trenches. In these times, the dagger was a symbol of having served on the front line in battle and therefore, the dagger was had with much pride.

In terms of cultural symbolism, the dagger is ambiguous. We went over some of the meanings and symbolism earlier in this post. They are also used in the insignia designs for many elite special forces or military units. The Commando Dagger patch is worn by British soldiers who finished the All Arms Commando Course and it is also worked into the insignia f the US Army Airborne Special Operations. The dagger can be a representation of treachery because of how easy they are to hide, stealth and deception. These makes sense as many assassinations in the world have been carried out using a dagger. In fact, Julius Caesar was assassinated with a dagger. Some military organizations and cultures use the dagger to represent daring and courage in combat.

However, these are only suggestions about what the dagger symbolizes and different ways you can get this tattoo. No matter what it means to you, it is a great looking image that will have people asking you what its all about. 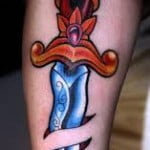 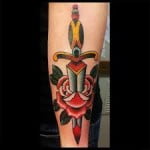 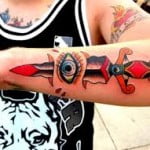 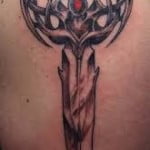 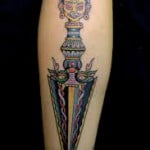 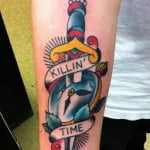 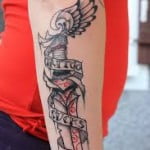 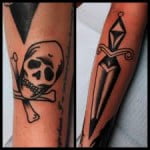